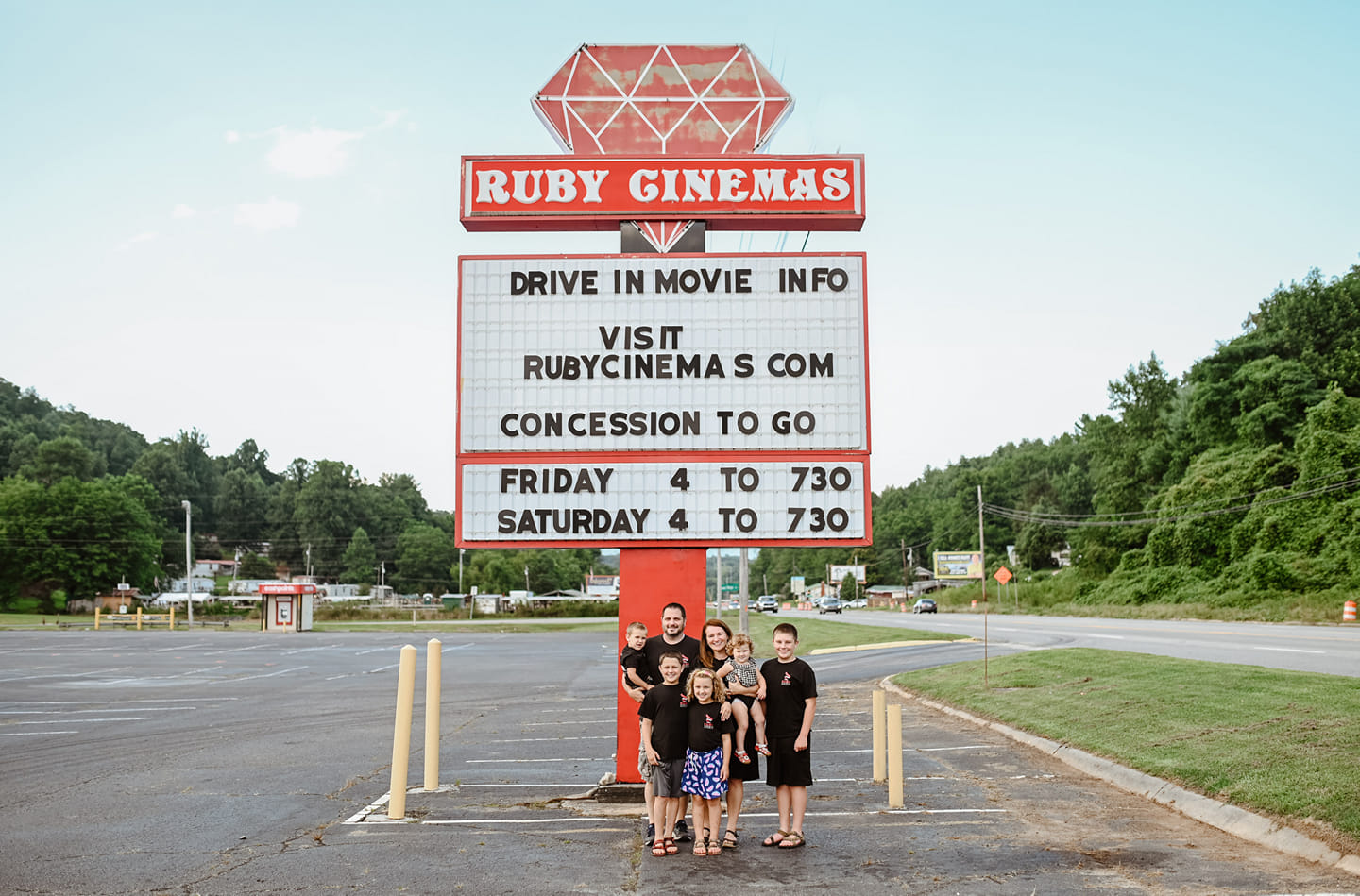 Today marks the 127th day since Governor Roy Cooper issued a lockdown in North Carolina to slow the spread of COVID19, making today the 127th day Ruby Cinemas in Franklin has been closed for regular operations.

Ruby Cinema owners David and Holly Parlier understood the Governor’s Executive Order in March to slow the spread of COVID19 and keep the community safe. As a non-essential business, the movie theater closed their doors and waited for further direction from the state. When it came time for the state to move into Phase 2, a time when many businesses across the state were permitted to reopen, the Parlier’s were heartbroken to learn that movie theaters were one of the few businesses ordered to remain closed.

However – the owners adjusted. They began getting creative to generate some type of revenue. First, the offered weekend concessions for families to purchase in a drive-thru option and take back home. The theater continued that waiting for the state to move into Phase 3 – only to learn that Phase 2 was extended. Weeks of being closed turned into months. Ruby Cinemas once again adjusted, this time launching an outdoor movie option – a welcomed treat for residents going stir crazy from the lockdown with the safe options of watching movies from the safety of a vehicle.

Then last week the Governor announced yet another extension to Phase 2, this time for 5 weeks. Meaning the small-town movie theater which has served Macon County for decades, would remain closed until at least the middle of September.

That is when the Parlier’s decided to try a different approach. The couple set out to put a face with the business and encourage the state to reconsider closing movie theaters.

“We have been actively campaigning for our business to be allowed to reopen using more traditional methods over the last few months,” said Parlier. “While we have received some positive responses from various state representatives, the governor’s office has basically ignored our phone calls, letters, and emails.”

Yesterday, Parlier made a post on Governor Roy Cooper’s Facebook page pleading for him to reconsider the current Executive Order and asked theater patrons to do the same if they agreed – and boy did they.

In less than 24 hours the post had been shared nearly 1,000 times with hundreds of comments urging the Governor to allow theaters to open and telling stories of first dates and family traditions all made possible because of Ruby Cinemas’ community roots.

“My wife and I have been very touched by the outpouring of support,” said Parlier. “We did not expect so many people to comment- we were hoping for maybe 50 comments.  To see that so many want us to open and care about our success is very heart-warming.  It made our day for sure!”

Parlier is hoping the power of social media will reach the Governor’s office in a positive manner.

“The use of social media platforms to reach the governor was more of a last resort as there can be negative consequences depending on public reaction. However, with each passing month the mandated closure by the governor’s executive order has made the situation more dire,” said Parlier of the decision to turn to Facebook. “It was past time to use every resource available in hopes of reaching the governor. Social media also gives us the opportunity to show a photo of our family that lives here locally in Franklin, NC. I think it is helpful for the governor’s office to be reminded that every business isn’t a large corporation with an executive board. His decisions, although maybe with good original intention, are now financially damaging small families and negatively impacting already struggling small communities around the state.”

Parlier said the innovative business strategies attempted to mitigate the revenue losses, but it isn’t sustainable.

“Both our Concession To Go and Drive-In programs have helped to slow the losses directly resulting in the mandated closure by the Governor,” said Parlier. “It is with the help of our loyal patrons that we have been able to survive the now 21 weeks of closure. We have one wonderful lady who has purchased a ticket for every drive-in movie- every single one! And we have multiple patrons who come to the drive-in every weekend, as well as people who buy concession to go every weekend. We cannot say enough about the support we have received from our community. However, we have seen a steep drop off in Concession to Go over the last months and we expect the drive-in movies to slow down as school starts.  As of the end of July, my business has seen an 83% decrease in revenue, and profit is well into the negative now when compared to the year before. Regardless these programs will continue as they are still an essential lifeline and we love the patrons that continue to support us however they can.”

The urgency in reopening is more important as ever as federal assistance for businesses have long since expired.

“I did receive a small amount of assistance from the PPP that was established by the federal government,” said Parlier. “We made the decision to use 100% of these funds for payroll (15 employees) even though a portion could have been used for other approved expenses. However, this program was only designed to support payroll for 8 weeks and these funds have been depleted now that I am on week 21. The federal government is working on a couple of new programs but when those will get approved is anyone’s guess. There are a few other federal programs but those result in my business having to take out more interest-bearing loans. A bunch of additional debt is not going to help my business and only further cripple it once we are able to re-open.”

Remaining optimistic that the Governor will amend his order to allow theaters in NC to open, Parlier has designed a safety plan to ensure safe operations if permitted to reopen.

“We would install Plexiglas barriers in front of my concession terminals and install wall/window decals promoting social distancing, washing hands, and wearing of face masks (English and Spanish),” said Parlier. “We would also install floor decals to provide proper social distancing for those waiting on concession or tickets and employees will continue enhanced cleaning / sanitizing procedures.”

Other measures are similar to retail businesses allowed to operate such as having employees continue to use face masks and follow check-in procedures concerning their own personal health as well as continuing the option of mobile ordering that is currently being used at my pop-up drive-in, which could reduce lines at the concession.

Parlier said the theater also has the capability to reduce or eliminate the online ticketing fees to encourage patrons to utilize this service and would implement staggered showtimes to reduce the number of patrons entering or exiting at any given time.

The theater would also increase outside airflow within the auditoriums which currently have auditoriums with 20+ ceilings with two self-contained ceiling-mounted HVAC units in each auditorium. Parlier said he would follow social distancing requirements and operate at a reduced capacity.

“My business will also support and follow the guidance of the re-opening plan that is being put together by the National Association of Theatre Owners,” said Parlier. “This plan is basically completed and hopefully I will be able to share publicly within the next few days. One of the most significant parts of this plan is that it will have the approval of a known infectious disease specialist (epidemiologist) currently with the UCLA medical center.”