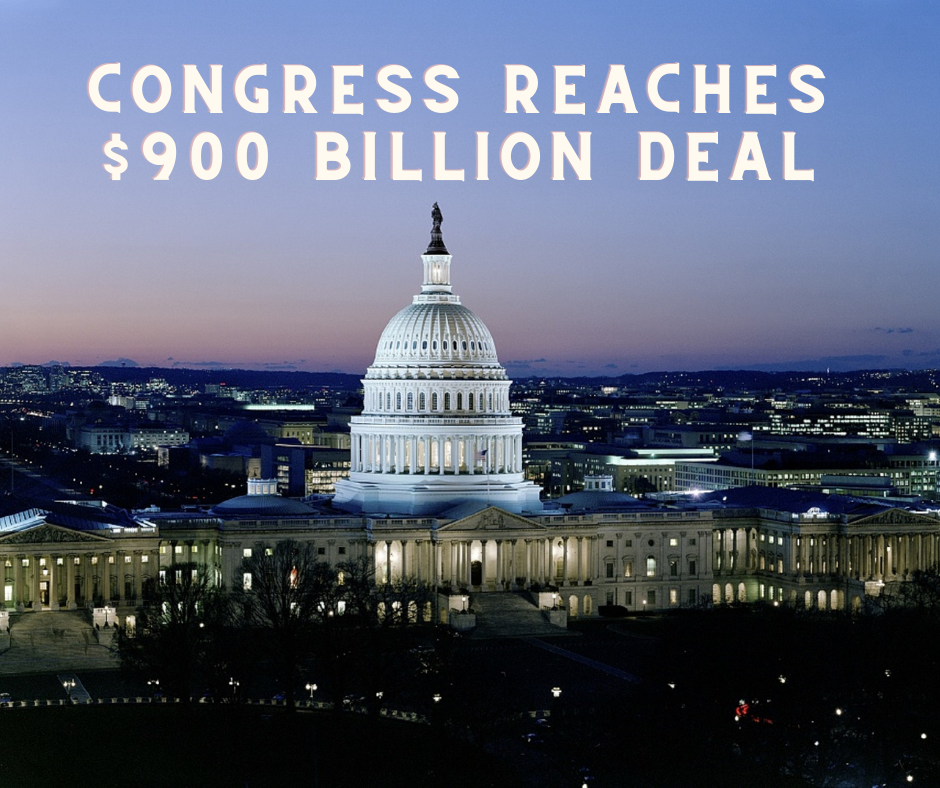 After working through the weekend, Congress reached a deal late Sunday night for a second-round of coronavirus relief funding for the nation.

Senate Majority Leader Mitch McConnell and Minority Leader Chuck Schumer announced Congress approved a $900 billion relief package. Lawmakers are set to approve the bill as early as tonight. Along with the relief package comes a full-year government spending bill, needed to avoid a government shutdown. In total, Congress will approve $2 trillion in spending.

“At long last, we have the bipartisan breakthrough the country has needed,” Senate Majority Leader Mitch McConnell, R-Ky., said on the Senate floor Sunday.

House Speaker Nancy Pelosi, D-Calif., and Senate Minority Leader Chuck Schumer, D-N.Y., called the plan a “package that delivers urgently needed funds to save the lives and livelihoods of the American people as the virus accelerates.”

While negotiations continued over a spending bill for the Federal government, a shutdown would go into effect at 12:01 a.m. without an agreement. Congress once again approvee a one-day spending bill on Sunday while waiting for a full vote from the Senate, which was finalized Monday and sent to President Donald Trump.

In a speech Tuesday night, President Donald Trump announced he would be sending the relief package back to Congress and wanted to see more than $600 to Americans. Trump called for up to $2,000 for individuals and $4,000 for married couples.

While President Trump referred to funding in the bill for foreign governments under humanitarian efforts as wasteful and demanded an increase in direct payments for Americans, he did not specifically say he would veto the bill. If he does veto the bill, Congress has the votes to override the veto

Much of the debate in Congress centered around checks to Americans. Democrats argued for payments directly to citizens while Republicans fought for more money for businesses.

While the first Federal stimulus sent $1,200 to Americans, the second round of checks will be half that at $600 to most adults and $600 per child, according to a statement released by Pelosi and Schumer.

The second relief package is expected to also include $284 billion into the Paycheck Protection Program for small businesses and another $20 billion in small business grants, comparable to what was allocated in the first CARES Act earlier this year. The agreement includes over $284 billion for first and second forgivable PPP loans, expanded PPP eligibility for nonprofits and local newspapers, TV and radio broadcasters, key modifications to PPP to serve the smallest businesses and struggling non-profits, and better assist independent restaurants.

The second relief package also includes a specific $15 billion pocket of money for live event venues, independent movie theaters, and cultural institutions, many of which remain closed or are operating at a small percentage of their overall capacity. The agreement also includes $20 billion for targeted EIDL Grants which are critical to many smaller businesses on Main Street.

As COVID19 cases continue to rise across the country, the relief package specifically earmarks $30 billion for the “procurement and distribution” of vaccines, two of which have now been approved by the FDA.

To aid hospitals struggling with the second wave of COVID19 cases, Congress agreed on additional funding for hospitals, as well as schools and colleges. The agreement provides $82 billion in funding for colleges and schools, including support for HVAC repair and replacement to mitigate virus transmission and reopen classrooms, and $10 billion for child care assistance to help get parents back to work and keep child care providers open.

The agreement invests $7 billion to increase access to broadband, including a new Emergency Broadband Benefit to help millions of students, families and unemployed workers afford the broadband they need during the pandemic.