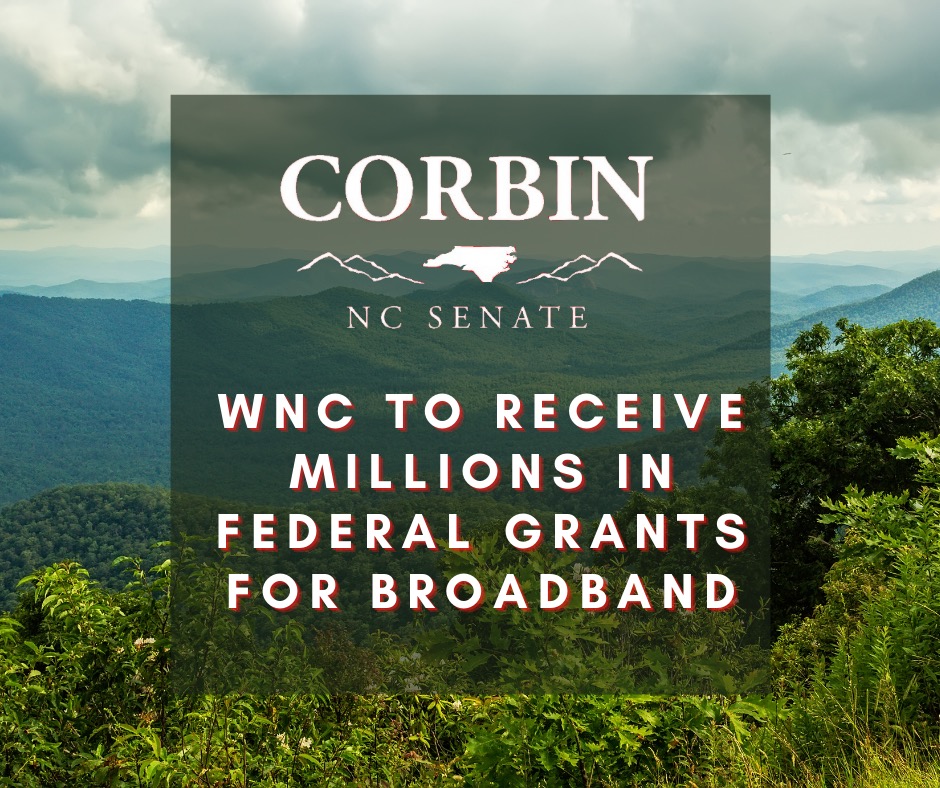 North Carolina State Senator Kevin Corbin (R-Macon) began working on getting internet grant money to Western NC as soon as he was elected to the state legislature.

“One of the very first things I campaigned on was getting internet to the folks of WNC and I am so proud to be delivering on that promise,” said Senator Corbin.

Four years ago, as a member of the NC House, Corbin and fellow House member Josh Dobson wrote the HB431, also known as The FIBER Act. The FIBER Act would have allowed cities and counties to invest in the internet infrastructure and then lease to providers. Large internet providers fought the bill but out of those discussions, NC’s GREAT Grant program was formed. Those GREAT grants have amounted to a total of $99 million over the past four years with a significant portion of that money coming to Western NC.

Corbin, along with many other members of the legislature then began to lobby the Federal Government to get involved and fund rural grants. Corbin worked closely with Congressman Mark Meadows, who then went on to become Chief of Staff for President Donald Trump, worked along with other legislators to get money in the budget for rural internet across the United States.

The grants have now been allocated and the “auction results” have just been released. The news is extremely favorable to Western NC.

“The Federal Grants coming to NC amount to a total of $166 million. $45 million is going to Haywood and West,” Senator Corbin said. “A total of 155,000 customers will be hooked up to High Speed Internet in NC and we are getting 35,000 hookups in the seven Western Counties.”

The bid process is referred to as a “reverse bid.” A dollar figure is given to the bidders and they bid by saying how many customers they can hook up for the money. In addition, the providers have to provide some matching funds for infrastructure which makes the fund go even further.

The Rural Digital Opportunity Fund will ensure that networks stand the test of time by prioritizing higher network speeds and lower latency, so that those benefitting from these networks will be able to use tomorrow’s Internet applications as well as today’s.

The funds were allocated through the Federal Communications Commission (FCC) and they conducted the bid process. By the way the grants are written, this first phase has to go to Census Clusters that are unserved by High Speed Internet. Phase II will be bid later this year and goes to the next group with has some, but very limited, internet connectivity.

Corbin said he and other Western NC legislators will be working closely with the State IT Department and the providers to make sure the work gets done in a timely manner.

“The grants allow up to 6 years for the customers to be hooked up,” Corbin said, “but that is too long.” Work should begin within a few weeks and customers will begin receiving their service shortly.”

WNC Counties benefiting from the federal funding are: