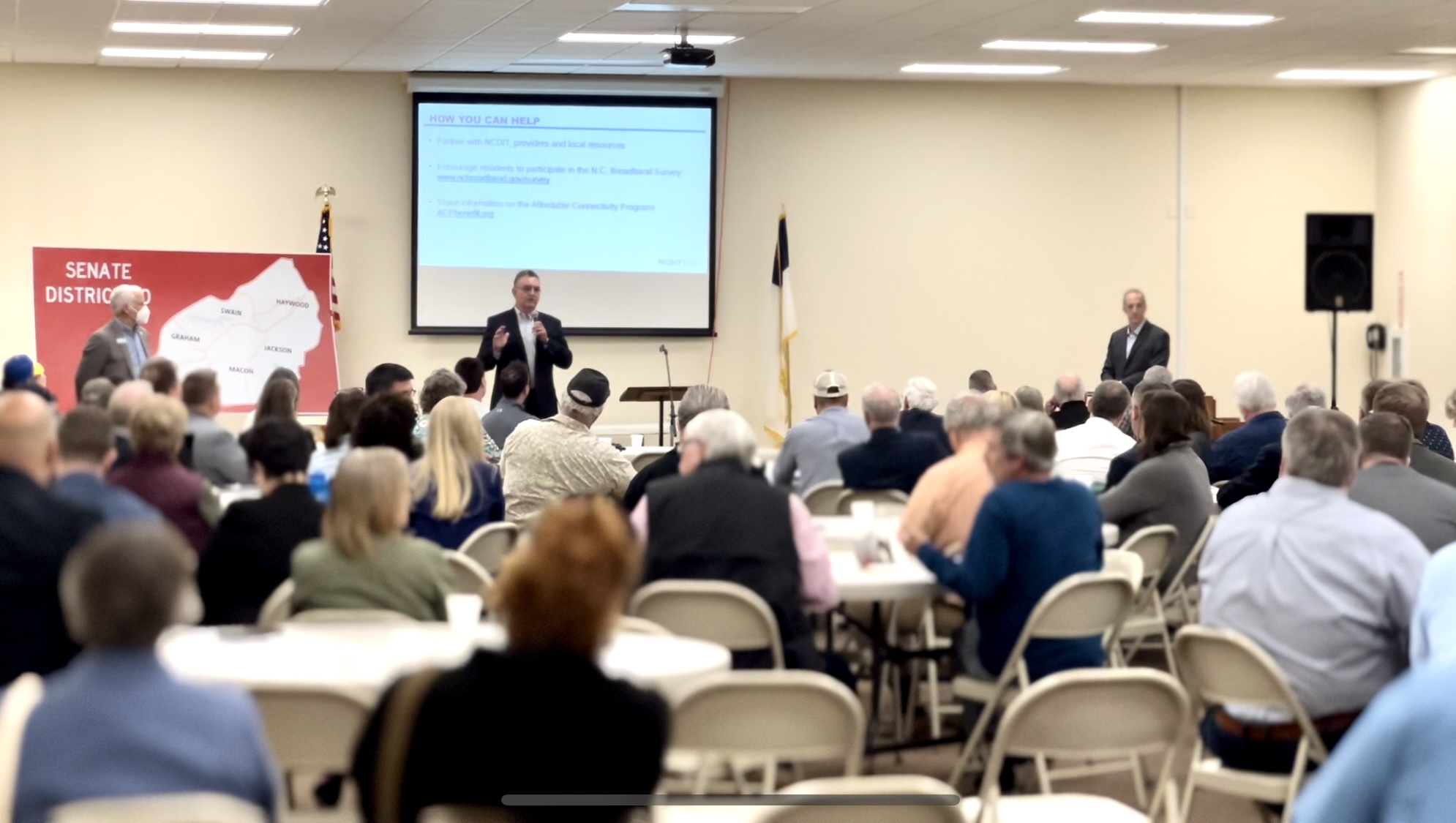 The event, which was the first of its kind in the state, highlighted the millions of dollars available in federal funding across North Carolina. Senator Kevin Corbin worked with Rep. Karl Gillespie, Rep. Mike Clampitt, and Rep. Mark Pless to organize the event.

“We got a once in a lifetime opportunity with the funding that’s come down from Washington DC,” Nate Denny told a crowd of around 200 stakeholders comprised of elected officials, community members, and the general public.

While state leaders were hesitant to put an exact dollar amount on the amount of potential funding that will be earmarked for WNC, Senator Kevin Corbin said he thinks it would be upwards of $25 million. The $25 million touted by state officials on Monday are part of American Rescue Funds allocated for broadband infrastructure growth and improvements. Those funds are in addition to $350 million available in the state’s GREAT  (Growing Rural Economies with Access to Technology) grants. Applications by internet service providers for portions of the GREAT Grant funding are due April 4, and awards are expected hopefully sometime in June. Once awarded, internet providers, will then begin work across Western North Carolina.

In all, NC has allocated $971 million to ensure the availability of internet service at speeds of at least 100/20 Mbps for more than 98 percent of North Carolina households.

The funds are earmarked as follows:

Additionally, $50 million has been set aside for awareness and digital literacy and $15 million to supplement existing state administrative capacity to support high-speed internet efforts.

According to Denny, North Carolina will be dividing $1 billion for this purpose between the state’s 100 counties in order to reach underserved homes still without reliable internet access. The state will determine the amount of funds distributed to each county based on an online survey, which only takes about five minutes. Funding will be competitive, and discovering where broadband is lacking within the county is vital to securing money from this one-time opportunity.

Understanding the irony in asking residents to complete an online survey, via the internet, to notify the state of their lack of access to the internet, Denny noted that state residents can also call in to conduct the survey.  Residents without internet service but with phones capable of text messaging can text “internet” to 919-750-0553. Standard text messaging rates will apply. Residents with landlines or cellphones that do not have texting capability may place a voice call to 919-750-0553. An interactive voice response system will guide them through a series of short questions to obtain the caller’s address and register it in the database as having no internet capability at all.