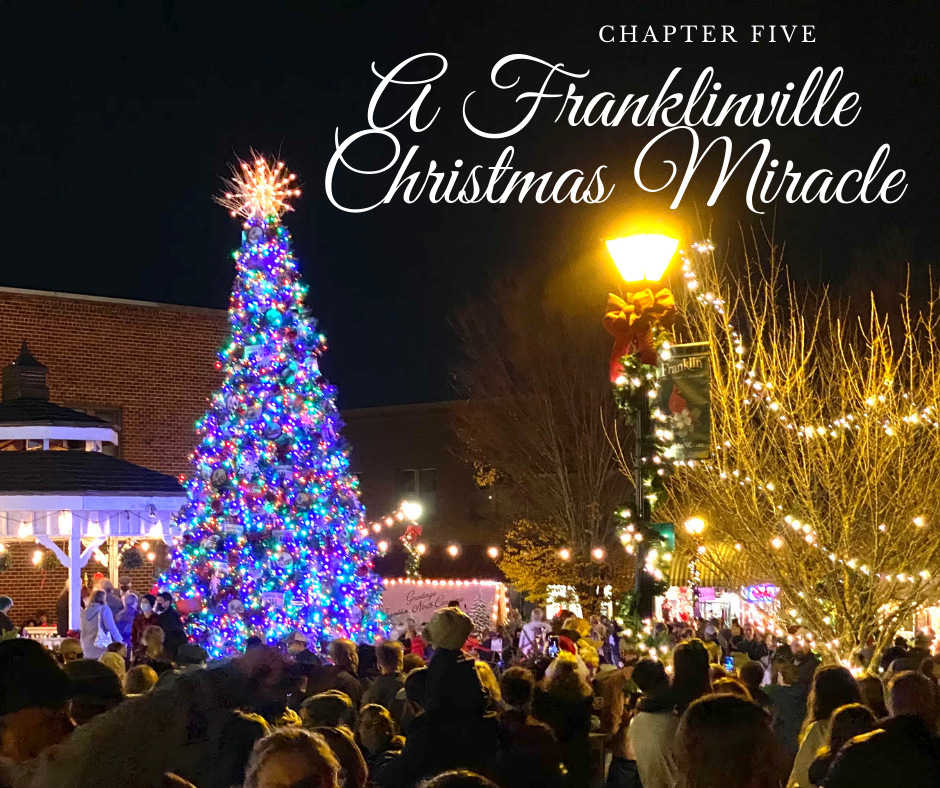 Despite feeling guilty for his part in buying out the Franklinville Scoop, Dustin headed home to get ready for the big parade — his last duty in his hometown before writing a check and hitting the highway. At home, his mom helped straighten up his suit and fluff the pillowcases that gave Dustin his signature jolly belly. But she knew there was something bothering him. Dustin told him that his week at home has changed the way he sees everything. It was making him think that maybe the big career and the big salary wasn’t all there was to life — and maybe there was more to be discovered if you slowed down long enough to figure it out.

With all kinds of thoughts swirling in his head, Dustin headed to town hall to climb into Santa’s sleigh for the Christmas Eve parade. With Christmas Carols ringing out over the speaker, Dustin waved for what felt like miles to smiling faces lining the streets. Santa and his sleigh were the last float in the parade and was the highlight of the holiday season for the entire town. Seeing everyone come together for the parade and seeing the joy on their faces was the best Christmas gift Dustin could have asked for. As he rounded the corner of Palmo Street, he recognized that long blonde hair from a mile away and couldn’t help but smile. Tiffany and Hunter were waving and shouting Merry Christmas. In that moment, Dustin realized what he needed to do.

As the parade ended along Lowlands Road, he jumped out of his sleigh and rushed up to town hall. Just as the janitor was turning off the lights for the day, he made his way inside searching for Mayor Scatt. Mayor Scatt had just straightened up his bow tie and put on his winter hat when Dustin barged in and announced he wanted the job of Mayor. He wanted to remain in Franklinville and take over as Mayor to help his hometown. With no other applications to consider and the deadline quickly approaching, Mayor Scatt was glad to shake his hand and offer him the position.

While caught up in the excitement of his new career, it dawned on him that he needed to get to April before she signed the deal! Dustin rushed across town to the Franklinville Scoop but it was too late. The office was closed and a sign hung in the window saying the Christmas Day paper would be on stands in the morning.

Frantically trying to find April, Dustin tracked down Tiffany for help. Tiffany said April was probably up at Yawah Bald to get the best view of the Christmas Star. Tiffany and Dustin rushed to Yawah Bald and found April at the top of the tower looking up into the stars. For miles and miles, you should see mountains with the lights of Franklinville flickering below.

Dustin told April not to take the deal and that what the Franklinville Scoop means to the town is more important than any amount of money. He told her that he wanted to invest in the newspaper and help to keep the tradition alive. Confused by his gesture, both April and Tiffany were stunned to learn Dustin decide to return home to Franklinville.

Dustin told April he couldn’t bear the thought of the town losing its newspaper and wanted to see it continue for years to come. Then he turned to Tiffany and told her that she and Hunter reminded him what Christmas was really about and that he wanted to stay in Franklinville and build a life with them.

As the Christmas star twinkled in the sky, snow began to fell around Yawah Bald and church bells could be heard in the distance. A true, Franklinville Christmas Miracle.

The End! I hope you enjoyed reading this short story! If you missed any parts, start from the beginning HERE