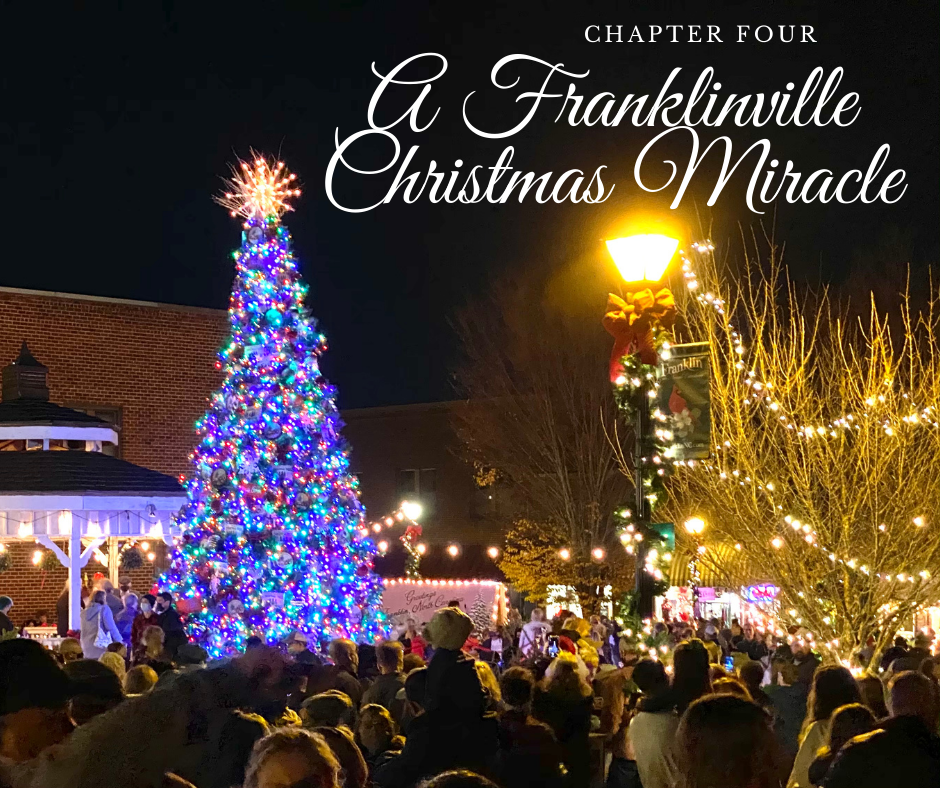 Dustin barely had time to grab a bite to eat before April asked him to help with the annual Shop with a Cop program with local law enforcement. Police Officers were spending the day taking children in need shopping at local businesses around town and they were a few officers short. April, who was already pulling double duty as a reporter and a shopper with her sweetheart Sergeant Lighthouse, asked Dustin to help wrap presents during the event. As he headed into the Flossy Pebble on Main Street, he noticed Tiffany and Hunter shopping in the toy section.

As he started to say hello, he realized that neither of them recognized him out of his Santa suit. After Tiffany made the connection, she was startled at how handsome Dustin was, once he lost the beard and red tights. Turns out, Tiffany had also volunteered to help wrap presents. The two spent the rest of the day laughing and getting to know each other.

Tiffany hadn’t laughed like that since she lost her husband and Dustin had never slowed down long enough to get to know someone like Tiffany. He was in awe of the way her blonde hair fell beside her cheek and how her eyes sparkled, even when she was talking about how hard the past year had been. Dustin was living his dream in the big city. Or what he thought was his dream. All while people like Tiffany were struggling to make ends meet on the salary of a public school teacher. But Tiffany told him it wasn’t about the money. Sure it was hard sometimes, but making a difference in the lives of children made it all worth it.

After the presents were wrapped Dustin headed home to get ready for the Christmas Eve parade the next day. All he could think about was Tiffany and how she made him feel. He already knew he would be staying in Franklinville into the New Year to help his parents around the house, but maybe he needed to think about staying longer.

The next day, Dustin woke up bright and early. He had a lot to do before the Christmas Eve Parade to get the papers drafted for the deal to purchase the Franklinville Scoop. His boss was on him about getting the papers signed on Christmas Day, it wasn’t a holiday in the season, just another workday. After he closed the deal, Dustin planned to take a couple of weeks off of work but knew even though he felt something special with Tiffany, it was probably best for him to go back to the city then.

Dustin finished the paperwork and headed to the Franklinville Scoop to deliver everything to April. April had been working through the night to get the paper finished before the parade. When Dustin walked into the office he was greeted with April’s smiling face holding a draft of the front page of the paper. Just below the headline:  “Hometown hero keeps Christmas alive in Franklinville” was a picture of Dustin with Tiffany and her students, with Hunter right on his lap. Dustin couldn’t believe it.

Right below the fold and Dustin’s goofy smiling face in a Santa suit was the headline, “Search for Franklinville’s next Mayor begins.” The news of Mayor Scatt’s retirement had been spreading like wildfire and the town needed a new mayor before the New Year.

April was so excited to show Dustin the front page — her passion for the newspaper and hearing her talk about how when those little boys and girls grow up they would show that newspaper to their children, and their children, and their children, and tell about the time they met Santa and were on the front page of the newspaper. Dustin realized that digital news didn’t have the same impact, it didn’t carry the same weight. No one was printing out newspaper articles from online to save and cherish. That was the first time he realized why April was so reluctant to give up the Franklinville Scoop. She wasn’t holding on to the business, she was holding on to the tradition. A tradition Dustin was destroying for a couple of dollar signs.