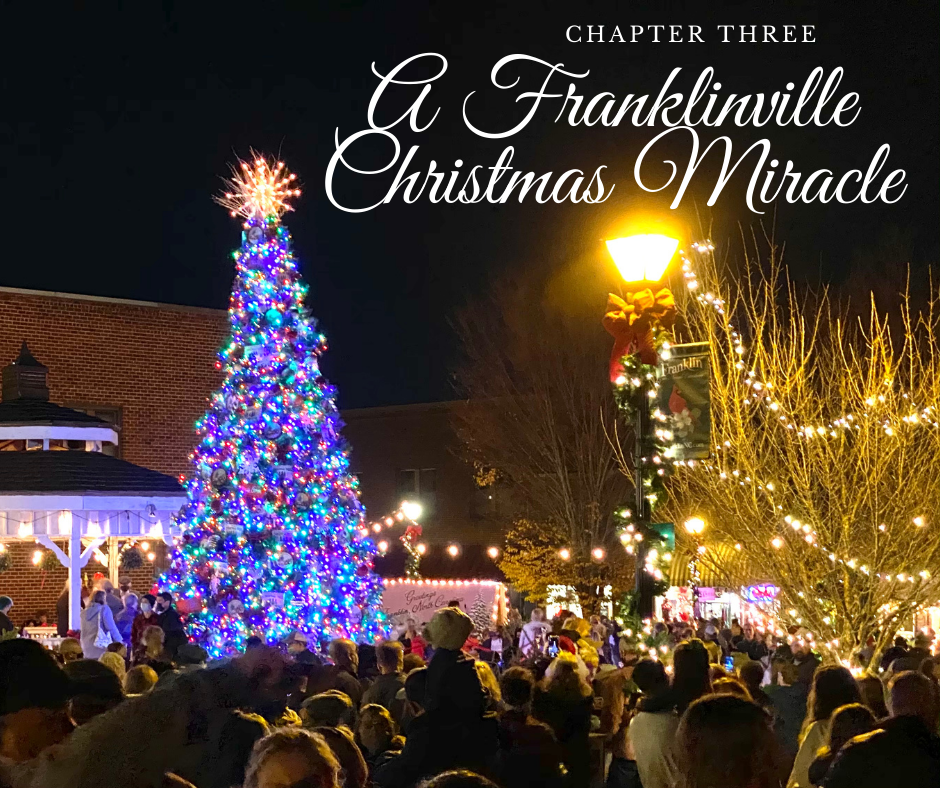 April was always at peace on the Greenway. It followed the edges of the Little Franklinville river and circled the entire town. For as long as April could remember, whenever she needed to disconnect and just think, she would retreat to the Greenway. About a half a mile into her walk, April looked up and noticed a familiar face walking toward her. It turns out, she isn’t the only one who found solace on the Greenway. Dustin had made his way to the path to gather his thoughts as well.

Dustin said that being home sparked memories inside him he had forgotten and it was nice to be reminded of what really matters. Which his dad out of commission, Dustin said he was thinking of taking some time off work to stay in Franklinville and help his mom around the house. Seeing Dustin willing to step up, a lightbulb went off in April’s head — Dustin would make the perfect Santa stand-in! Dustin did not even want to entertain the idea, as Christmas was his dad’s thing and not something he wanted to get wrapped up in — but when April told him that she would sign the deal to buy the newspaper if helped bring Christmas to the folks of Franklinville, Dustin couldn’t say no.

Mayor Bab Scatt stopped by Brice’s home to check on him the next morning, right as Dustin was getting ready to try on the Santa suit for the first time. Mayor Scatt and Brice had been friends for years and Mrs. Scatt wouldn’t stop nagging him until he delivered a mason jar full of her special secret recipe that can cure any ailment. Brice and the Mayor joked about how they were both getting older and Mayor Scatt announced the Christmas Eve parade would be his last event as Mayor as he had decided to retire. While he was worried about who would replace him, his wife needed him home.

After Mayor Scatt headed on his way, Dustin sighed and rolled his eyes as Brice made sure every last button was perfectly in place. Brice knew that if Dustin was ever going to pull off being Santa, winning over Miss Tiffany’s first-grade class was the golden ticket. Miss Tiffany was Christmas personified. Her classroom was transformed into the North Pole every year and her children spent every day of the month of December learning about a different holiday tradition. This year, Miss Tiffany’s Christmas spirits were down, as it was the first Christmas since her husband passed away last New Years’. This year had been hard for her and her son, but she had been looking forward to her annual classroom visit from Santa to bring the Christmas Cheer she needed.

With April driving the sleigh — Dustin’s old Yoder he had in high school, the two-headed to East Macon Elementary with toys for all the boys and girls.

Skeptical Dustin could fill Santa’s shoes, Tiffany was worried the children would catch on to the switch. It wasn’t until her own son, Hunter, walked up to Santa and took him by the hand that she realized everything was going to be ok. Hunter lead Santa to the front of the class and introduced him as Santa Claus. Dustin quickly realized that Hunter was the little boy he saw on the Square who asked for a candy cane for his mother. After losing her husband the year before, Tiffany has been struggling to provide for herself and her son on her public school salary alone. But that didn’t stop her from loving her students and making sure they had the best Christmas possible.

Hunter proudly told his whole class that Santa had already granted him his one Christmas wish and that he was the real deal. Tiffany was beaming with pride watching Hunter take to Santa Dustin. Hunter stayed by Dustin’s side as they sang Christmas Carols, decorated Christmas cookies, and then passed out presents.

Watching Dustin bring cheer to the boys and girls in her class, was exactly what Tiffany needed to believe in the magic of Christmas again.

As they left the school building, April breathed a sigh of relief. She never would have believed Dustin could pull it off, but it turns out, he was a pretty good Santa. The pictures April took of Dustin with the children was going to make the perfect Christmas Day front-page — and the story of how Christmas was saved was going to make headlines. Even if it meant giving up Franklinville Scoop, it was worth it to know that Christmas would be saved in Franklinville.