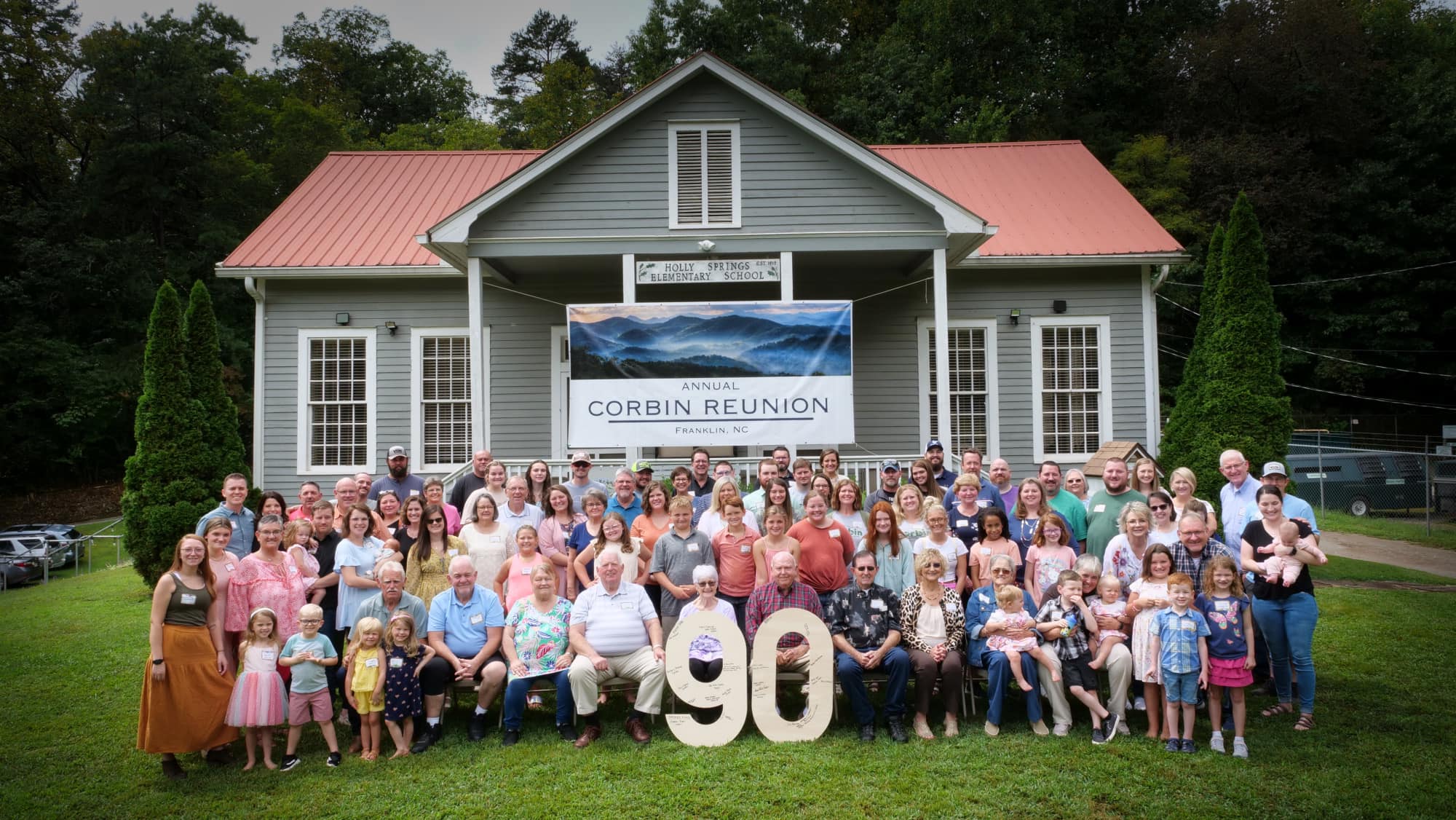 The Corbin Family in Macon County celebrated its 90th family reunion over Labor Day reunion. The annual event brought over 100 relatives together, and while half still reside in Macon County, this year’s event also brought relatives from South Carolina, Georgia, Tennessee, and Kentucky.

The annual reunion welcomes the decedents of John and Nancy Mcclure Corbin, the first Corbins 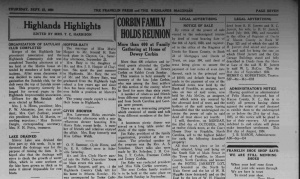 to settle in the region. John Corbin was born on October 8, 1807, and Nancy Mcclure was born on June 2, 1808. The couple wed on April 26, 1825, in Haywood County, where they lived in the Crabtree Section until the early spring of 1837. After having three children together in Haywood County, the couple made their way West and settled in an unspoiled cove in Northern Macon County.

John and Nancy spent their first years in Macon County clearing land, planting and tendering crop, and creating a homestead that relatives still enjoy nearly a century later. Macon County’s first Corbin Family lives in a log house with a dirt floor for four years until they were able to construct a home considered “modern” for its time — in 1870 to be exact — which included a wooden floor.

John’s family had deep roots in Macon County — he had two sisters, Annie, who lived in Haywood County until her death at the age of 101, and Jane Verinda. John’s father’s name was William (1757-1811) and he served in the Revolutionary War under General Green. He first settled in Kentucky, which is where John and his siblings were born. John’s mother, Sarah Smith, was 25 years younger than William (1782-1874) and helped to see the family’s move to Haywood County in 1815. Sarah outlived William by 53 years and even moved with John to Macon County, where she met and remarried James Kilpatrick.

John Corbin was a mountain of a man, with folk tales to boot. One such story recalls his physical prowess and strength being used to chop the top out of a towering chestnut tree that leaned dangerously toward the family’s home. After successfully overcoming the tree, folklore recalls John doing a handstand on top while nearby workers watched in awe. John was also known for frequently telling a tall tale of being able of walking the distance from Macon County to Asheville, beating the setting sun. The September 25, 1890, edition of the Asheville Citizen-Times featured an expert in “North Carolina Folks” mentioning John Corbin with the description, “Mr. John Corbin, of Mill Shoal, is 85 years old, has raised 14 children, had 74 grandchildren, 125 great-grandchildren, and 3 great-great-great grandchildren. He cultivated 8 acres of corn and 8 of oats this year, and a few days ago walked 17 miles in 5 hours.”

Whether John’s legacy is built in fact or fiction remains to be seen, however, his legacy is alive and well today, even beyond the family reunion which spans nine decades. The Corbin name is fixed to Corbin Creek and a mountain, the 4,400 Corbin Knob, which is located on the Macon-Jackson border, all thanks to John Corbin and his “bigger than life” persona. The Corbin legacy doesn’t stop with John Corbin — but instead, John and Nancy’s 14 children helped to build the family name into what it is today.

Although three of John and Nancy’s children died in infancy, and another at the tragic age of 14, the remaining 10 Corbin siblings brought 81 grandchildren into the mix, and from there, the Corbin Clan spread far and wide leading up to 1932 when the first Corbin Family Reunion was held in Macon County, inviting all relatives and John and Nancy Corbin to gather together.

As some of the first settlers of Macon County, the Corbin name is attached to countless historical 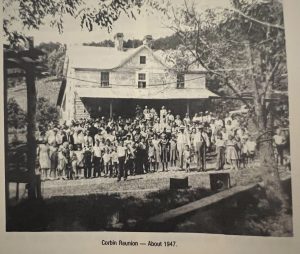 events that ultimately lead to the creation of the Macon County that we live in today. The land John Corbin obtained through a land grant from the United States Government remains in the Corbin Family today in Holly Springs and has been handed down from generation to generation. William, Mack, and Leander Corbin, all sons of John and Nancy, all fought for the Confederacy in the Civil War. Pinkney Phelix (P.P) Corbin and his wife Sarah Henry had seven children. Theodore served in the Spanish-American War in Cuba, where he died in 1898 from Typhoid fever. P.P. Corbin’s daughter Ida Belle had a son, Dewey, who served in WWII, where he was also killed. P.P. also had a daughter Nannie, who was born in 1896, and a son, William Jr., who served and died during WWII. P.P. Corbin’s son Henry Dixon Corbin Sr. had four sons, with Harold Pinkney Corbin being born in 1933. Harold, who served his country for four years in the US Air Force during the Korean War, had four children including Senator Kevin Corbin, whose son, Dr. Matt Corbin, currently serves as the President of the Corbin Family Reunion. Six generations of Corbins separate the Corbin family’s Reunion President and the founding Corbin who first moved to Macon County 185 years ago.

As rich in Macon County history as the Corbin Family reunion is, the records kept by the reunion, which has an official planning body, this year’s event headed by Matt Corbin serving as President, tell a story of historical significance as well. 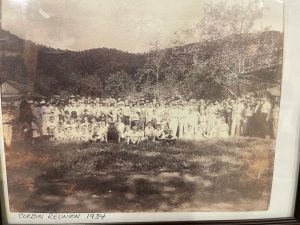 The Corbin Reunion was held annually at the “Old Corbin Home,” also known as the home of Dewey Corbin, until 1974, at which point the gathering had outgrown the property and needed tote moved to the Holly Springs Community Building. The reunion was not able to be held in 1941 due to an outbreak of Polio and it was also called off from 1942-46 because of World War II. The reunion was once again canceled in 2020 during the COVID19 outbreak, and until this year, was held in a reduced capacity to adhere to state event requirements during the pandemic.

The annual reunion is mostly devoted to singing, with nearly every newspaper announcement of the occasion mentioning the homemade food that would be served and the voices that would provide the entertainment. The first reunion of the Corbin family would have been attended by Henry Dixon Corbin, John Corbin’s grandson and the great grandfather of the 2022 reunion President, Matt Corbin. Harold Corbin, Matt’s grandfather, would have been right at one year old for the family’s first-ever reunion, and according to Matt Corbin, his grandpa told stories about he only ever missed the family reunion on four occasions, all of which were while he was serving in the war.

The farm the Corbin first settled on in 1837 and the area where many still reside today, was a completely self-supporting farm that raised almost everything the family consumed.

John and Nancy Corbin are both buried in the Holly Springs Cemetery, in fact, the majority of the Corbin Clan who have passed away are buried in Macon County.