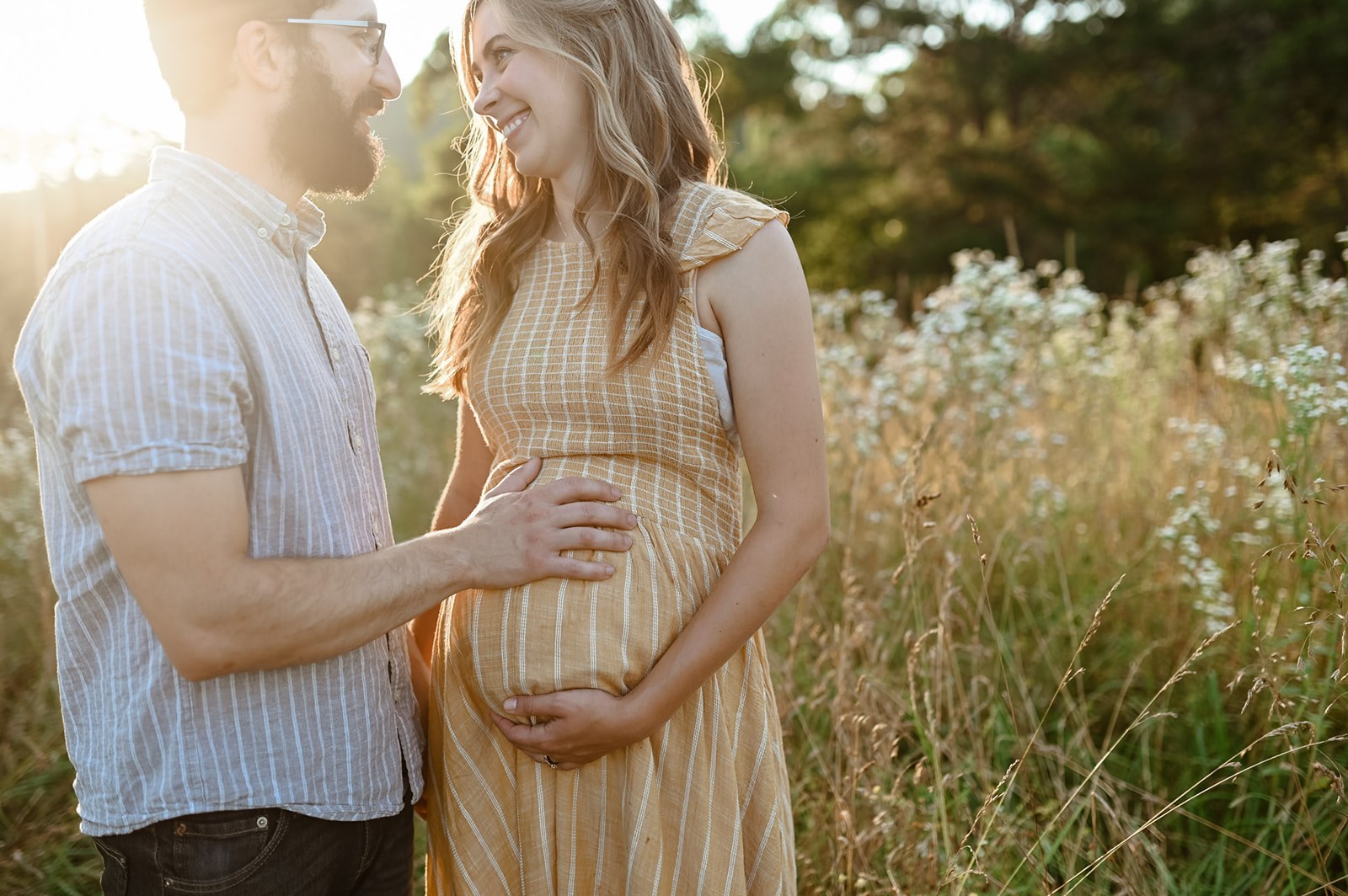 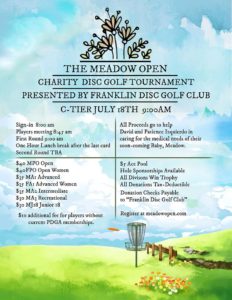 Local business owners have rallied behind David and Patience Izquierdo to host a Disc Golf Tournament to raise money for medical costs associated around their unborn daughter, Meadow.

The Meadow Open is scheduled for 9 a.m. this Saturday, beginning at the Macon County Recreation Park and will raise money for the family, who found out earlier this year, their unborn child was facing serious health issues. Local businesses have helped raise money by sponsoring holes and promoting the event.

“On December 1st after spending a long weekend with family for Thanksgiving, we found out we were pregnant,” said David Izquierdo. “Before we ever got married we talked about the future and having a house full of children. We were so excited that God had given us the gift of this baby and the future ahead of us as we began our family of three. On March 31st that excitement turned into fear as we went for a routine anatomy scan and found that our baby girl, Meadow Ruah, had multiple congenital anomalies.”

The couple were immediately sent to Asheville for further evaluation, and received a diagnosis they were not prepared for.

“After being sent to Asheville the same day to visit with a maternal-fetal medicine doctor, we found out that she has what is known as Dandy-Walker syndrome and an unknown heart condition,” said Izquierdo. “Dandy-Walker is a malformation in her brain that causes her Cerebellum, the part of the brain that coordinates movement, not to form. This brain abnormality often results in problems with movement, coordination, intellect, mood, and other neurological functions. In some children with Dandy-Walker fluid build up in the brain (hydrocephalus) is an issue but that has not been the case with Meadow so far. We are very thankful for that. Once she is born, if she does experience hydrocephalus, she will need to have a shunt placed in her brain cavity to allow for fluid drainage as this can be fatal if not treated. The doctors are also worried she has a heart condition involving her aorta (main artery that comes out of her heart). They know her aorta extends higher up into the neck but, due to her positioning and bones around the area, they have not been able to get a good image of it. Once she is born they will do an echocardiogram and a CT scan to get a definitive diagnosis and to decide if she needs heart surgery.”

According Izquierdo, it took a while for the news to set in. The couple had just adjusted to the thought of becoming a family of three, and now they were facing so many unknowns.

“Our first reaction to her diagnosis was initially just shock,” said Izquierdo. “We had never heard of Dandy-Walker Syndrome so at first, we weren’t sure exactly what that even would look like for her.”

Patience’s due date is August 9, but out of an abundance of caution, the couple will be induced on July 26, delivering in Charlotte.

“We will be delivering in Charlotte where our daughter will be admitted to the NICU to be observed and receive extensive testing and care to give her, her best chance at life,” said David.

While there are so many unknowns, David said that they are anticipating a lot of expenses being for the travel to the hospital in Charlotte, as well as the immediate medical bills for the special delivery.

“Our largest expenses initially will be the delivery and hospital stay for Meadow. Almost immediately after she’s born they will take her to perform an echocardiogram on her heart and then a CT Scan to determine the exact heart condition she may have and if she will in fact need surgery,” said David. “From there she will have an MRI for her brain condition to get a better view of the health of her brain that is present. She will also receive genetic testing, during this time, to find out the cause of her birth defects. In the Future, she will most likely need Therapy as well.”

The couple said that while there are a lot of unknowns and preparing to bring a medically fragile child into the world is difficult, they are trusting in God.

“Despite the unknown of the health of Meadow we have peace knowing that God is in control and that he has a plan for her life,” said David. “We have already witnessed God’s hand on her life this far, as she has pleasantly surprised the doctors with how well she has done so far and we have faith that that will continue on once she is here.”

The Meadow open will be held on an approved temporary course organized by the Franklin Disc Golf Club. The tournament will be sanctioned by the PDGA.

“Experiencing the support from our community has been such a blessing to Patience and I,” said David. “We have seen support from so many businesses around town sponsoring the tournament, as well as personal donations through a Facebook fundraiser that was started. We have gotten kind messages and messages of hope and encouragement. We felt alone going into this. We don’t feel that way anymore. Macon County should be proud.”

For more information about the tournament, visit Meadowopen.com.