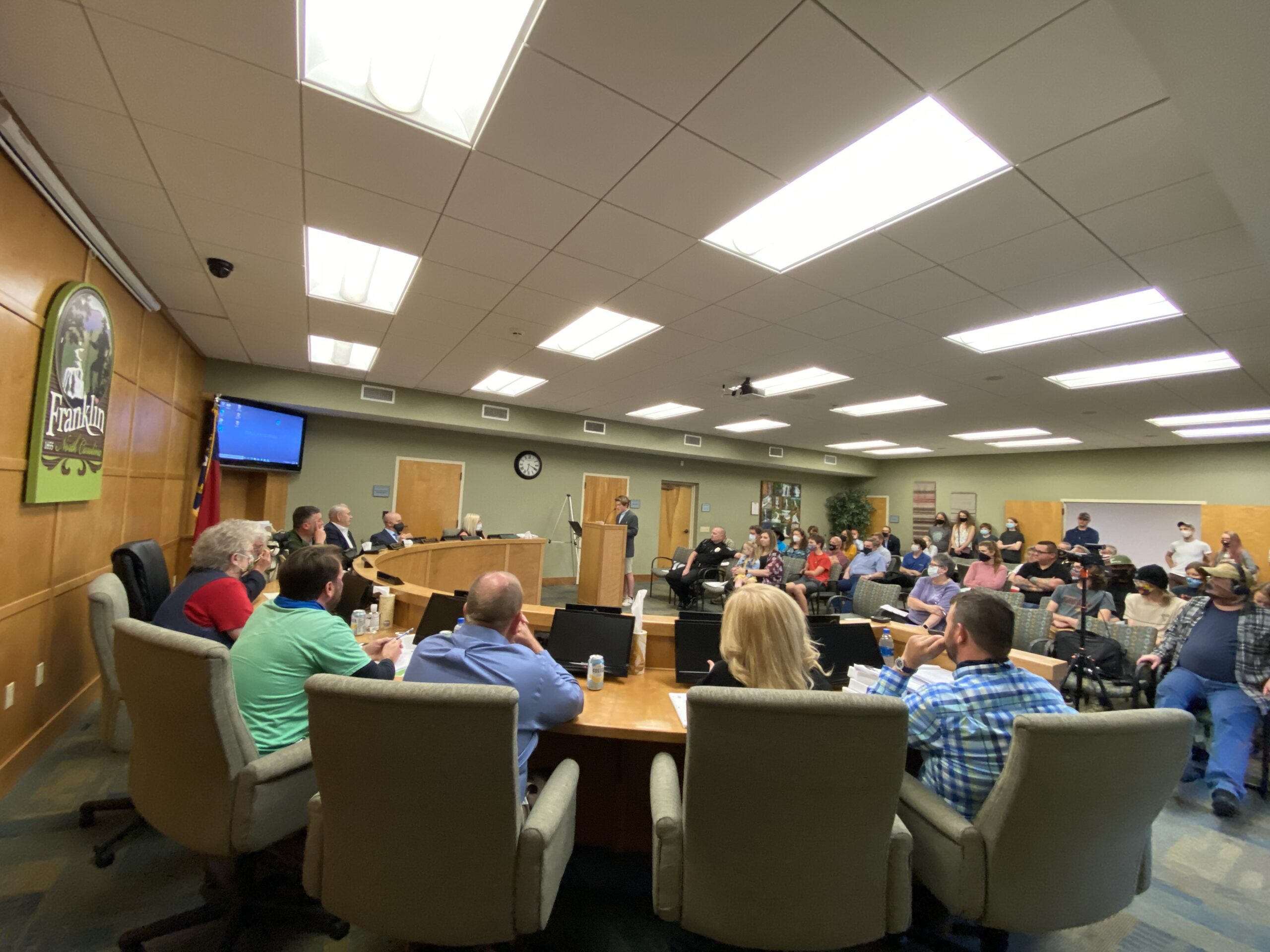 The board room in Franklin was standing room only Monday night as dozens of residents, young and old, gathered in support of a public skate park being constructed within the city limits.

Fourteen-year-old Evan Lampkin was the first to speak during the town’s public comment, “I skate with a group of 4 or 5 kids and finding somewhere good to skate where the police won’t tell us to stop, or where it’s not posted that there’s no skating allowed, is difficult,” said Lampkin. “We’ve been told multiple times it’s illegal to skate in town, but we haven’t found anything in the town or state ordinances that says that. There is no state ordinance prohibiting skateboarding on sidewalks, and when my mom called the town a few years ago, she was told that the town ordinances don’t address it at all.”

Lampkin went on to say that he and his friends utilize the skatepark located at Franklin United Methodist Church, but it is only open one day a week. Skateparks across Western North Carolina such as ones in Highlands or Cherokee double as economic incentives for the towns, but according to Evan, because he and his friends are not yet able to drive, they cannot just go to parks in nearby towns whenever they want.

“Highlands has a skatepark and Cherokee has a skatepark but my friends and I are not old enough to drive yet so I can’t go to those.  Plus, they’re at least 30 minutes away,” said Lampkin. “If we had a skatepark in Franklin, it would give kids someplace else to skate instead of on the sidewalks and streets. For me, skating is a big part of my life because it helped me make the friends I have today and it helps me take my mind off other things that may be bothering me. I had collarbone surgery in February of this year due to a snowboarding accident, so there was a long period where I couldn’t go skating, which means I didn’t get to see my friends and I had to get back into the rhythm, but as soon as I was allowed I went back out.”

The skate park in Highlands was built in 2017. According to Highlands Recreation Director Lester Norris, the cost was $220,000, which was donated by the community.

“The skate park is well used by locals and we have several groups that come from Franklin, Walhalla, SC, Cashiers and surrounding areas to skate the park,” said Norris. “It is very beneficial to the community because before we built the park kids were riding them on the sidewalks, in the street and any whereelse they could find to skate. So now they have a safe place to skate and just hang out with friends and is very popular.”

Other community members spoke to town officials in support of a skate park, even proposing possible locations such as at the Whitmire Property behind Poindexter tire or by the new dog park on frog town.

“If you would consider putting in a skatepark here in Franklin, my friends and I would be more than glad to sit down with you and talk about the features and options that could be included in the skatepark,” said Lampkin.

Franklin Mayor Bob Scott offered his support to those in attendance and with the board in agreement, Mayor Scott and Town Council member David Culpepper plan to meet with Lampkin and other residents to discuss the possibility of a skate park in the future. In the interim, Franklin Police Chief Bill Harrell said he will brainstorm options to provide a safe space for the public to skate that does not interfere with town sidewalks or pedestrian utilized areas.

“I served as the police chief in Highlands when they first opened their park and I don’t think there is another more used facility in all of Highlands,” said Franklin Chief Bill Harrell. “I hear what the folks here tonight are saying and I agree. I definitely support working toward getting a skate park here in Franklin.”