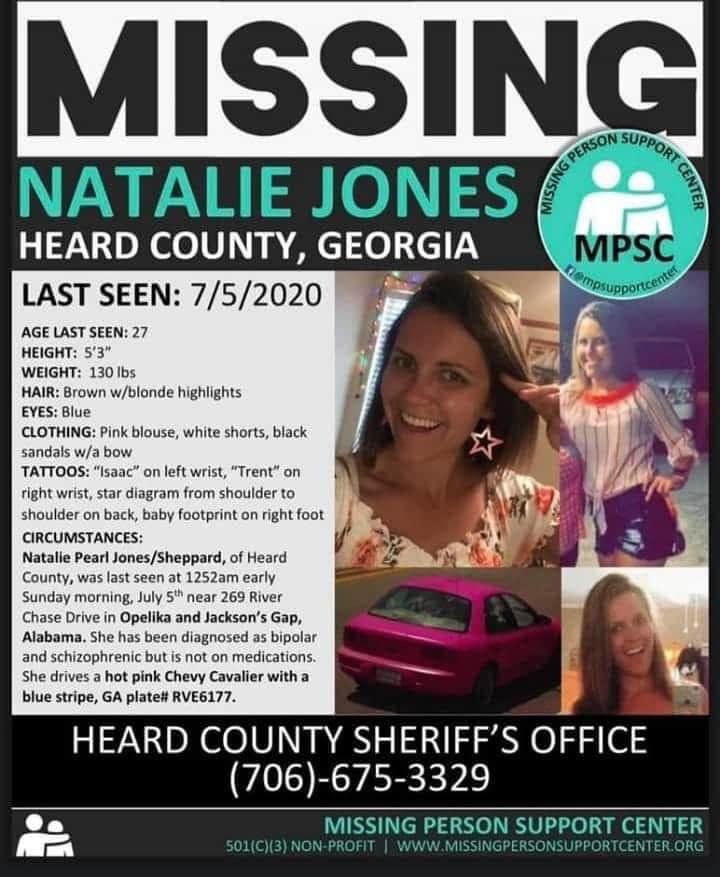 Authorities across the South are signing on to help the Georgia Bureau of Investigation locate a 27-year-old who has been missing since July 4 from just South of Atlanta.

Natalie Jones sent a text to her friend just before 1 a.m. saying “I made it. Thanks.” And that was the last anyone has heard of her since July 4.  Jones, a mother of two, had attended a Fourth of July Party and has not been seen or heard of since.

The Heard County Sheriff’s Office said Jones was last seen in Jackson’s Gap, Alabama and her cell phone was last pinged at a cell phone tower around 5:15 a.m. in Heard County, Georgia, the opposite end of the county from where she lives.

Jones’ hot pink Chevrolet Cavalier with the license plate number RVE6177 has also not been seen since the 4th.

Local and state law enforcement have organized search parties and conducted aerial searches, but have found no clues as to Jones’ whereabouts.

Jones is 5′3″ and about 130 pounds, with brown hair and blond highlights. She has multiple tattoos, including a tattoo on her left wrist that says Isaac and one on her right wrist that says Trent, the name of her two children.

At the time of her disappearance, she was wearing a pink-and-white striped top and white shorts, according to the Georgia Bureau of Investigation.

A Go Fund Me Page was established and has raised more than $3,000 toward a reward for information leading to locating Jones.