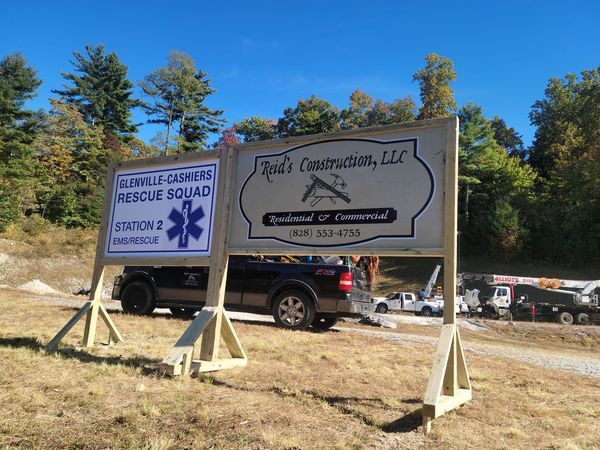 Recently, the Glenville-Cashiers Rescue Squad (GCRS) broke ground on a new facility that will provide a second base of operation for their ambulance and rescue services. The new station will help the rescue squad better serve the community and reduce response times.

GCRS’ second station will be located at 208 US 64 E in Cashiers. With the ever-increasing call volumes and the growing population along Highway 64 and 107 South, this second base of operations close to the Cashiers Crossroads will significantly reduce lifesaving emergency response times.

Last year, GCRS responded to approximately 1000 calls. Due to increasing call volumes, there is a great need for a second station in this area of Jackson County. With the traffic in this area of the county, especially in the summer, the second station will be located in a strategical location that will benefit the Cashiers coverage area.

“A second station would enable us to disperse our resources,” said Jim Huffman, GCRS Rescue Technician. “An EMS crew, equipment and rescue personnel could be located closer to where they are needed, and this would reduce response time. Dispersing our resources could mean in conditions such as ice, snow and accidents, when trees and storm damage block a road or make it impassible, we could still respond.”

“People walk into the current station seeking help,” he added. “The second station will be located in a more visible location and would provide a second location for those seeking help.”

The second station will be 9,300 square feet. The facility will have four apparatus bays, offices, a meeting room/command center, kitchen and sleeping quarters. An ambulance crew would be quartered at the station 24 hours a day seven days a week. The station would also house rescue apparatus and equipment.

The squad has several branches, an EMS service with 18 paid personnel, a Search and Rescue branch with one paid member and 30 volunteers, and a high angle team with 10 volunteers. When the new station is opened, GCRS doesn’t anticipate adding additional personnel. Instead, one of the current EMS crews would be relocated to the new building. An additional rescue/crash truck would be purchased and located at the new building.

Jackson County Commissioners Brian McMahan, Mark Jones, Gayle Woody, & Boyce Deitz joined the Glenville-Cashiers Rescue Squad and the project’s contractor for the groundbreaking ceremony in early October taking an important step toward completion of what has been a long awaited project.

The Jackson County Board of Commissioners approved a $4.6 million construction loan which will permit the Glenville-Cashiers Rescue Squad to move forward with the building this fall.

The squad purchased property in Cashiers in 2015 with the goal of building a second station. While the construction of the building is funded by the Jackson County, the rescue squad will rely on donations to fund the new rescue/crash truck to equip that truck and to furnish the building.

The station will be constructed by Reid’s Construction, LLC based in Lake Toxaway, N.C.

According to Huffman, if all goes well and there are no supply problems, the building process for the new station is expected to take approximately 14 months with an estimated completion date the first quarter of 2024.