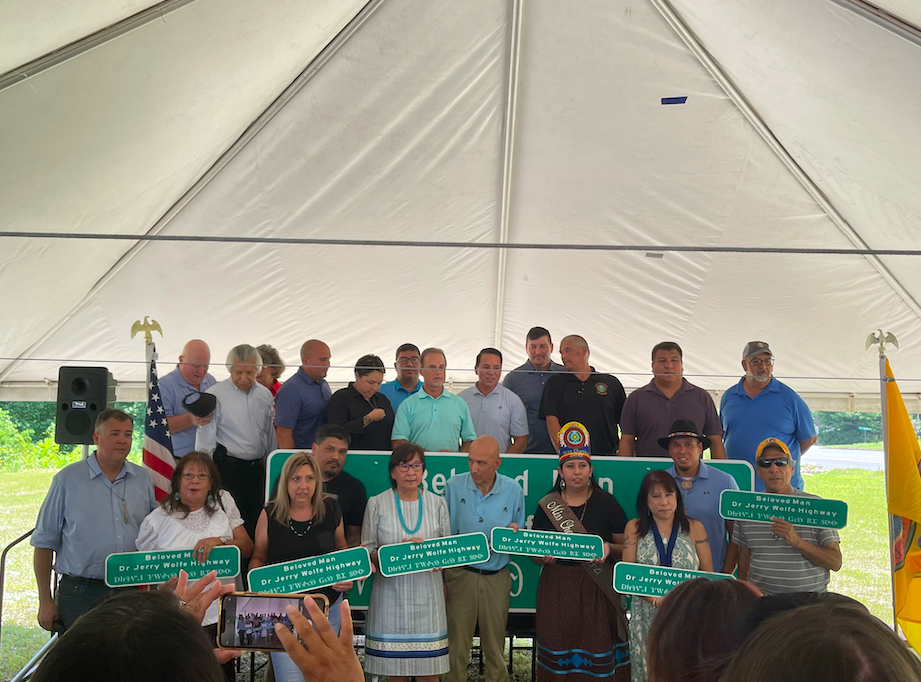 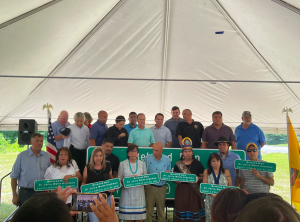 Wolfe was the first man in more than 200 years bestowed the honor of Beloved Man, a special designation for unique contributions to the Cherokee people.  Prior to him, the last recorded instance of a Beloved Man was Little Turkey who died in 1801.

Wolfe was honored for his vast contributions to the Eastern Band of the Cherokee nation, his service in the U.S. Navy, his dedication to heritage and history, and his vast amount of volunteer contributions to our world.

The N.C. Board of Transportation approved the designation in December 2020 in a resolution that states, “Dr. Wolfe served as a true testament of a Cherokee leader and should be recognized”. Reflective green-and-white signs stating “Beloved Man Dr Jerry Wolfe Highway” in English and Cherokee  serves as bookends to a 4.2-mile stretch of U.S. 441 through the Qualla Boundary between U.S. 74 and U.S. 19.

The Eastern Band of Cherokee Indians Tribal Council, Jackson County Board of Commissioners, 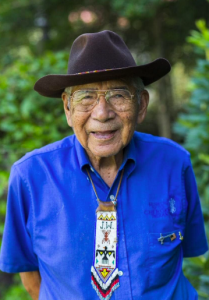 “If you’re ever lost in Great Smoky Mountains, don’t panic; the worst thing you can do is get excited, get upset.”

The voice coming from a recording continued during Tuesday’s ceremony to dedicate a western North Carolina highway in his honor. 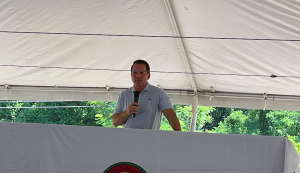 “It is very fitting and appropriate that Dr. Jerry Wolfe has a highway named after him,” said Chief Sneed. “Jerry personified what it means to be Cherokee. He lived out the 7 core values, Spirituality, Group Harmony, Strong Individual Character, Connection With the Land, Honoring Our Ancestors, Educating the Children, and Sense of Humor. He embodied these values and shared them with us. He was a man of honor and integrity and that is reflected in the character of his family. When I think about where we are today as a people I think it is imperative that we get back to the example Jerry set for us. Now everyone who travels this road will see his name and know that he was a man of honor, integrity, and character and that he was loved by all and truly was a Beloved Man.”

Born in 1924, Wolfe served in the Navy from 1943 to 1950 as a signalman second class and as the only Native American in his division. Following his military service, Wolfe returned to the Qualla Boundary to build his life with his wife, Juanita, and devoted his life to his family, his community and his culture.

He worked as a stonemason on the Qualla Boundary, became active in tribal veteran events, and served as an ambassador of Cherokee in all his travels. Wolfe volunteered at least several days per week at the Museum of the Cherokee Indians starting in 1987 until his death in 2018. 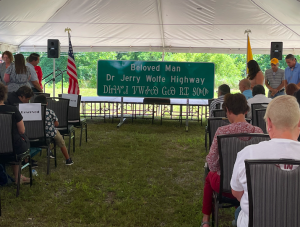 Wolfe.  But, once again, that would take a long, long time,” said Stephens, grandson of Dr. Wolfe. Stephens went on to speak of Wolfe’s talents as a storyteller and all-encompassing knowledge of Cherokee medicine.

Dr. Wolfe was honored numerous times over his lifetime including being awarded the highest honor in the state, The Order of the Long Leaf Pine.

“Thank you to all who spoke, shared, and sang,” said Chief Sneed. “And thank you especially to the family of Dr. Jerry Wolfe for sharing such a distinguished man with the community and for allowing us to honor you all and his memory at today’s ceremony.”

As Tuesday’s ceremony under a tent beside U.S. 441 drew to a close, Stephens shared one more lesson his grandfather taught.

“When you go into a community, the first impression is of a highway,” Stephens recalled Wolfe telling him. “And that highway will take you places. It can be rough, or it can be kind to you, so it’s befitting that a highway dedicated to our grandpa, our dad, our father, our uncle, our little brother.”