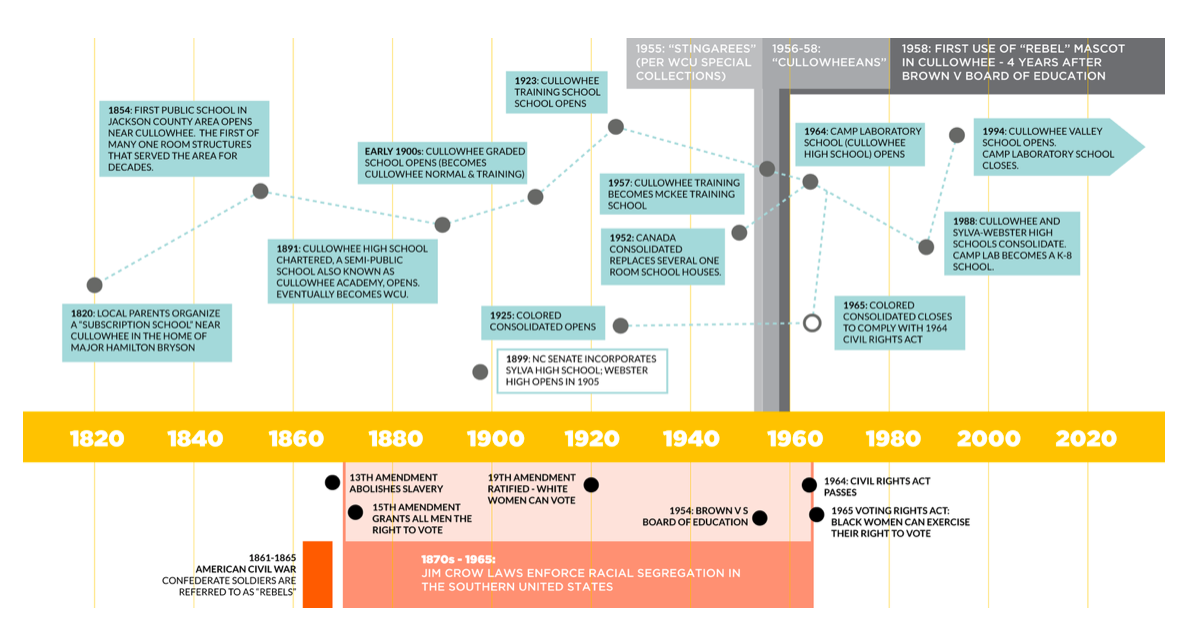 Nearly twenty years after Annie McCord Wilson first led the charge at Cullowhee Valley Elementary School to change the Rebel mascot as a student, she spoke to the Jackson County Board of Education Tuesday night, this time as a parent, with the same mission.

McCord Wilson, a Jackson County resident and former graduate of Cullowhee Valley Elementary school spoke to the board of education Tuesday night asking them to retire the Rebel mascot at Cullowhee Valley School and to empower students to select a new mascot.

Wilson told the board that schools and institutions around the country have retired similar mascots, as they are often connected to the Civil War. Citing Jackson County Board of Education’s goal of creating an inclusive environment for all students, McCord said that as the school symbol, the Rebel mascot does not demonstrate inclusivity as because of its history and meaning.

“The Rebel mascot divides,” she said. “An inclusive environment requires a new, non-controversial mascot that all CVS students can cheer for.”

This isn’t the first time McCord has asked district administration to consider changing the mascot. As an eighth grader at Cullowhee Valley in 2002 Wison first petitioned for the change nearly 20 years ago.

“I don’t like prejudice of any sort. If it can be interpreted that way, it should not be flaunted as the school mascot,” McCord, [Wilson] who was then a cheerleader and student council president said from the cafeteria of Cullowhee Valley School.

In 2002 when McCord [Wilson]first spoke out about the issue, the then Superintendent, Mack McCary dismissed the request and instead worried that she was causing problems.

The Smoky Mountain News reported on McCord’s 2002 request and stated, “Jackson County Schools Superintendent Mack McCary also fears that McCord might be stepping into an “adult issue” that could lead to unforeseen problems.

“While I am pleased at her intelligence to confront this issue, I don’t want to see adults hammering at her,” said McCary. “I’m not sure that her and her parents are prepared for this.”

McCord’s [Wilson]work as an eighth-grader came at a time when Cullowhee Valley School had been at their current location for just seven years. There was a push to change the mascot when the school first opened, however, it was unsuccessful.

In addition to starting a petition at her school, McCord wrote a letter to The Sylva Herald in 2002  explaining her position.

In her letter, McCord [Wilson] discussed the issue of heritage, the most common argument among those who try to keep Confederate images like the flag from being taken out of public places.

“People say (the mascot) represents our heritage, and we should honor and respect it …But there is much about our heritage I am not at all proud of,” the letter says, and then goes on to discuss slavery and segregation.

“It is time to shed this unfortunate image of the past and to select a new mascot with positive imagery and associations,” said McCord’s [Wilson] letter.

The Smoky Mountain News reported how McCord’s [Wilson] request as a student was dismissed further:

“Principals at Cullowhee Valley would not discuss McCord’s complaints, but McCary said he has not heard one word first-hand about the mascot since he came to Jackson County just over a year ago.

“I haven’t heard any complaints from adults,” McCary said. “I heard indirectly that some African-Americans do share (McCord’s) perspective.” reported the Smoky Mountain News.

Now, Wilson is THE adult and has joined other community leaders to change the mascot. According to Wilson, she along with other community members have been fundraising to cover the costs of changing the mascot and pledged to continue financial support to see it through.

The group established a website, RetiringtheRebel.com, that rallies support and explains the group’s mission.

“We’re a group of Cullowhee High School, Camp Laboratory, and Cullowhee Valley School alumni, parents, students, educators, and community members,” reads the website. “We have organized with a goal to retire the Rebel mascot from active use at Cullowhee Valley School, so that the CVS community can select and unite behind a new mascot that is welcoming, affirming, and representative of all.”

According to the group’s website, the history of Cullowhee public schools can be traced back to the mid-1800s. It wasn’t until 1958,  in the midst of the Civil Rights Movement and four years after the Supreme Court unanimously ruled that racial segregation of children in public schools was unconstitutional, that Cullowhee High School adopted the Rebel mascot.