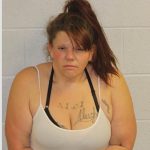 For the purpose of sentencing, Senior Resident Superior Court Judge Bradley B. Letts consolidated three judgments, ordering the 37-year-old woman to serve an active prison time of at least 16 months and up to 38 months.

On Jan. 28, an off-duty officer contacted Sylva Police Department to let officers know Devecki – wanted on outstanding warrants for her arrest – was at a Sylva grocery store.
When officers arrived, Devecki was leaving the parking lot in a car with three other women.

An officer’s dog trained to detect illegal drugs alerted on the vehicle. In the ensuing search, the officers found drug paraphernalia and narcotics. At Jackson County Detention Center, a detention officer discovered drugs in Devecki’s possession.
She was arrested similarly about four months later, on June 1. Cherokee Police Department officers discovered Devecki — again with outstanding warrants — in a grocery store parking lot, this time on foot. They found heroin and drug paraphernalia.
The previous year, on Aug. 16, 2020, and Oct. 8, 2020, Devecki had faced similar charges of possession of illegal drugs and drug paraphernalia, as well as possession of a controlled substance on jail premises.

Additionally, she was charged Aug. 7, 2020, with failure to return a GMC U-Haul truck to a wrecker service.