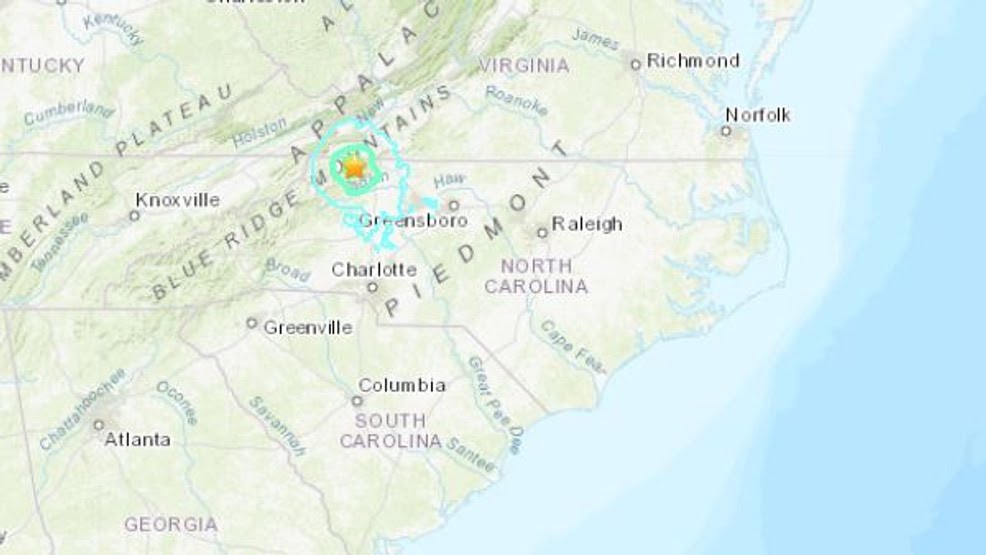 Largest earthquake in N.C. in over a century felt Sunday morning

The earthquake felt across the South was actually the second in the same area today. The first was a 2.6 magnitude quake that rattled Sparta, felt around 1:57 a.m. It was centered 2 miles from Sparta, officials said.

Residents from Macon County and all throughout North Carolina and South Carolina reported feeling remnants from the earthquake. From the hundreds of reports being made to the USGS, the quake was felt in all of North Carolina, much of South Carolina, Virginia, eastern Kentucky and Tennessee, southern West Virginia, northern Georgia. People reported feeling a light sake even as far as Maryland and Washington D.C., mainly from the upper floors of tall buildings (where the shaking motion is enhanced).

According to USGS, it is the strongest earthquake in North Carolina in 104 years.

The last earthquake that was in the North Carolina region above 5.0 was a 5.2 magnitude quake back in 1916. The quake being very shallow at 3.7 km depth, it was clearly and in parts strongly felt in an area of 15-20 miles around the epicenter but as light to moderate shaking in all of North Carolina as well areas of the surrounding states in the eastern US.

The agency issued a green alert, meaning there is a low likelihood of casualties and damage.

Some of the areas impacted include:

Damage occurred mainly in the closest town near the epicenter, Sparta. A power outage was reported that affected parts of the town. Broken glass, cracks in walls and ceilings, objects falling from shelves but also collapsed chimneys seem to be the main damages from the quake. No other damages or injuries have been reported at this time.

It is likely that the region will continue to feel aftershock from the 5.1 earthquake over the next few weeks. Aftershocks are earthquakes that follow the largest shock of an earthquake sequence. The difference between an aftershock and the initial earthquake is in the intensity of the quake. The initial quake always has the greatest power, or magnitude, as defined by the Richter scale. Aftershocks are smaller quakes that then occur in the general area after the main quake.