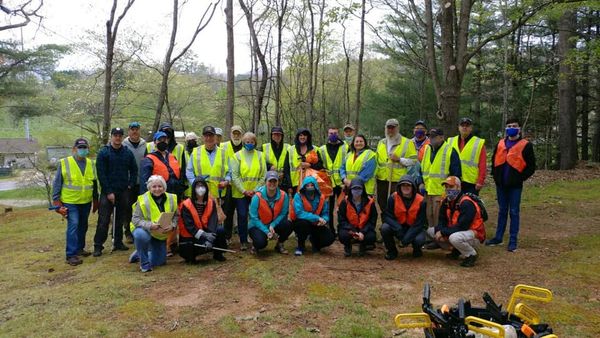 As part of its litter removal efforts, including the ongoing Litter Sweep, N.C. Department of Transportation crews, contractors and volunteers have now collected more than 4 million pounds of litter from roadsides this year.

“Only a week in, and already the Spring Litter Sweep has helped tremendously in keeping our roadways clean,” said state Transportation Secretary Eric Boyette. “Keeping North Carolina clean requires everyone to do their part, whether that’s volunteering in the ongoing Litter Sweep or simply securing your load when you drive.”

North Carolinians who wish to help keep roads clean can volunteer for the ongoing Spring Litter Sweep, which runs until April 24.

The Macon County Parents as Teachers program helped to teach the net generation of public servants the importance of a clean community after meeting on the Little Tennessee Greenway on Saturday morning. From there, the volunteers split into various groups and cleaned up litter all around Macon County.

The Plateau Pickup litter sweep, hosted annually by the Highlands Chamber of Commerce, targeted the trash along US 64 and volunteers reported dozens of bags of trash collected before noon on Saturday morning.

NCDOT’s litter management programs are multifaceted. The department makes use of state-owned forces and contract services statewide. NCDOT’s Sponsor-A-Highway Program​ allows businesses, organizations and individuals to sponsor litter removal along roadsides. NCDOT is also proud to partner with the more than 120,000 participants in the Adopt-A-Highway Program, where volunteers pledge to clean a section of our highways at least four times a year.

Litter is unsightly, costs millions of dollars to clean up and can hurt the environment, tourism and the state’s quality of life.

Everyone should do their part by:

Securing their loads before driving. Unsecured trash can fly from a vehicle and end up as roadside litter.

Holding onto trash until it can be disposed of properly. Keep a litter bag in your vehicle so you can properly dispose of trash later.