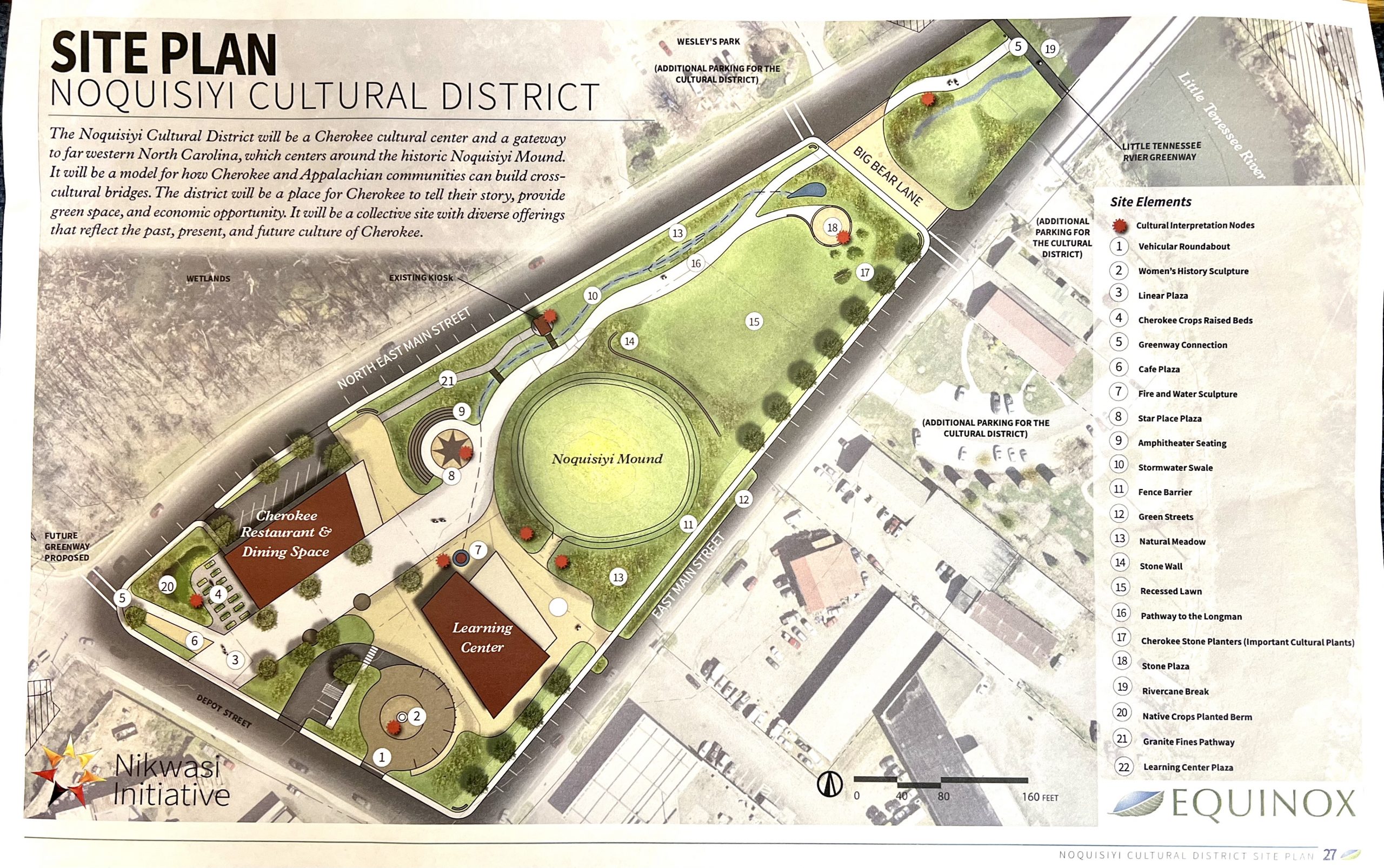 Macon commits $100,000 matching funds to Nikwasi Initiative contingent on support from other partners

The Nikwasi Initiative has an opportunity to apply for a $5 million grant, made available through the U.S. Economic Development Administration with American Rescue Funding by the Federal Government. The grant requires a 20 percent match — which equates to $1 million.

The $5 million grant would be used to develop the area around the Nikwasi Mound to preserve the mound’s history while developing the green space to serve as an economic corridor for the Cherokee Indian Reservation.

Tuesday night, the Macon County Board of Commissioners voted 3-2 to pledge $100,000 toward the needed $1 million contingent on verification that Mainspring Conservation Trust, the Eastern Band of Cherokee Indians, and the Town of Franklin are all also supportive of the project and that they will help meet the $1 million match requirement. Nikwasi Initiative Director Elaine Eisenbaum and Co-Chair Juanita Wilson presented the request to commissioners.

The Nikwasi Initiative was founded to promote, interpret and link cultural and historic sites (such as the Noquisiyi and Cowee mounds) along a Cherokee Cultural Corridor, along with raising awareness and funds to pursue those efforts and exploring more opportunities for collaboration between the Eastern Band of Cherokee Indians and local communities.

Its story began on April 17, 2015, when a group of people from the Franklin and Cherokee communities met for the first time with the common goal of conserving heritage and healing relationships between mountain neighbors. Leaders from these two communities began a collaborative dialogue to explore strategies for regional partnership, cultural preservation, and economic development.

This group known collectively as Mountain Partners, ultimately founded the nonprofit Nikwasi Initiative in 2016 to act on the shared ideas and goals conceived during these collaborative sessions. Formed with support from the Community Foundation of Western North Carolina, the Cherokee Preservation Foundation and the Z. Smith Reynolds Foundation, the larger Mountain Partners group includes members of the EBCI, Franklin Town Council and Macon County officials, members of Mainspring Conservation Trust, and members of the Cowee School Arts and Heritage Center.

Part of Nikwasi Initiative’s mission is to develop a Cultural Corridor along more than 60 miles of the Little Tennessee River, from Cherokee to Franklin and the headwaters of the river, creating cultural interpretation resources on-site to promote improved visibility of significant Cherokee landmarks and historic sites. The first phase of this important project has been completed and includes cultural kiosks with informational panels at the ancient towns of Cowee, and Noquisiyi overlooking the Mounds that were the gathering place of each. The $5 million matching grant will jumpstart the remainder of the project and allow the Nikwasi Initiative to begin development of the corridor.

The funding would be used to consolidate more properties into the triangle surrounding the mound and to remodel the former Dan’s Auto Service building, which the tribe purchased in 2017 as part of the eventual development of the area.

The motion was made by Commissioner Ronnie Beale and seconded by Gary Shields. Chairman Jim Tate also voted in favor. The funding is also contingent on the Nikwasi Initiative being approved for the grant funding — if they are not approved, the funding will remain within Macon County’s budget.

Commissioner Paul Higdon stated that too supported the project, but remains hesitant about supplying taxpayer funding to non-profits. Higdon stated that he would be more likely to approve the request if the funding could be included as part of the county’s budgeting process rather than an unexpected expenditure. Despite the motion approved being a pledge, with the full funding of $100,000 not being needed immediately which would likely mean it would become part of the budget discussion, Commissioner Higdon voted against the measure.