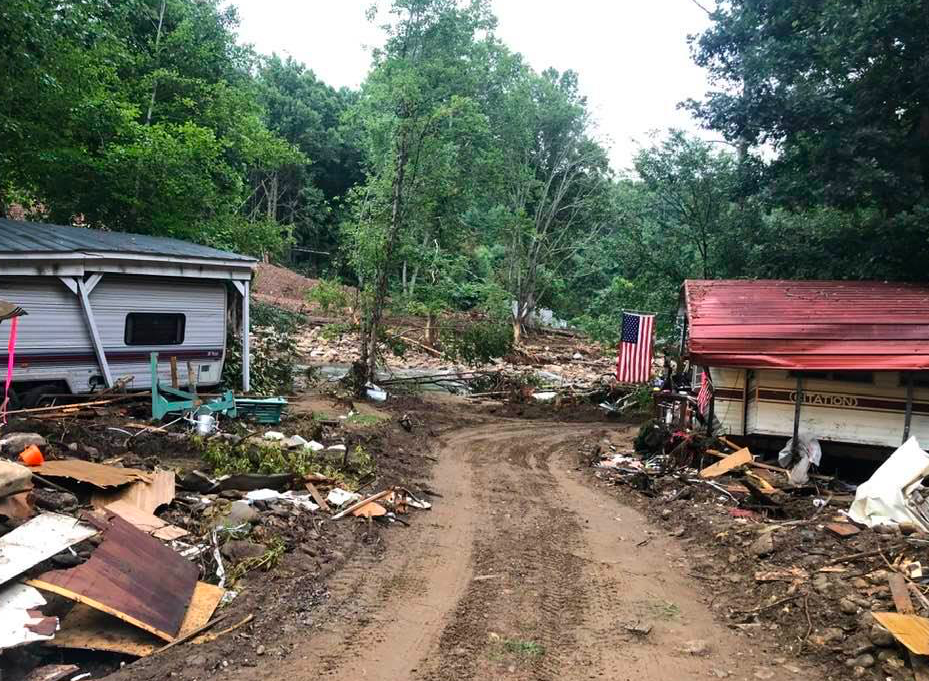 Just a short drive from Franklin, folks in Haywood County are continuing to pick up the pieces after a devastating flood ripped through the town last week as a result of Tropical Storm Fred. The flooding stemmed from heavy rain — parts of western North Carolina received more than 10 inches from Sunday through Wednesday, the National Weather Service said.

Rain exceeded 5 inches from Monday evening to Tuesday evening alone in the Haywood County community of Canton, the weather service said, swelling the Pigeon River to more than 9 feet above flood stage and the highest level since 2004.

The death toll rose to 5 on Sunday afternoon when the fifth victim, Frank Lauer, Sr., 74, of Cruso was identified. The other people confirmed dead as a result of the storm are Frank Mungo, 86, Franklin McKenzie, 68, Judy Mason, 73, Charlene Mungo, 83, all of Cruso.

Flooding and washouts have done “significant damage” to county roads — especially around the community of Cruso — with 10 to 15 bridges damaged or destroyed, the county emergency services department said.

From the moment that news broke of the damage to Haywood County, communities across Western North Carolina stepped up to help. First responders from neighboring agencies traveled to Haywood County to assist in search and rescue missions, local churches and fire departments collected needed supplies, and agencies set up makeshift shelters at local high schools.

A group of Macon County residents led by Kevin McCall, Mike Gibson, Benjamin Vanhook, Ben Koszczepki, and Josh Drake organized a donation drive that promised to match monetary donations after reaching a $5,000 goal. By Tuesday morning, the group was just shy of their $50,000 goal to be donated to families in need in Haywood County.

“We have received over $10,000 from folks in Macon County — we even had a young boy stop to give us $2 and some change that he had been saving up,” said Vanhook. “Then the VanDrake investment team started reaching out to our competitors around the region challenging them to match donations and those guys stepped up.”

Vanhook said their competitors from Boone to Tennessee matched the locally donated funds and by Tuesday afternoon, their efforts totaled $46,500.

“We really want to surpass $50,000 to help these families begin to rebuild,” said Vanhook.

“We want to help families get school supplies and school clothes. We know they lost everything so we want this money to be used to help those children and families,” said Vanhook.

Canton Mayor Zeb Smathers said that while supplies are still desperately needed and appreciated, he wanted the public to know that Haywood County is still open for business.

“Many people continue to ask me what can they do to help. Obviously, the donation of supplies and resources needs to continue especially in the Cruso, Bethel, and Old Asheville Highway areas. However, I have an additional request…shop local,” said Smathers. “Canton is not closed. Yes, our river district businesses have tremendous damage, but the majority of other businesses are open and would love to see you. Also, the ones open are finding ways to support the businesses, homes, and neighbors who have lost so much. Be mindful and patient that some roads and resources are restricted in Papertown, but for the most part, we are ready to see and serve you! Thank you again for your prayers, cooperation, and support!”

Congressional leaders Rep. Madison Cawthorn and Sen. Thom Tillis toured the devastation as did Governor Roy Cooper — all eager to complete a damage assessment in hopes of gaining assistance from FEMA. Senator Kevin Corbin and Rep. Karl Gillespie put out a call for help for surrounding counties for supplies — and the Macon County Community spring into action. The Franklin Police Department and Franklin Fire Department houses a truck beginning the day after the flood for needed supplies such as cleaning materials and water. A group of Macon County farmers even reached into their own supplies to collect desperately needed hay for livestock in Haywood County.

If you would like to help, donations can be made at Patrick Jenkins Farm Bureau Office on the Highlands Road, or online at the GoFundMe page organized by Vanhook.