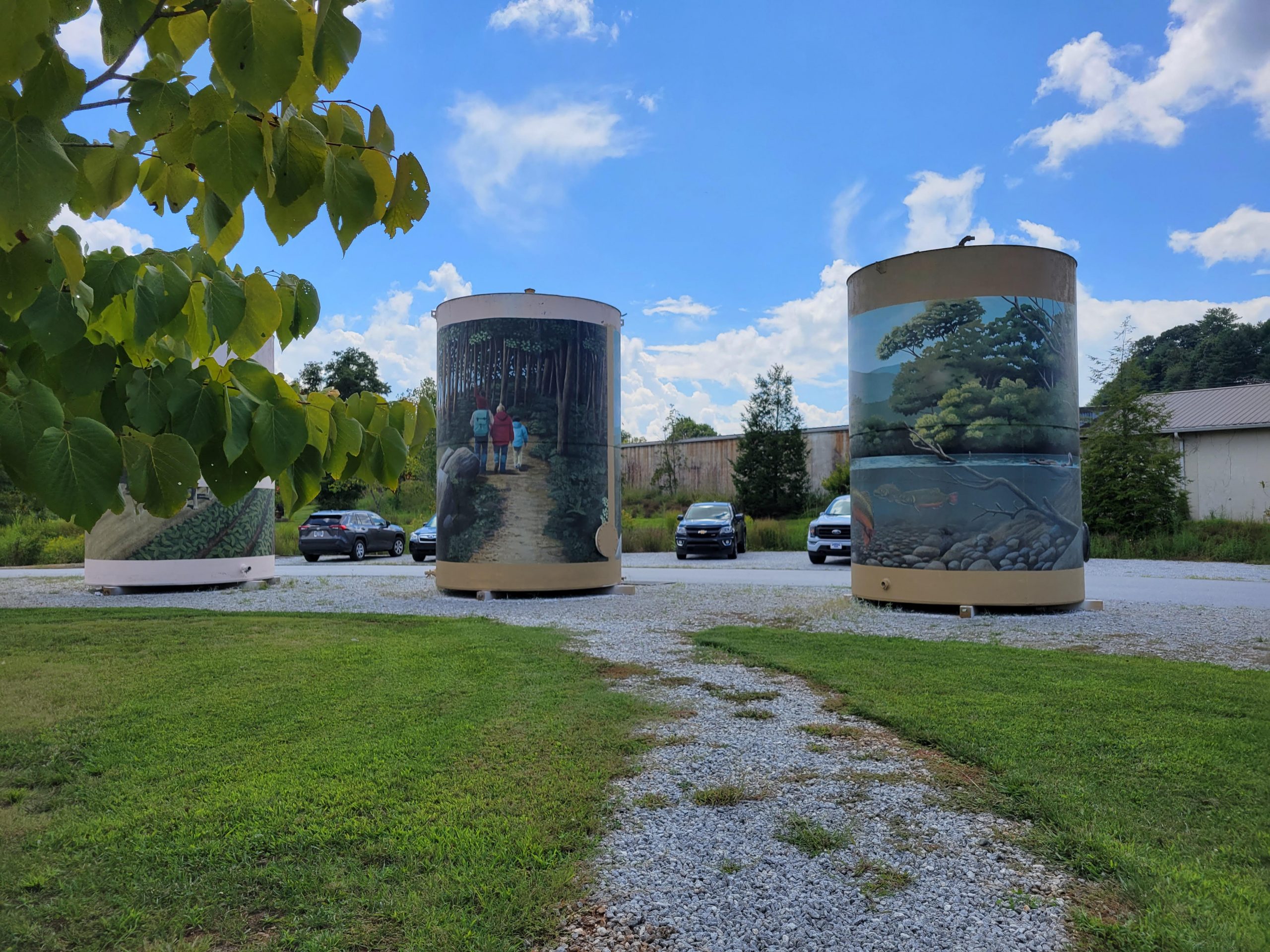 Since it located its office at 557 Main Street, the Mainspring Conservation Trust has continued to make improvements to the grounds and adjacent property surrounding its office. Their efforts have turned what was once an eyesore at the entrance to downtown Franklin into an attractive green space adjacent to the Little Tennessee River.

In 2014, Mainspring purchased the property adjacent to its main office on East Main Street. The 1.52 acres, which includes 350 feet of frontage along the Little Tennessee River, was once home to Duncan Oil. The property was contaminated due to over 40 years of storing and distributing petroleum.

Over the next few years, Mainspring made significant improvements to the property. The remediation process included the excavation and removal of more than 3,200 tons of contaminated soil under and around 32 storage tanks along with the excavation and grading of a riverside path on the west side of the Little Tennessee River.

The extra space to the left of Mainspring’s office has made more room for a gravel parking lot, and grading work was completed behind the office to make the river more visible from the picnic tables and small walking trail located on the property.

Other improvements to the property included the installation of a stormwater system. In addition, about 50 native trees were planted on the restored property, and landscaping was completed to create the green space by the river. In 2017, the Board of Directors announced the area as the “Paul Carlson Woodland” in honor of Mainspring’s Founding Director. 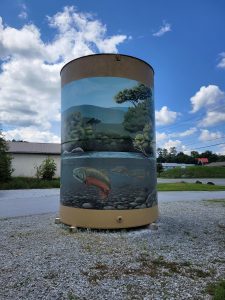 Mainspring’s newest improvement to the property is the transformation of the four oil tanks leftover from the brownfield remediation project. The non-profit organization has been working with artist Scott Allred of Asheville’s Brushcan Custom Murals to create murals on the 12,000-gallon, 14’ tall tanks. After completion of the remediation project in 2014, Mainspring decided to leave the tanks in place as a nod to the river district’s past as an oil and gas area.

“We started working with Allred more than a year and a half ago, knowing that we wanted to tell the Mainspring story visually,” said Molly Phillips, Mainspring Communication Director.  “Our mission is conserving the waters, forests, farms, and cultural heritage of the Little Tennessee and Hiwassee River Valleys, so with four tanks, those four areas fit perfectly to depict our main areas of focus. Scott’s vision for the Mainspring murals came to life over the course of conservations in that year and a half.”

“We’ve always considered this river district the gateway to downtown – we hope these murals help improve the aesthetics for visitors and residents alike, while reminding people what Mainspring is working to conserve,” added Phillips.

Originally, the plan was to paint the murals directly onto the huge tanks, but the timing dictated another solution. Instead, a technique called Polytab was used, where the murals were hand-painted over the winter off-site, on non-woven fabric specifically designed to adhere to the old paint. Once complete, each mural was carefully cut into 4′ x 4′ squares and stored in rolls.

After a fresh coat of industrial-strength primer paint, Scott brought the squares to the site to begin the painstaking process of adhering each panel to the tank surface with a thick acrylic paste. The acrylic paste bonds to the tank surface and essentially “sucks” the mural to the tank surface as the paste dries and bonds. The result is a thick surface covering that still shows every bump, seam, and imperfection in the original surface, just as it would have been if the murals were directly painted on the tanks as originally envisioned.

The final result is a striking mural on a unique “canvas”, but with more durability and protection

than a traditionally-painted mural would provide to these old, empty, fuel storage tanks that graced this property since the mid-1940s.

Once completed, the tanks will be placed around Mainspring’s campus and plans are to create a walking path so people can get a closer view of the public art. The walking trail and explanation signs will be completed as Mainspring’s budget allows or as donations are received for the project.

The current improvements to the property Mainspring were made possible with funding from a grant through the Canon Foundation to help with some of the hardscapes in the project. In addition, Richard Clark of Clark and Company has donated many hours helping Mainspring plan a vision for the area including the details of using native plants and trees on the property. Young Tree Service donated their time to move the tanks into a position to make it easier for the artist to apply the murals. All of the funding for the actual murals is from donors to Mainspring for the art project.

Mainspring’s vision for the property is that it will be used as an outdoor learning and gathering space including the construction of an educational pavilion. Future plans include educational programming on the site for youth and adults to learn about the rich cultural and biological resources in the area and how they can make a difference by taking care of those treasures. Other future plans for the property include featuring river access to the Little Tennessee River.

Mainspring is the land trust for the region which spans seven counties: Cherokee, Clay, Graham, Jackson, Macon, and Swain in North Carolina, and Rabun County, Georgia. Their goal is to conserve and restore the lands and waters of the Southern Blue Ridge, and to connect the people to these natural treasures.

**If you find value in the work of The Southern Scoop News and want to see it continue, please consider a small donation to our online Patreon account. As of today, 21 individuals contribute monthly for a total of $127 which helps to ensure we continue providing you with these types of updates. The Southern Scoop News is unable to operate without your support. To donate, click here.

Published in Community and Outdoors