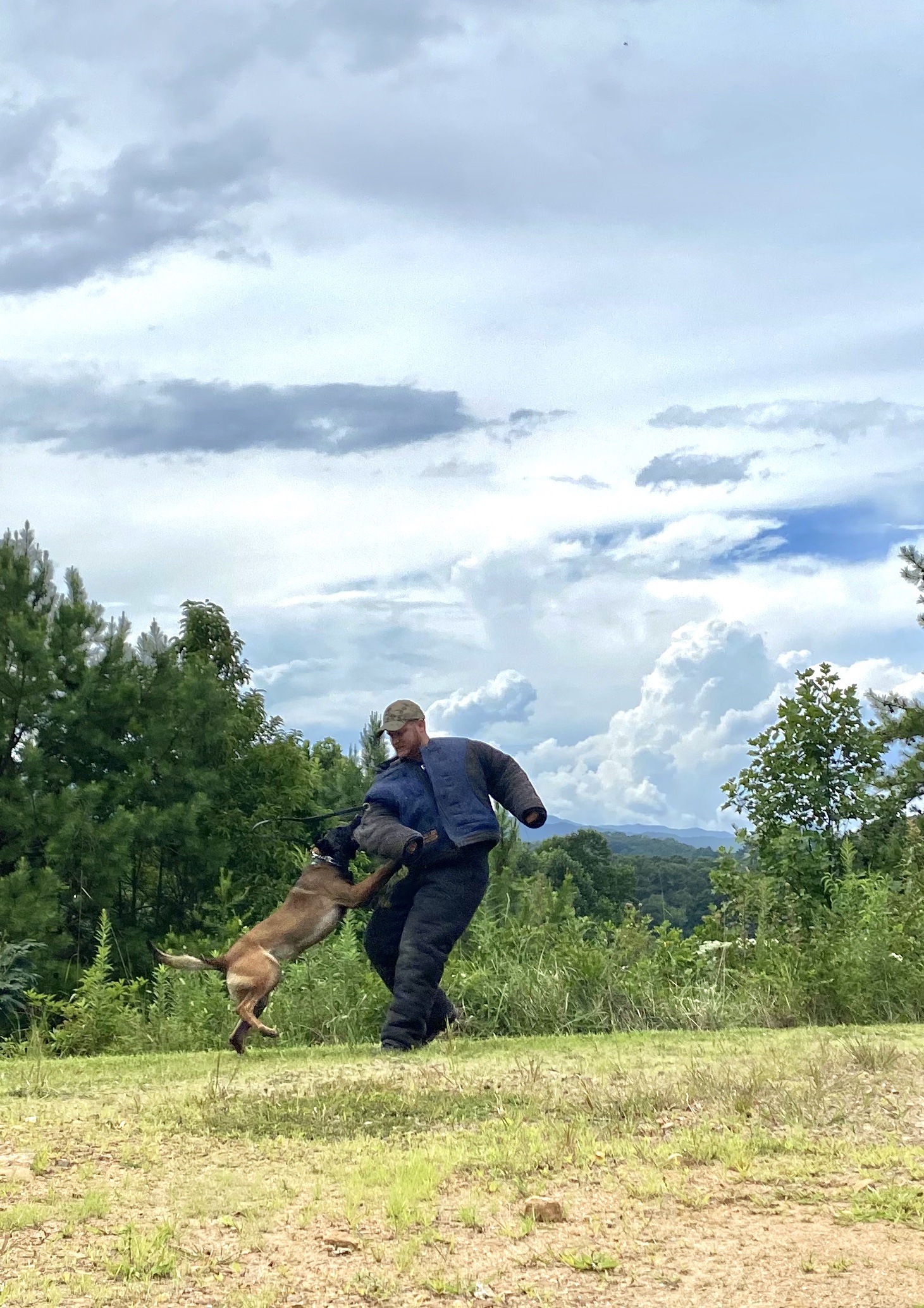 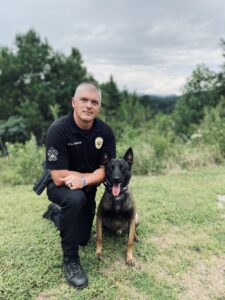 Earlier this month the Macon County Sheriff’s Office was dispatched to a rolling domestic in the Burningtown Area. A rolling domestic means a domestic violence situation in a vehicle. After law enforcement arrived and separated the parties involved, they learned that a loaded firearm was tossed from the vehicle along the roadside during the confrontation. Deputies on scene called in First Sergeant Clay Bryson and his new K9 partner Rocky to locate the firearm.

“I was off duty for the day, however they needed and article recovery so K9 Rocky and I went to Burningtown to assist in the search,” said First Sgt. Bryson. “Rocky was able to recover the firearm, which was found to be loaded, in a large thicket with laurel bushes, briars, and downed trees on the roadside. Because of how thick the vegetation was in the area, it is unlikely we would have been able to locate the firearm without K9 Rocky, but fortunately we were able to recover it and prevent a child or someone else encountering it later.”

K9 Rocky is the latest addition to the Macon County Sheriff’s Office K9 Unit and has been certified with the department since June of this year.

“K9 Rocky is the newest member of our K9 Unit and has already been credited with successful searches and arrests,” said Macon County Sheriff Robert Holland. “We had been searching to replace K9 Hoss due to his medical issues related to injuries he had sustained at work in the last couple of years. His mobility has significantly deteriorated and now that K9 Rocky is available for active duty we thought retirement was in his best interest.” 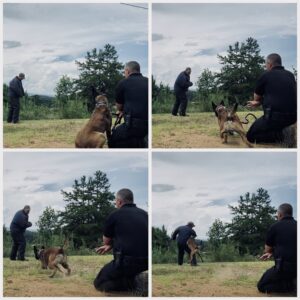 As part of that training, First Sgt. Bryson worked with Rocky and 29 other canines. Sgt. Bryson selected Rocky out of the group to join the Macon County Sheriff’s Office K9 Unit. First Sgt. Bryson and Rocky then completed a 300 hour training course together. Rocky is a 2-year-old Belgian Malinois, the same bread as the other canines working with the Sheriff’s Department. Rocky works as a full patrol dog, meaning he is used for narcotic detection and utility work such as article recovery, and suspect apprehension.

“I actually have Rocky’s passport,” Sgt. Bryson said. “He came straight from Belgium, Germany to Pennsylvania.”

The 12 week course Sgt. Bryson complete came at a cost of around $18,000, which included the purchase of Rocky. The course was funded through annual fundraisers hosted by Mill Creek Country Club as well as a private donor who paid for half of the course. Neither the canine or the course was funded out of the sheriff’s department budget and according to Sheriff Holland, because Rocky will replace the now retired K9 Hoss, the department will still have the same number of working canines so there will be no additional cost to the county. The certification Sgt. Bryson received as part of the course will not only benefit Macon County, but will also assist other agencies in WNC such as Highlands PD who train alongside Macon County weekly.

“Sgt. Bryson is now a certified trainer which gives him additional knowledge in Police K9 training that he can share with his fellow K9 handlers as well as other officers,” said Sheriff Holland. “This additional knowledge gives him a wealth of knowledge as well as other professional contacts. It’s not uncommon to hear him discussing different ways of training and problem solving he has trained through the years. Not all dogs are the same so what works for one may not work for another.”

Sheriff Holland said that Sgt. Bryson certification will be beneficial for the future of the department’s K9 unit as it adapts to the changing need.

“We have goals for our K-9 unit in the future and we are always looking for ways to improve the services they provide,” said Sheriff Holland. “We are always looking for how we can improve the way we do things and how to get the most out of what each team can provide to the citizens of Macon County. Ideally, I’d like the K9 unit in the future to be able to work more with all the various units of the agency without their primary duty being responsible for working patrol shifts where they are responding to calls that have nothing to do with K9’s. As we grow, we must branch out and try new things. We may not always be successful after making those changes but we’ll never know if we don’t try.”

The Macon County Sheriff’s Office currently employs four canines. In addition to Rocky, the department has K9 Chase who is also a full patrol dog, and K9s Diesel and Tye, who are both certified in narcotic detection.

The K9 unit averages one deployment per shift and from July 1 to August 20 had 87 deployments which resulted in 31 arrests and 69 items seized. During that time, the MCSO’s K9 Unit recovered 175.4 grams of methamphetamine, 18 grams of marijuana, 13.7 grams of heroin, 1 gram of cocaine, and ecstasy.

On August 4th, Deputy David Blanton and his K9 Chase were called to assist Franklin Fire and Macon County Emergency Services in locating a 79 year old woman with dementia. The woman had wandered away from the Franklin House after dark. The Sheriff’s Office responded and Blanton deployed with K9 Chase and were able to pick up on the women’s scent two and a half hours after the woman was last seen. The woman was located safely and after being checked out by medical personnel, was returned safely to the Franklin House just before midnight.

Earlier this month Sgt. Nick Lofthouse and his K9 Diesel were called to assist in executing a search warrant on a local hotel. A shooting that occurred in the South Franklin area led investigators to the hotel in the early morning hours with a search warrant due to evidence of illegal activity. K9 Diesel was deployed to search the building and alerted Sgt. Lofthouse to a bag which was found to contain what is believed to be methamphetamine and heroin. In the last month, K9 Diesel was used to search numerous vehicles which resulted in arrests and charges including possession of firearm by felon and trafficking methamphetamine and heroin.

I am proud of our K9 Unit and the important role that they play in fighting crime and drugs in our county,” said Sheriff Holland. “They all are dedicated to this community and want nothing more than to help ensure our community is a better place to live and raise a family. I’m honored to have each of them working for the MCSO. They are an absolute asset to our organization.”