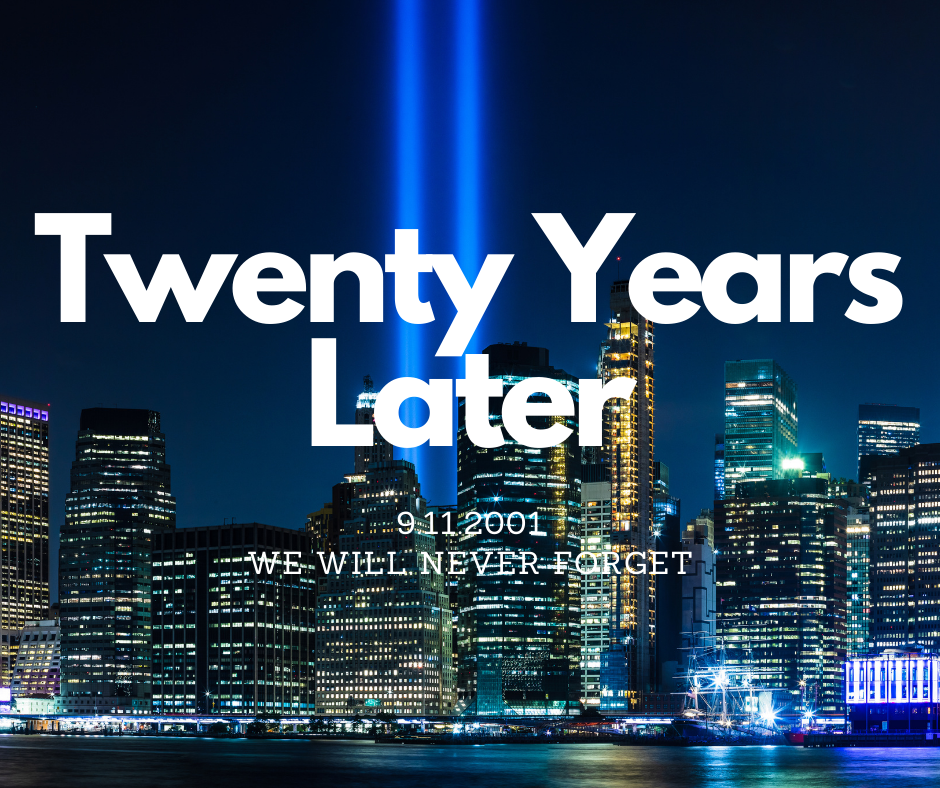 By Brittney Lofthouse on September 9, 2021

I was in the eighth grade. I was sitting in Mrs. Robinson’s eight grade class watching Channel One news. A hysterical teacher threw the classroom door open and screamed Shannon Murphy’s name. Her grandfather had built his career working in the towers. We were told it was a terrorist attack on the World Trade Center. At the time, I had never even heard the word terrorist. I had no concept of what it was. Parents grabbed their children from school, my mother included. While my mother was in tears clinging to me and my sisters, all I could do was complain about missing that day’s volleyball game. She took us to church where we prayed and hugged our neighbors. I had no idea why.

Now 20 years later, I remember the events of that day like it was yesterday even though I was only 13 years old. We all do. I remember watching as the second plane crashed into the towers. I may not have understood the magnitude of that day then, but I remember.

The Macon County community will be recognizing the 20-year anniversary of the 9/11 attacks throughout the weekend. Saturday morning, a program will be held ahead of the “Never Forget” 5K Walk/Run at the Franklin High School Football Field beginning at 9:55 a.m on Saturday, September 11.

Macon County Commissioner and Veteran Gary Shields will provide the welcome, followed by comments from Franklin Mayor Bob Scott and Macon County Board of Commissioner Vice-Chairman Ronnie Beale. The Posting of the Colors will be completed by Vietnam Veterans Ronnie Norton and Rick Norton.

The 9/11 program will feature music and a special presentation to remember those who lost their lives during the terrorist attacks on September 11, 2001. The Franklin Police Department will continue the days’ events with a Public Safety Day at Franklin High School following the 9/11 remembrance ceremony and will go until 1 p.m.

While remembering the 9/11 attacks 20 years later, remember the numbers associated in the day that forever changed the trajectory of our lives.

Number of firefighters and paramedics killed: 343

Number of families who received no remains: 1,717

Number of people who lost a spouse or partner in the attacks: 1,609

Estimated number of children who lost a parent: 3,051

Days fires continued to burn after the attack: 99

Estimated number of New Yorkers suffering from post-traumatic-stress disorder as a result of 9/11: 422,000

On September 11, 2001, all of our lives were forever changed. May we never forget those who lost their lives that day and in the days since defending this country. May we never stop telling the stories of the brave men and women who ran into the crumbling building in hopes of saving lives, even if it meant losing their own. May we never forget the fear our friends and family, like Shannon, felt not knowing the fate of their loved ones who were in the city that day. And may we always, always thank God for the breaths that were spared and for the sense of unity that was gained when so many other things were lost. May we never forget.