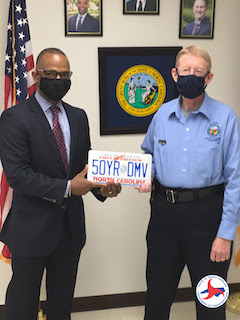 BRYSON  CITY – Western North Carolina teenagers in 1970 had to visit with Johnny Southard before they could legally get behind the wheel of their Dodge Challenger, Ford Mustang or Chevy Cheyenne.

They had to pass his test — the Department of Motor Vehicle driving test.

Fifty years later, some cars are electric, parts of the test are electronic, and the teenagers themselves are more eclectic.

But the 16-year-olds of today still have to see Southard and pass the test. Southard has now spent five decades working as a license examiner — most of the time as the only examiner — in offices across western North Carolina including Andrews, Franklin and Bryson City.

“He has been a staple of the community for 50 years and he is intertwined with the people who live in Swain County,” said Southard’s boss, District 7 Manager Renee Link. “He’s a servant to the state and the community. I can’t imagine the number of people he’s waited on and served. Kids and their kids — three generations of one family.”

Top North Carolina DMV officials traveled from Raleigh to Bryson City today to surprise Southard at his office and honor him for 50 years of service and dedication to the department.

“I like my job, and time has went by so fast and sometimes I get to thinking about retirement and that I’ll do it in a few months, but then a year goes by then another year,” Southard said. “I just like the job. I makes you feel good. That’s a good part of the job — being able to help people.”

“He is an example of commitment and loyalty to an organization and has been an integral part of this community,” Jessup said. A driver license provides people access to health care, education, a job and gets people to where they need to be to improve their quality of life. Imagine how much he’s improved the quality of life in this community for generations.”

Southard reported for training in Raleigh on Jan. 25, 1971 to earn a salary of $500 per month. He has worked in at least 16 different offices in western North Carolina, witnessed the uniform change four times. He is a witness to every evolution of the licensing process from the era of pounding out licenses on a typewriter and affixing pictures, to the automation and exhaustive computer upgrades of recent decades.

He’s had his share of wild experiences administering driving tests. Early in his career, a man taking the test turned into oncoming traffic and Southard reacted by grabbing the wheel and steering the car into the median to avoid a dump truck. On another trip, a lady had a box in the back of her station wagon during her driving test. She was a recent widow. Her husband was a snake-handling preacher who died of snakebite, and the box carried copperheads.

Southard has served multiple generations of the same family. He has served some of western North Carolina’s most famous — and infamous too — citizens. He renewed the driver’s license for Rev. Billy Graham one year and served moonshiner Jim Tom Hedrick another time.

Southard has been a constant amidst all the changes at DMV. For five decades he has advised young drivers, helped elderly citizens and served North Carolina, the DMV, and his community. He treats clients with the patience necessary to properly complete tasks and respect that every citizen deserves.

“We are grateful for the hard work and dedication Mr. Southard has shown during his 50 years of service to the state of North Carolina and the Division of Motor Vehicles,” said state Transportation Secretary Eric Boyette. “He has served the people of North Carolina with distinction and has always done his best to ensure the people he worked with were safe and responsible when they got behind the wheel. Even though he shows no signs of slowing down, his life’s work has served a model for anyone devoted to helping others.”