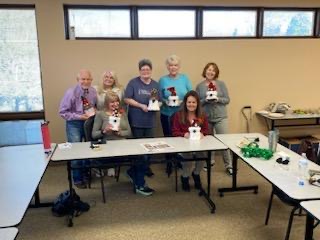 Support group for MS celebrates one year of helping community

This month marks the one-year anniversary of a new support group in Franklin for people affected by Multiple Sclerosis(MS). Last January, individuals came together to fill a void in the community starting the group, MS Support Group of Macon County, NC, to support those who have MS and to bring an awareness to the disease.

As stated by one member of the group: “I would hope the support group brings awareness to the community about MS and is a place for someone to come to and not feel alone dealing with this disease.”

The support group is open to anyone with MS as well as family members and caregivers. The group meets the third Thursday of every month from 3:00 to 5:00 p.m. at the Macon County Senior Services Building located at 108 Wayah Street, Franklin.

Another group member added: “It’s a place to share ideas on how to operate in this new normal and also to share feelings with people who understand. It’s a time to connect with others and just have fun. We try to plan something for each meeting.”

The group’s next meeting will be held on Thursday, January 19thfrom 2:00 to 4:00 p.m. The meeting will feature a guest who will help members with balance issues, a common side effect of those suffering from MS. Last month, the group enjoyed fellowship with a craft project.

The resulting damage to myelin, the protective layer insulating wire-like nerve fibers disrupts signals to and from the brain. This interruption of communication signals causes unpredictable symptoms.

“I used to be a very physically active person, now I walk with a cane or walker,” said one member of the support group. “I find myself watching people walk and wonder if they realize how fortunate they are. Every one of us has lost something but with great attitudes we will overcome.”

Everyone’s experience with MS is different and these losses may be temporary or long lasting. The symptoms, severity, and duration can vary from person to person. Some people may be symptom free most of their lives, while others can have severe chronic symptoms that never go away.

Scientists believe MS is triggered by a combination of factors. To identify the cause, research is ongoing in areas ofimmunology (the study of the body’s immune system); epidemiology (the study of disease patterns in large groups of people); genetics (understanding the genes that may not be functioning correctly in people who develop MS); and infectious agents (such as viruses).

While the group’s main goal is to support individuals with MS, their families and caregivers, the group hopes to educate the community about the disease. The local group has plans for a MS walk to get the community involved in the support group. The walk is in the planning stages and will be held either in last spring or early fall.