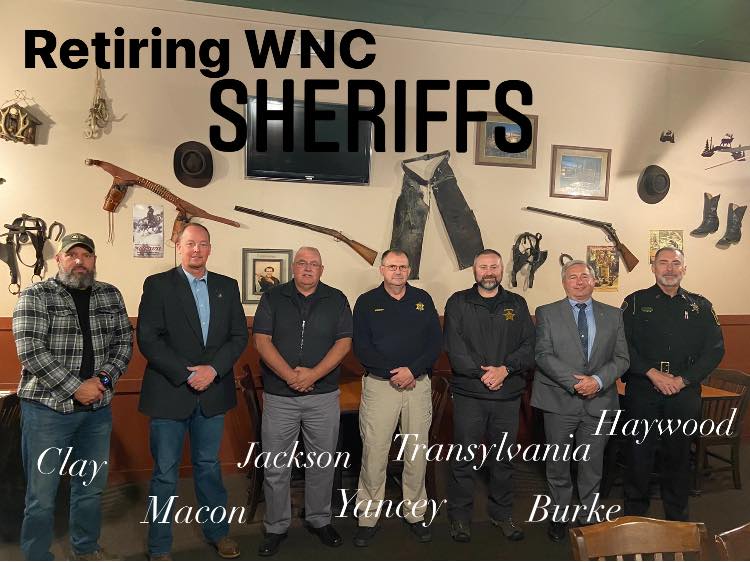 Seven county law enforcement agencies across Western North Carolina will see new leaders in 2022 as the Sheriffs of Clay, Macon, Jackson, Yancey, Transylvania, Burke, and Haywood Counties will not be seeking re-election.

During a meeting this week in Haywood County of the WNC Sheriff’s Association, the seven men gathered for what may be the last time in their careers.

Clay County Sheriff Bobby Deese was elected to Sheriff in 2018 after securing 56 percent of the vote. He announced in April that he will not be running for a second term as Clay County’s top law enforcement officer. While he is not running for re-election, Deese said he plans to continue serving in law enforcement and is not quite ready for full retirement just yet.

Macon County Sheriff Robert Holland on the other hand, will be retiring in 2022 after 31 years in law enforcement, 20 of which has been spent as Sheriff. Holland was first elected as the Sheriff of Macon County in 2002 working his way through the ranks of the department, serving as Detention Officer, Deputy Sheriff, Juvenile Investigator, K-9 Handler, and Detective Sergeant.

Chip Hall, who has spent the last 34 years dedicated to the Jackson County Sheriff’s Office, announced in August that he will not be seeking re-election in 2022. Sheriff Hall has served as sheriff for the last seven years and will retire having completed two terms as the county’s top law enforcement officer.

Transylvania County Sheriff David A. Mahoney announced earlier this month that he will not seek re-election in 2022 as he plans to retire at the end of his term. Mahoney began his law enforcement career with the Transylvania County Sheriff’s Department in 1991 and started as a dispatcher. He worked his way up the ranks as a detention officer, patrol deputy, patrol shift supervisor and a criminal investigator while also serving on the counties’ SRT team for 14 years. He was first elected as Sheriff in 2006, a position he has held ever since.

Filing for the office of the Sheriff opens on December 6, 2021 with primary elections scheduled for March, followed by the General Election in November 2022.