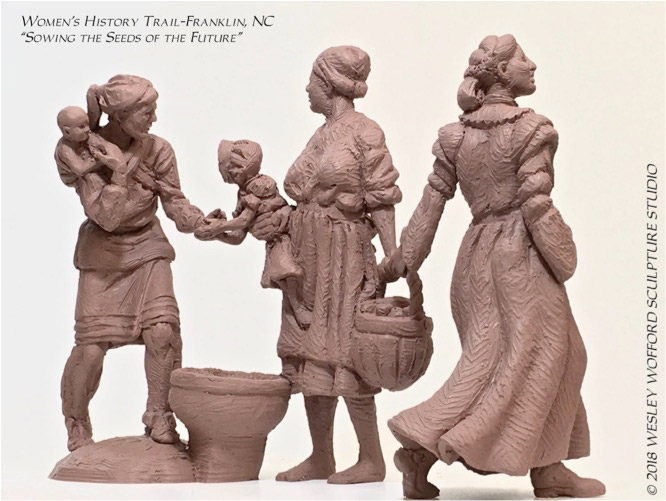 Monday night, the Folk Heritage Association of Macon County’s Women’s History Trail celebrated the completion of the “Sowing the Seeds of the Future” sculpture at the Franklin Town Council Meeting.

The sculpture, which was the brainchild of Barbara McRae, shows three women – Rebecca Morris (Cherokee), Salley (African American), and Timoxena Siler (White) – whose lives and cultures were intertwined in the earliest days of Macon County.  The Folk Heritage Association contracted with nationally renowned figurative sculptor Wesley Wofford to produce the sculpture.

The women featured in the sculpture include Na-ha Ka-ta-di-he a member of an illustrious Cherokee family that included her better-known brother, Junaluska, and uncle, Yonaguska. In the early 1900s, she married Gideon Morris, a Baptist minister, and became known by her English name, Rebecca. The Morrises were granted rights to Cherokee land under the Treaty of 1819, but were displaced, resorting to legal proceedings to win compensation. During the proceedings, they sold a slave woman, Salley, the second woman featured in the sculpture, to the locally prominent Siler family. Salley had a role in raising Timoxena, third woman in the sculpture, Jesse’s daughter, born in 1835. Timoxena, though well-educated and from a wealthy family, shouldered the burdens typical of White settler women of the period. These women – Rebecca, Salley and Timoxena – came from different cultures, but all were strong, resilient, and caring. Their stories illustrate the triumphs and tragedies that gave rise to our country.

The 7-foot-high bronze sculpture will be placed near the bridges and the Nikwasi Mound at East Main Street in 2023. The site is important historically and each of the women had connections to it. The reserve granted to Rebecca and Gideon Morris bordered the Mound tract, consistent with efforts by the Tribe to secure their most sacred places. Later, Jesse Siler owned this property, and the family protected the mound during their ownership. Recently, the Town of Franklin transferred the Mound to the nonprofit Nikwasi Initiative. Together with its partners, Nikwasi is working to enhance and beautify surrounding property as a public plaza that will serve as an inviting gateway to downtown Franklin.

The sculpture will be formally presented to the town of Franklin for placement in September.