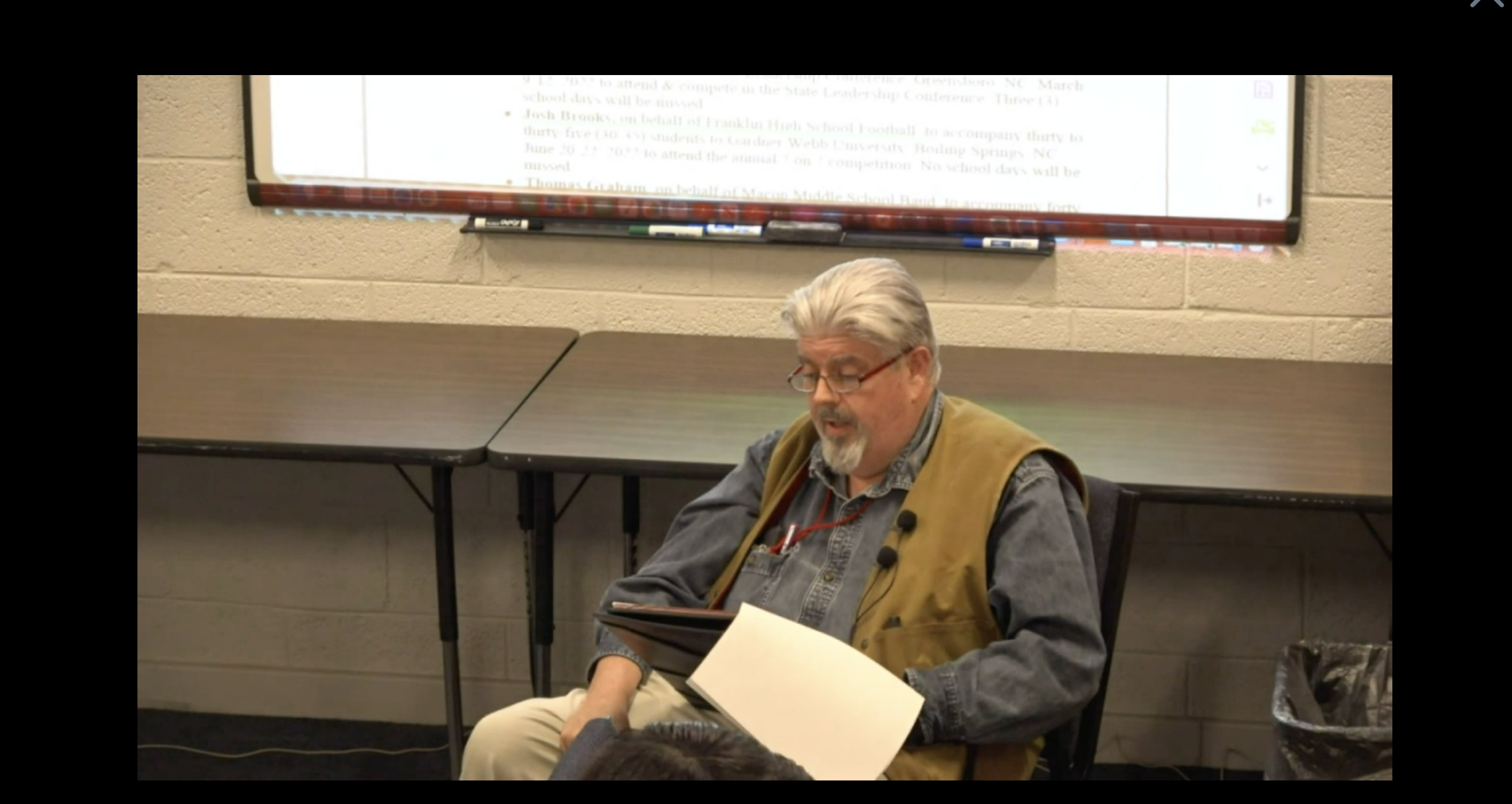 Macon County teacher and member of the North Carolina Association of Educators (NCAE) John deVille spoke to the Board of Education Monday night to question claims made by Senator Kevin Corbin and other members of the legislature regarding public school funding, specifically teacher pay and bonuses.

“The bonus that was discussed last night was provided by the GA through the Special Allotment for Teacher Compensation,” said Dr. Baldwin. “With the school board electing to provide additional funding in order to include local and federally paid teachers, each school teacher in Macon County will receive an additional supplement of $1,012 before withholdings.  This supplement will be included in the March payroll.”

While it is still unclear whether the state or local district is responsible for the delay in distributing the supplement to employees, Senator Corbin did offer clarification on the discrepancy in the allotted amount that will be provided to teachers.

“We were told the formula added supplements to each rural county and we were told the amounts for each by the non-partisan budget office,” explained Senator Corbin. All seven of my county’s estimates were pretty much dead on but Macon. They gave us the wrong number and that’s the number I gave Dr. Chris Baldwin because that is what I was told. I am so sorry and I regret that we were given the wrong amount for Macon County.”

However, Senator Corbin noted that with anything budgeted by a current General Assembly — future state leaders can change it once they are elected — that is the nature of changing legislators during an election cycle, however, it was the intent of the $100 million fund that it would be maintained well into the future.

The new funding is recurring, meaning that it will remain in the budget for the foreseeable future to help counties with planning.

According to Senate leader Phil Berger’s press office, 65 percent of the allocation formula is based on the county’s tax base, 25 percent on the median household income, and 10 percent on the effective tax rate.

The special fund was established to address funding discrepancies across the state in terms of locally provided supplements. The provision is meant to bring smaller counties into greater parity with more populous ones in terms of supplemental pay. For example, counties such as Wake ($8,873), Mecklenburg ($8,773), and Guilford ($4,927) include generous supplements already from local funds. But counties such as Alleghany ($500), Ashe ($600), and Clay ($24) do not. Under the new budget, supplemental pay in those counties will increase to $3,346 for Alleghany, $1,672 for Ashe, and $2,871 for Clay when factoring in the new state funds.

Senator Corbin also noted that in addition to the supplemental bonus, the first of its kind for North Carolina teachers, the state’s budget included other additional funding bonuses.

“Mr. deVille failed to recognize that in addition to the $1,000 supplemental bonus,  most teachers also received a $2,800 bonus in January plus pay raises paid retroactively back to July 2021,” said Senator Corbin. “Of course, a future legislature could decrease or even increase the supplement. Fact is, this is the first time rural NC counties have been given a teacher supplement from the State. I advocated for that and will continue to do so despite the lack of support from Mr. Deville and the NCAE. It is important to note that the NCAE is a political action committee that almost exclusively endorses democrat candidates. Despite no education experience or record of education support, the NCAE endorsed my democrat opponent in the last election. That is ok with me and quite predictable. Mr. deVille is acting to justify their lack of support for me. I have spent my entire adult life advocating and working for public education in NC and particularly Macon County. I don’t appreciate his negative bias. However, I will keep on working for public schools and teachers in NC despite Mr. deVille and his continued negative commentary.”

Members of the Macon County Board of Education noted that while they would always like to see increased funding for public education needs and salaries, they are extremely grateful for the support Sen. Corbin has showed and the supplement and bonuses employees did receive in this budget.