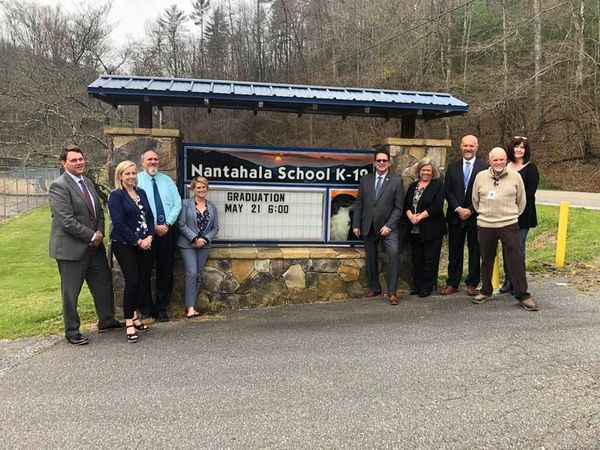 “It was my pleasure to welcome Superintendent Catherine Truitt to Macon County,” said Senator Kevin Corbin. “Since first being elected to Raleigh, I have made it my priority to ensure that folks in Raleigh are reminded that the state doesn’t end in Asheville. As one of the newest elected state leaders, Superintendent Truitt is already making the western part of the state a priority and I am looking forward to working alongside her to continue ensuring the residents in the West are not forgotten.”

Superintendent Truitt, a Republican, was elected last November to serve as the new NC State Superintendent. She began her career in education s a High School English teacher and spent to years in the classroom teaching both high school and middle school. She has been nominated twice for the Teacher of the Year Award. She spent her last three years teaching at West Johnston High School where she taught English to Juniors and Seniors. Under Governor Pat McCrory, Truitt was appointed to serve on his Senior Advisory Committee on Education in 2015. Governor McCrory even awarded Truitt with the Order of the Long Leaf Pine, the state’s highest honor, in recognition of her efforts to improve public education across the state.

Senator Kevin Corbin noted that while at Nantahala School, Truitt agreed to continue specialized funding for rural, geographically isolated schools, something Corbin has championed since first being elected to the General Assembly.

“Yes, she agreed by handshake to continue funding for small schools in Western NC,” said Senator Kevin Corbin. “We took her to Nantahala School and she was more than impressed with their work ethic and progress.”

“To my knowledge, this is the only time that a Superintendent of Public Instruction has been in Macon or Swain County,” said Senator Corbin. “Students from Swain County prepared and served our lunch. It was a great visit and she promised there would be more visits to come.

NC House Rep Mike Clampitt joined the tour of Swain County High School and Bright Adventures Pre-K in Bryson City and said he welcomed the conversation with her about the need for additional funding for equipment, school supplies, and funding for infrastructure upgrades.

“If I had four more classrooms, we could have a universal pre-K program in Swain County,” Sale said.

Truitt said at the state level is there is a push to fund more slots for pre-K.

Truitt and members of her team visited Smokey Mountain Elementary School during their tour through North Carolina’s western school districts.

“What a wonderful and gracious greeting we received,” Truitt said.  “To have school board members, administrators, incoming and outgoing superintendents; that’s incredible.”

School and district leaders accompanied Truitt to several classrooms where she observed and spoke with teachers and staff about the unique environment at Smokey Mountain Elementary.

“I love that you can tell the teachers have a heart for kids,” she said.  “The way they talk to their kids, and the way they interact with their kids is really special.”