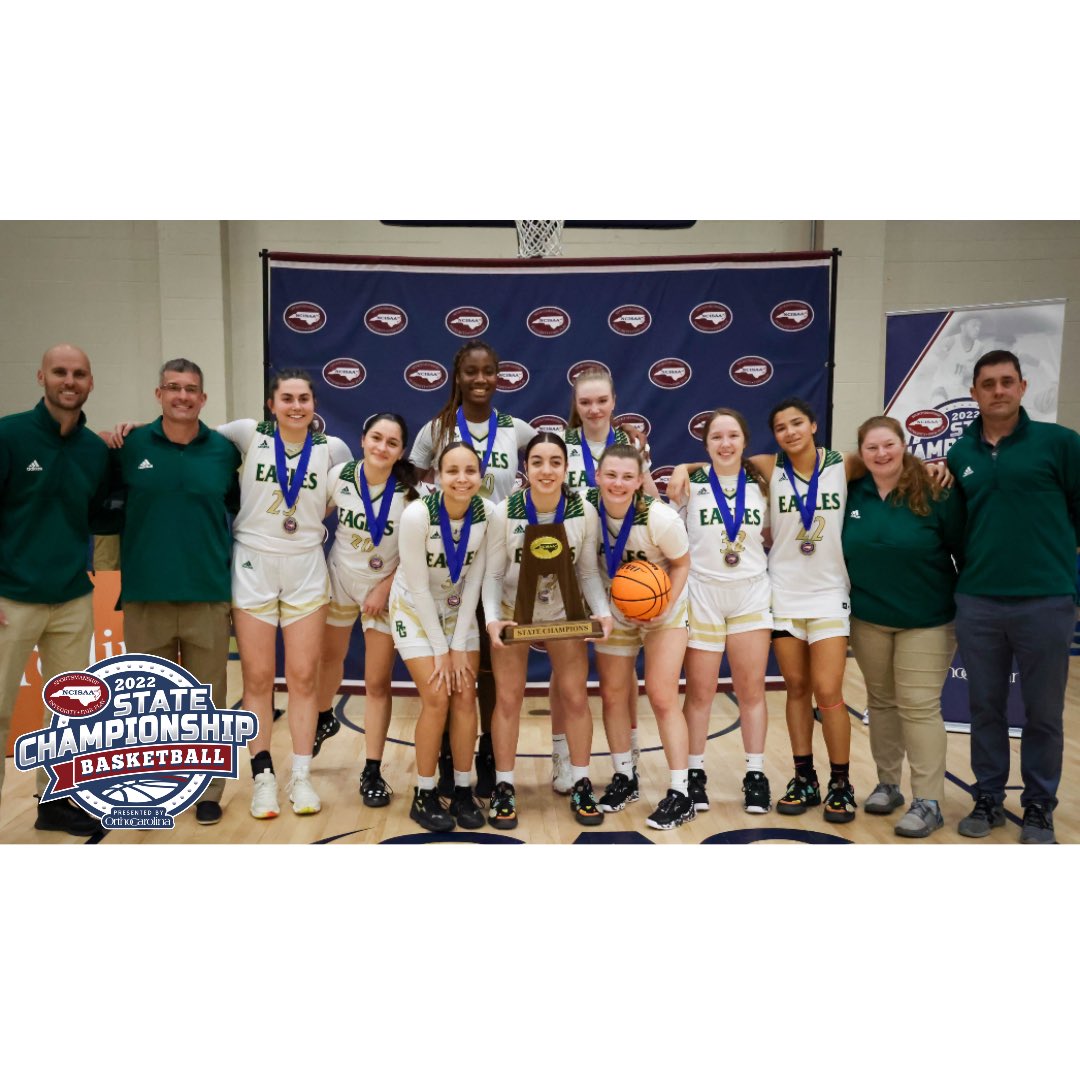 “Any time one of our teams wins a championship, it is huge for our school,” said Earnhardt. “I am so proud of this team and the hard work they put in this season. This was our ninth Final Four and our fourth appearance in the state championship game in 15 years. I am so happy for these coaches, these young ladies, and our school, but also for all the former players who laid the foundation for what was accomplished on Saturday night.”

The championship game was a back-and-forth battle against the No. 3-ranked Lady Knights. Rabun Gap jumped ahead early, scoring the first four points of the game and finishing the first quarter 12-6 off a three-pointer by Tuana Coskun. The Lady Eagles held a narrow 16-14 lead at the end of the second quarter. Strong defense and excellent rebounding propelled Rabun Gap to the title. The Lady Eagles held NRCA to 26 percent from the floor and out-rebounded the Lady Knights 35-26. Rabun Gap logged 12 offensive rebounds.

Mia Wilson, who was also named All-Conference this season, is a junior at Rabun Gap and is in her second year as at the school. While originally from Miami, Florida, she and her family now call Murphy, North Carolina homes. Prior to attending Rabun Gap, Wilson was part of the Murphy Bulldog basketball team that went 30-0 before the state championship game was canceled, ending the season as co-state champions.

Wilson, a shooting guard that also dominates as point guard whenever Coach needs her, says this season was unbelievable.

“It feels amazing,” said Wilson. “I don’t think people really understand how hard we’ve worked and pushed through this season. We’ve battled and even had to go through losing a teammate due to injury. It hasn’t been easy but, I’m so proud of my team which is family to me of how we’ve pushed through and finished strong. This is an amazing school and many great players have graduated from here and I’m glad we could continue the tradition and finally get that state chip for them.”

Vivian Ross is also a Junior at Rabun Gap and was born and raised in Cherokee, North Carolina. She spent the season as a shooting guard and while an injury kept her out of the championship game, she said she is so proud to be part of the history-making Lady Eagles.

“It feels amazing to be a state champion even though I didn’t get to actually play in the state game due to an injury,” said Ross. I am so glad to be a part of Rabun Gap history and I hope we do it again next year.  The best part of the season for me was when we played 4 games in 5 days over Christmas. We stayed in a hotel one night and I think that those games is really what shaped us into becoming a championship team because after those games it seemed like we clicked more and played as a whole.”

Rabun Gap Sophomore day student Angelica Vanflorcke was born in Fort Lauderdale, Florida, but she has lived in Cashiers for her entire life and has been playing basketball for as long as she can remember. Playing Guard for the Lady Eagles, Vanflorcke said the support the team received this season has been a driving factor in their success.

“It’s such an amazing feeling knowing that we were not only the first girls’ basketball team to win the state championship, but the first girls’ sports team too,” said Vanflorcke. “When we won the state championship this year it was such a great feeling to know that a lot of fans decided to make the drive over to watch us. I was so happy that they got to watch us make history for Rabun Gap.”

With so much support from their peers, Vanflorcke said hosting home games was the best part of the season for her.

“The best part of the season for me was being able to host the semi-finals on our home court,” said Vanflorcke. “The crowd that showed up to cheer us on definitely brought the energy and being in that environment was so fun. We also went undefeated on our home court as well, so that was also a highlight of our season.”

As Vanflorcke mentioned, the Lady Eagles were undefeated at home and went 23-6 overall for the season. The Lady Eagles had a nine-game winning streak to close out the season after a huge 48-47 victory over Rabun County, which Earnhardt called the turning point of the season.

Wilson said the season had a lot of highs and although they finished on top… she said they faced challenges that could have broken them… but instead, it made them stronger.

“The best part of the season for me was one day before practice after we lost to Hebron Christian we came into practice and everyone sat in a circle without our coaches and talked and we just let out our feelings and talked to get on the same page and after that, we didn’t lose a game,” said Wilson. “We fully locked in as a team and recognized if we were going to play for each other we were going to do something no one else in Rabun Gap history could do. “

Being part of a team to give Coach Earnhardt his first state title was important to the girls, especially since they credit him and the other coaches for their wins.

“Coach Earnhardt, Coach Barnes, Coach Nice, and Coach Willard poured so much time into us,” said Wilson. “It helps to have coaches that work endlessly for us when they have their own families and children. I’m so glad we have a great coaching staff!”

Ross echoed Wilson’s comments and said the coaches made all the difference in the season for her… and are the reason she will never forget the past year.

“I think that this year’s basketball season will always be one that I’ll remember because I finally had coaches that truly cared for me,” said Ross. “I also had teammates that I had just met a few months before and they turned into sisters which is something that is really special to have on any team.”

Looking toward the future, Vanflorcke said this year’s win is just the beginning for the Rabun Gap Lady Eagles.

“This year’s season was definitely a turnaround for us and it brought me so many new teammates that I am so glad that I got the chance to play with and build amazing friendships with,” she said.