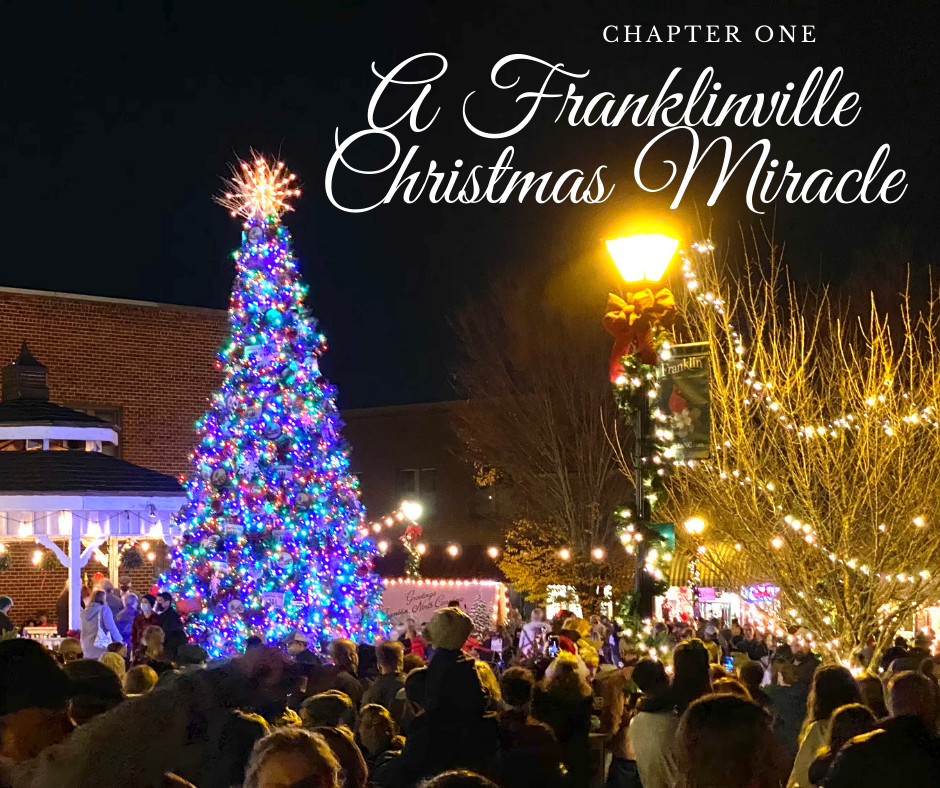 A Franklinville Christmas Miracle – Chapter One

Christmas in Franklinville is a magical time of year. The entire town transforms into a wonderland of holiday cheer. The weeks leading up to Christmas, residents hold toy drives and cook meals for those in need. They celebrate the season on the town square with Christmas hymns sung around the Nativity Scene that has been a holiday staple for generations. Time slows down. Neighbors stop to catch up with each other around a campfire the local Boy Scout troop sets up to raise money for the year. Christmas in Franklinville is unlike anything you have ever experienced — there is just something special in the air.

April runs Franklinville’s only newspaper. A publication she puts out herself once a week. Despite job offers at some of the biggest newspapers in the country after she graduated from college, she moved back home to Franklinville to take over the town newspaper, which was at risk of closing. Something about the smell of newspaper print, knowing that the little league Champion front page would be clipped and hung on refrigerators just won out to the big paychecks offered by the Post or the Times. Franklinville was her home, it was her heart.

The town’s Christmas issue is always the biggest issue of the year — tracking Santa’s visits to the children’s hospital and the orphanage kept April on the holiday beat. With the Mayor’s wife sick, April found herself tasked with making sure the annual Christmas Eve parade, a 30-year tradition in Franklinville, went off without a hitch.

Luckily for April, Franklinville’s Santa, a retired state worker known as Brice the rest of the year, was a gem to work with. Brice had served as Franklinville’s Santa for generations. This year, while visiting families around town, he was holding babies that belonged to the babies of the first children he ever met as Santa. Three generations have experienced Christmas in Franklinville because of the kindest of Brice. With Santa Brice booked as the Grand finale of the Christmas Eve parade, April continued rushing around town to get the Christmas Day Franklinville Scoop to the presses and everything was going according to plan — or so April thought.

While leaving Lobstertree’s General Store in a furry to make it to the monthly town meeting, April ran smack dab into Dustin Smith, Santa Brice’s only son. Dustin left Franklinville right after high school. The small-town life was too slow for Dustin who quickly found success as a big-time investor in the city. Dustin rarely visited Franklinville and has never understood his father’s unwavering dedication to playing Santa each Christmas. A former high school classmate of April’s, Dustin reluctantly swooped into his hometown for business and his type of business was not the type April wanted anything to do with.

Dustin worked for an investment firm that preyed on small towns. They would hunt out struggling independently owned businesses and wave some cash in front of them and buy them out — only to turn around and turn them into another generic corporate entity.

The struggling business Dustin was in town to buy — the Franklinville Scoop. Since April had taken over the business after college she had managed to hold on to the weekly print publication while transforming the newspaper for the digital age and while the business was holding on — it was just barely surviving. Refusing to cave to the pressures of technology by going completely digital, April regularly fought to prove that print newspapers still had a place and a purpose. Dustin on the other hand believed that the only purpose The Franklinville Scoop had was attached to dollar signs.

After months of calling and emailing April, only to be ignored, Dustin showed up in Franklinville to make an offer on behalf of his company in person — an offer that was set to expire the day after Christmas.

After running head-on into April at the General Store, Dustin offered to replace her coffee if she would just hear him out — however as always, April was rushing to her next lead. Dustin let her go, knowing he would see her later that night for the annual Christmas Stories on the Square with Santa.

Brice, who didn’t announce his visit beforehand trotted over to the card company where his mother Sharon worked. Sara was right in the middle of shining Brice’s boots for the event later that evening when Brice rang the bell on the counter. Elated…and shocked. Sara embraced Dustin and the two caught up on work and Dustin’s personal life. With Dustin being an only child, Sara and Brice were eager for grandchildren but Dustin had a different idea in mind. He was focused on his career and climbing the ranks of the company. His career goals left little time for much else, especially a personal life. With deadlines for work approaching fast, Dustin had little use for Christmas this year and was not interested in getting wrapped up in Franklinville’s over-the-top holiday traditions. He wanted to swoop in, get April to sign the deal, and wave in the rearview to his parents as he headed back to the city. Although Sara knew that was his plan, she held out hope that the magic of being home for Christmas would allow Dustin to slow down just a little, even if we’re just for a few days.

Dressed in their pajamas with hot chocolate in hand, children gathered around Franklinville’s 50 foot tall Christmas tree decorated by the spunky local florist May’s Flowers. May and Franklinville’s own Picassos — Patt and Gwondolyn, designed the tree each year. It was a spectacular sight. Right before Santa began the annual tradition of Stories on the Square — Franklinville Mayor Bab Scatt flipped the switch and revealed the stunning tree fully lit for the first time that season. As Dustin made his way up Main Street, on the phone with his boss, the glow from the tree stopped him in his tracks. He paused mid-conversation and struggled to find the right words. He quickly snapped back to his phone call, but for a minute, Franklinville’s Christmas tree reminded him of growing up in that small town.

April sat on stood across from Santa, snapping pictures for the Scoop of boys and girls listening as Santa ran a hometown favorite from the Suminkers Family book collection. Her work was interrupted when Dustin walked right in front of her camera right as little Susie was sipping her hot chocolate and the foam gave her an adorable milk mustache. Oblivious to his action, Dustin dismissed April’s frustrations and once again attempted to talk business. While April knew she needed to at least hear Dustin out, as she wasn’t sure how much longer she could keep the paper afloat, she wanted to enjoy the evening. With the mayor’s wife out sick, April was pulling double duty with taking pictures for the newspaper and passing out candy canes to the crowd, so she decided to put Dustin to work. If she was going to entertain his offer, she was at least going to make him work for it.

She smacked a Santa’s hat on Dustin and sent him around the square with a basket full of candy canes. As he got to the far corner of the square, nearly out of earshot for Santa’s story, Dustin came across a little boy in tattered clothes. As he reached into the basket to give out the last candy cane, the little boy excitedly asked Dustin if the candy cane was from Santa himself. Not knowing what to say, Dustin shrugged and said sure. Confused as to why the boy looked so astounded, Dustin asked why he asked. The little boy responded that his family didn’t have much so he was good all year long and told Santa the only thing he wanted for Christmas was a candy cane. He wanted a candy cane so he would be able to give it to his mother on Christmas morning so she would have at least one present under the tree.

Dustin didn’t know what to say. He had very little interaction with children in his life, and life in the big city made meaningful interactions with people outside of work scarce. He forgot that not everyone had the same opportunity as him. He walked away from the little boy and headed back to April. He wasn’t sure how to feel. He was happy to have brought joy to the little boy but sad that something so small was so meaningful.

Dustin stood to the side watching as Santa read a handful of more stories to the children of Franklinville, remembering when he would sit at Santa’s feet beaming with pride knowing that his dad was Santa. It had been years since Dustin remembered that feeling.

After everyone left and April finished cleaning up, she agreed to sit down with Dustin at Curahoo, the local brewpub, and hear him out. Dustin explained that his client was looking to purchase newspapers in small towns across the country to develop a chain of digital resources. He was prepared to purchase the newspaper outright and even let April continue to work at the newspaper, however, the name would change and it would no longer be the weekly print publication the folks of Franklinville depended on. April knew she needed to consider it, but her love of writing and knowing that newspaper clippings filled scrapbooks and held memories for generations kept her from taking the deal right then. Dustin warned her that if she didn’t take the deal by Christmas, his client would just wait until the newspaper went bankrupt and buy it anyway, for less money and without the promise of a job for April. She promised to think about it more.