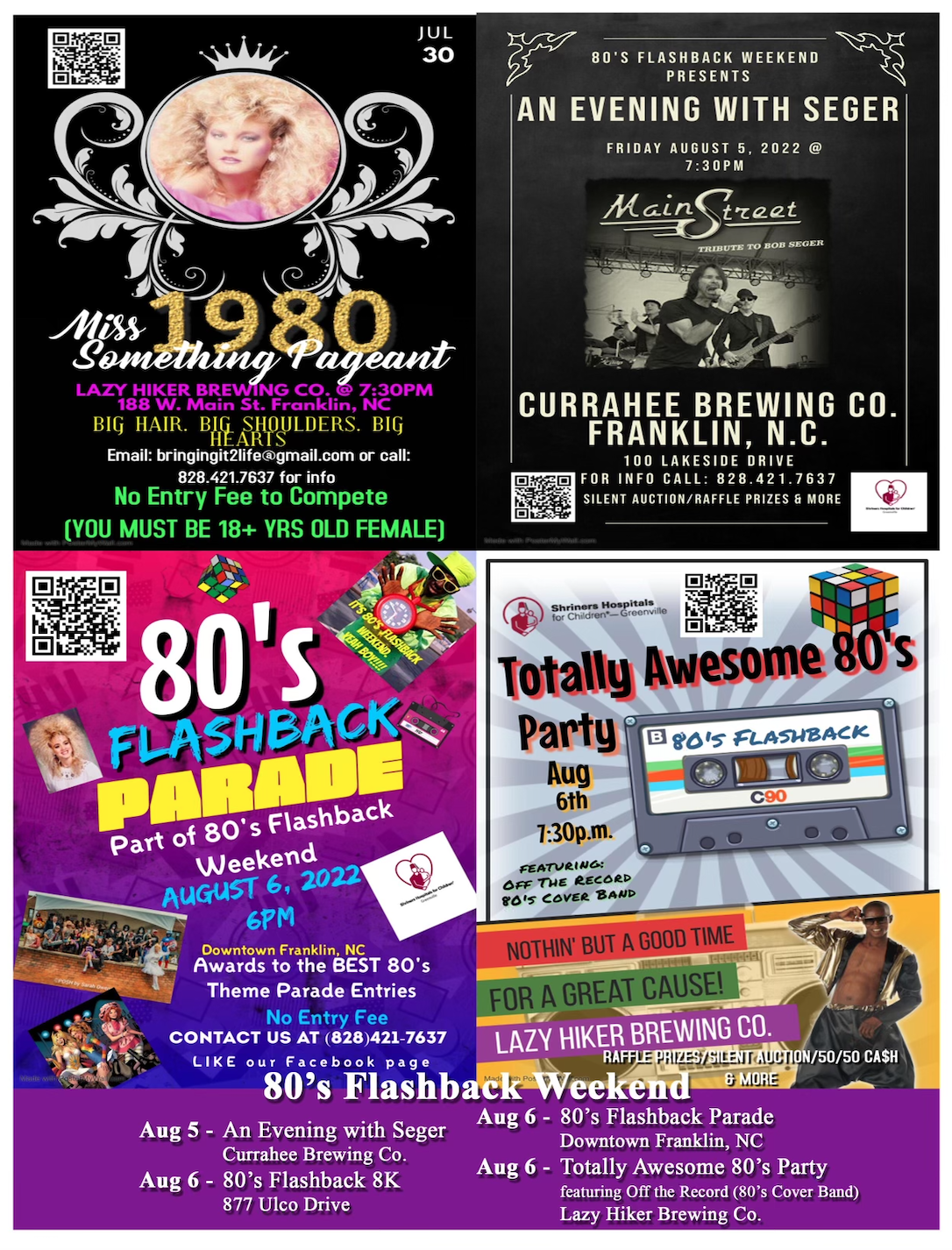 Saturday, July 30 kicks off the 8th annual 80s Flashback Week in Macon County – a blast from the past to raise money for the Greenville Shriner’s Hospital.

Hosted by community member Dave Linn the first week of every August, what started as an 8K race seven years ago has grown into a multi-day, weekend celebration of all things RAD to raise money for families who receive care at the Shriner’s hospital. The annual event raises around $15,000 a year and highlights local families who receive services through the Shriner’s hospital.

The first event of the week kicks off at Lazy Hiker Brewing in Franklin with the Miss 1980 Something Pageant at 7:30. This 18+ pageant features contestants vying for the coveted title of “Miss1980 Something” and a chance to serve as the Grand Marshall in the 80s Flashback Parade.

The “Miss 1980 Something” will focus on 1980’s makeup, hair and gowns, talent, and personal interview questions and answers.

The time traveling weekend continues Friday, August 5 at Currahee Brewing Co. with “An Evening with Seger” beginning at 7:30 by cover band, MainStreet. MainStreet is a nationally known touring Bob Seger Tribute Band that recreates all the hits from the legend himself, Bob Seger. The event will also feature raffle prizes, silent auction items, and a cash 50/50 drawing. 100% of the proceeds raised will be donated to the hospital.

One of the biggest events of the week comes on Friday when downtown Franklin transforms for the annual 80s Flashback Parade at 6 p.m. Downtown Franklin will be flooded with all your favorite 80s characters and awards for the best float theme will be presented at the Gazebo.

To finish out the week with a bang, the Totally Awesome 80s Party will be held at Lazy Hiker Brewing beginning at 7:30 following the parade. The party will feature Off the Record, an 80s cover band rocking into the night.

Get your hairspray ready, tease your hair as big as your shoulder pads, and make plans to check out all the totally rad events this weekend and have “Nothin’ but a good time for a great cause!”