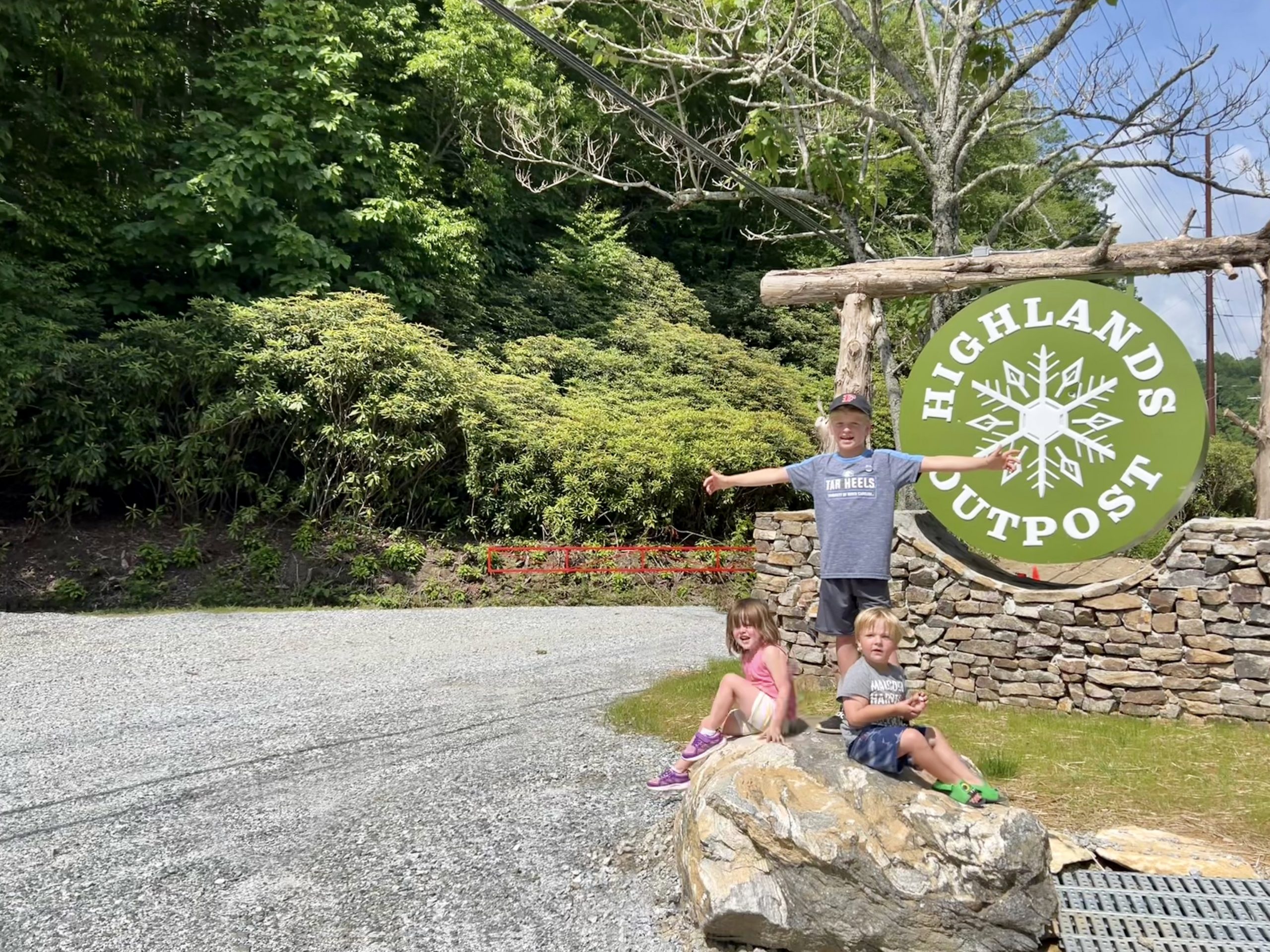 The Inside Scoop: Highlands Outpost is the perfect one-stop-shop for adventure

Have you ever wanted to soar through the mountains and jolt around the trees with every twist and turn of the mountain ridge? Well… I never knew I wanted to until the kiddos and I spent the day at the Highlands Outpost (formally the Scaly Mountain Outdoor Center) on Sunday afternoon. 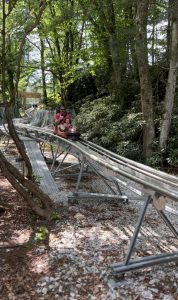 New this season, the Highlands Outpost has added the Scaly Mountain Screamer — a thrilling mountain coaster that lets you speed through the trees! The coaster, which is the longest of its kind in North Carolina is brand new this year and in all makes for about a 6-minute ride. With two inclines propelling you to the top of the mountain, you catch some serious speed heading into 360-degree turns and downward slopes.

The coaster doesn’t require reservations and is open from 10 a.m. to 7 p.m. Sawyer was stoked to reach the minimum height requirement of 38 inches — letting her take a trip on the coaster with her dad. For a child’s ticket between the ages of 3 and 6 — and at least 38 inches tall — they can ride the coaster for $7 for a single ride, $12 for two rides, or $15 for three rides! Sawyer would have ridden that thing by herself and all day long if I would have let her, but as you all know, she is feral and knows no fear!!

Turner took a ride by himself — but to get a little extra weight on the coaster, which means you also get more speed — he and I also rode together. Youth tickets between the ages 7-12 — and 54 inches to ride alone — are $14 per ride, $22 for two trips, or $30 for three tips on the coaster. 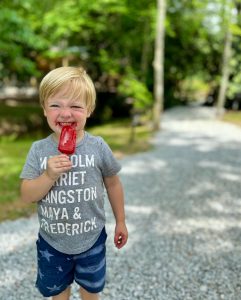 Nick and I traded off turns hanging back at the clubhouse with Kyler… who just barely reached the minimum height for the coaster — but decided he preferred to watch and eat a delicious fruit pop instead. I wanted to be the cool mom and reach maximum speeds with Turner — so although I had the option to use the brakes to slow us down — despite my fear (which I expressed in the video I took but am too embarrassed to share with you) we went full throttle through the entire trip, which probably spanned just about a mile in length. For an adult ticket, which is anything over 13 years old, tickets were $18 for one ride, $32 for two rides, or $40 for three trips down the coaster.

After we finished up with the coaster, we took a break from the speed and did some fishing in 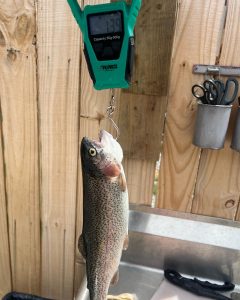 the trout pond. We even got to see a resident turtle sunbathing on the surface. You get to keep anything you catch in the pond, which is generously stocked. Both Kyler and Sawyer reeled in a trout each — which we took home to throw on the grill for $8 a pound since Nick cleaned it himself in the station provided beside the pond. If you don’t want to clean what you catch by yourself, the Highlands Outpost has a great staff to help do the dirty work for you. Brandon was fantastic in bagging up our fish and storing it for us while we continued to enjoy the park. The best part about the trout pond is if by some small chance you don’t catch anything… it doesn’t cost you a thing to fish, and they provide all the bait and poles you need!

Right beside the pond is a fun gem mining flume. The kiddos split the large bucket — which was 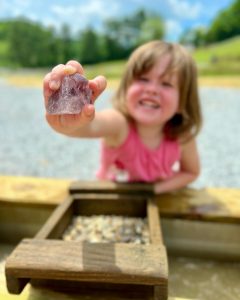 $25 — and plenty big enough for all three kids. They absolutely loved sifting through the locally sourced dirt to find beautiful treasures from local gem mines right in Macon County. Sawyer was amazed by the “real gold” she found — I just couldn’t crush her heart to correct her that it was only pyrite. In the gift shop/ ticket counter of the park, they even have pre-packaged bags of dirt and gems as well as a sifter for purchase in case you wanted to do some gem mining at home.

Our last adventure in the park was tackling the extreme tubing, which scales the mountain for what seems like an eternity. I am confident Sawyer liked the escalator-style belt that rides you to the top of the mountain more than she liked tubing down. You can pay for the tubing by the hour, which lets you go as many times as you want. If you have ever been to the park in the winter, the summer tubing is on the same hill as the snow tubing, with the track converted for summer. With a little help of some soap (or maybe something from Clark Griswald) the staff helps load you into one of the two chutes down the mountain. Probably the best part of the tubing was the water features stationed along the mountain for some added fun — and much-needed cooldown.

Once again, Kyler was hesitant to try out the big hill but Nick was able to talk him into taking a few runs at the kiddie hill, which was much more his speed!

A great BBQ restaurant just opened on sight for you to get a bite to eat, or the ticket booth has 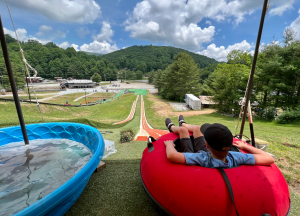 snacks to hold you over while you explore the park. The Highlands Outpost offers combo deals on various attractions and also has group rates available. I talked to a family from Alabama who are in town so their daughter can go to summer camp in Highlands, and their camp is taking a field trip to the park later this week. What a fun way to spend a summer afternoon!

The family and I had the best time exploring the Highlands Outpost — and I managed to walk away without any broken bones or torn muscles this time! So I consider that a win! It was definitely a great way to spend the day and had a little something for everyone to enjoy!