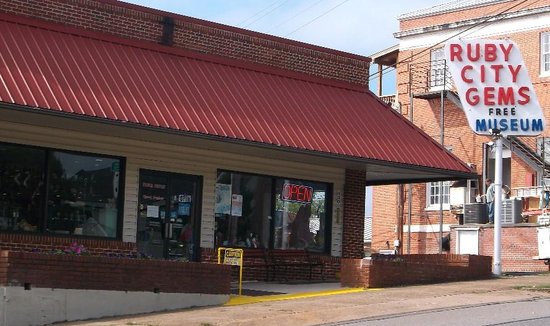 The GL&W gem show is set to open Thursday, August 6 in Macon County – with smaller shows being hosted in other areas of the county during the same time. The annual event, which was rescheduled due to COVID19 – has been an important event for local businesses for decades, and with sales revenues down due to the Pandemic, this year’s event may be more important than ever.
“The gem shows bring a lot of people to town,” said Jennifer Klatt, who owns Ruby City Gems with her husband Kevin. “Whether you’re a rock hound, collector, jewelry maker, or another business coming to purchase for their store, the gem show appeals to so many different people it would be a great loss for us as well as the town if it wasn’t held.”
Ruby City has been attending the gem show since the 70s, right at the height of Franklin being named the “Gem Capital of the World.” For the last 50 years, Klatt said that Macon County has played hosts to two gem shows, one in May to coincide with Mother’s Day and another in July. With the May show being canceled entirely this year, rescheduling the July show became more important than ever for the local business.
“The main benefit for us is to be able to purchase new and unique items for the store,” said Klatt. ”It also gives us the chance to make new contacts and customers.”
Ruby City Gems sits just at the top of Town Hill in Franklin and over the last half a century, the shop and museum has amassed a brilliant collection of precious stones. Ruby City’s history in Franklin dates back to 1954 when a man named Ernest Klatt and his bride Violet relocated to Franklin from Florida in search of cooler weather. Ernest was the definition of the American Dream, working his hands to the bone on farms across the South as a young boy before embarking on a self-made real estate career which grew to span the borders of seven states.  After arriving in Franklin, Ernest met Ellis Soper, a chemical engineer and world traveler who had accumulated a large collection of minerals, gemstones, and artifacts. Ernest admired Ellis’ collection and was able to purchase it, which was the very first inventory used to open up his gem show.
Ernest passed away in 1998 and his wife Violet passed away the year after. Along with the real estate and Gem Museum built by the couple, they left behind a legacy of honesty and hard work – something their family has spent the last two decades honoring.
The store and free museum on Main Street remain much as Ernest first designed it, free for all to see and enjoy. Ernest was the grandfather of the current store’s owner – Kevin and his wife Jennifer.
Like so many other small business owners, Ruby City is doing their best to keep the doors open during this unprecedented time. This weekend’s gem show will hopefully give them the economic boost and opportunity to keep serving Macon County for years to come.
Klatt said that the organizers of the event have been in constant contact with vendors relaying safety and health precautions as well as working with county officials such as Macon County Fire Marshall Jimmy Teem to ensure compliance for state and local regulations currently in place.
“The event organizers and all of the vendors who are participating are taking all necessary precautions –wearing masks, social distancing when we can, and frequent hand sanitizing,” said Klatt. “The vendors are all requiring masks to be worn. They usually provide hand sanitizer at each booth as well. We have preordered merchandise to lessen time at the show.”
Although the event only lasts through the weekend, Klatt said that it brings in shoppers who will benefit a hurting local economy.
“The gem show does offer extra jobs during the time they are here,” said Klatt. “With locals being hired to set up and take down the tents and get ready for the weekend. It also gives so many people an opportunity to see rocks and gems that most people would never be able to see otherwise.”
Vendors from all over the country are expected to attend the gem show. The largest tent at the Watauga Event Center located at the bottom of Cowee is wholesale only, but most of the outside vendors are open to the public.
This content is part of The Southern Scoop’s promotional opportunities for advertisers. To learn more, contact us today at editor@thesouthernscoopnews.com.