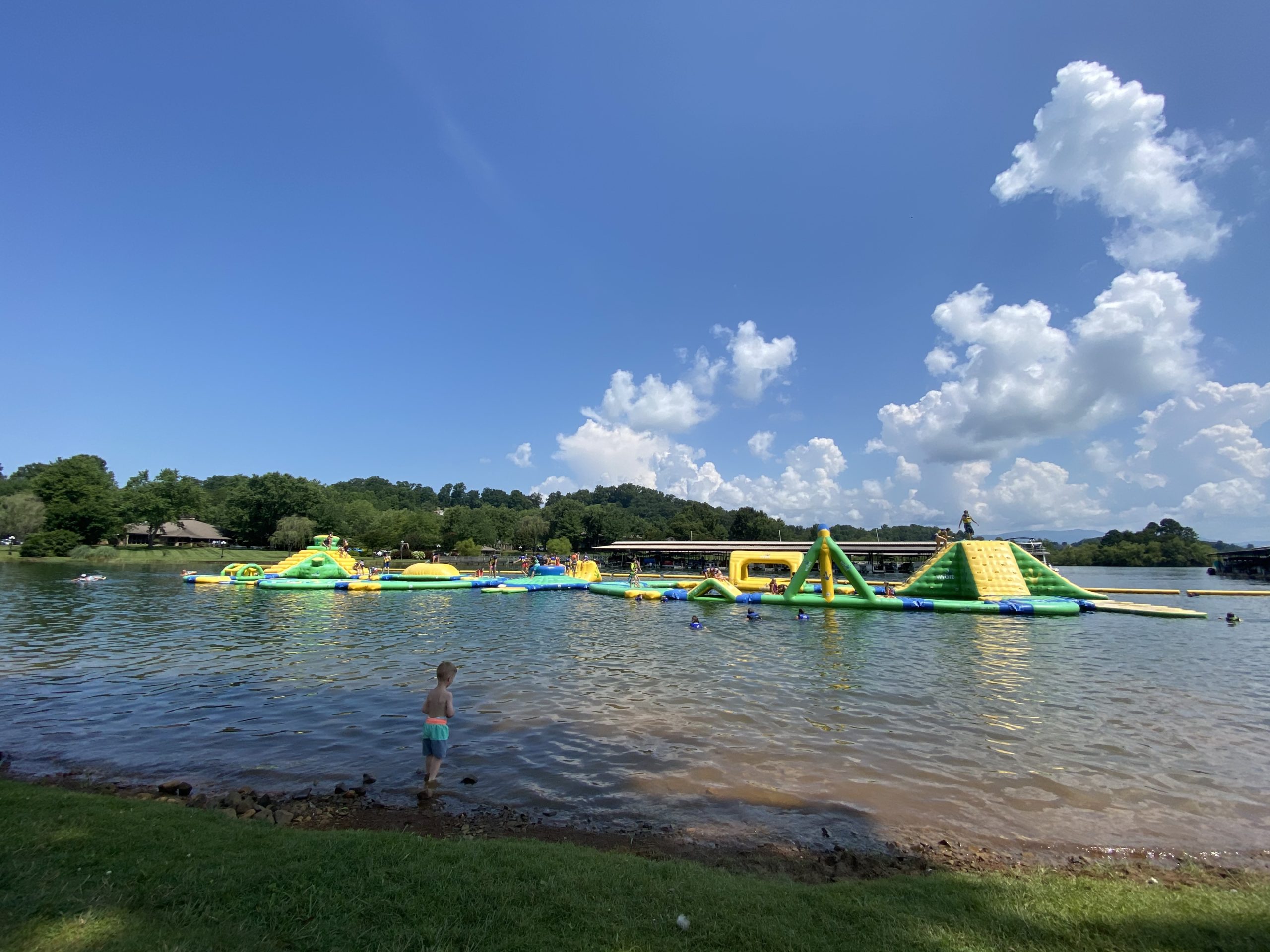 Just a short drive from Franklin in Hiawassee, Georgia you can find the all new Splash Island Water Park at the Ridges. The family and I drove over Saturday morning, and even after our van blew a head gasket and a local taxi company picked us up in a limo to take us the last 5 miles to the park, we had a great time. 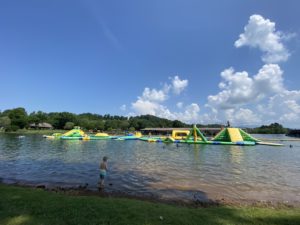 course that provides hours of high-energy fun for the whole family. The park is opened from 10 am to 7 pm and cost $10 per person for an hour of play or $20 for an all day pass. There are a ton of group and family pricing offers too. The admission price covers your life jacket cost, and only those who are using the inflatables have to pay, so parents can post up on the shore and watch for no extra cost.

The water park is located in the Marina as part of the Ridges Resort. Parking is limited so you can either have someone drop you off or park at the hotel and get shuttled to the water. There is a small shack at the beginning of the dock, clearly visible, where you sign up and pay. You do sign a waiver before being allowed to play. There are nice, clean restrooms in the parking lot to use as well.

The inflatables are a ton of fun – however after 5 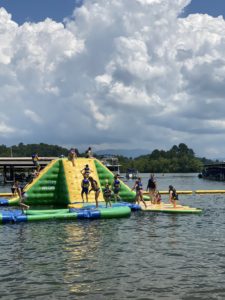 minutes, I quickly realized just how out of shape I am. I was pretty out of breath after the first obstacle – and two times around the course, my arms were basically noodles. Turner, however, at 7 years old, could have played for hours. He is a bit on the cautious side, and not the most adventurous kid, but even he had the best time.

The obstacles have low, medium, and high cliffs to jump from, slides, swings, monkey bars, and more. There is a no flipping or diving rule for safety, and they are pretty strict about it. Ignoring the warning can get your day of fun cut short. The course zig zags around and makes it easy to maneuver around obstacles you aren’t comfortable attempting. A downside to the park – is it is a free for all – so there is no one direction, and there are people going back and forth, up and down, and it’s a little chaotic, but all in good fun. 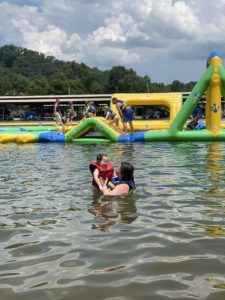 There are lifeguards stationed around the park. There were two while we were there, one on the dock and one on the shore. If you do have little ones, know that one the highest, deepest part of the course, there aren’t lifeguards, so make sure you keep an extra out.

The website says kids 7 or older can go alone, and that younger children will be allowed, if accompanied by an adult. We didn’t’ take Sawyer out, but saw a girl around her age wearing puddle jumpers of her own, that was allowed to go with her father.

They limit participants currently due to COVID19 with a 35 person limit, however, with so many people coming and going, that fluctuates. We had to wait about 15 minutes, for the next wave of people to be allowed on. There weren’t enough life jackets available for both me and Nick, since they are just grabbed up and a lot of kids were wearing adult jackets, so we had to wait for one to be given up. They did add time on to our hour to make up for it.

I had hoped for a sandy beachy area to hang back 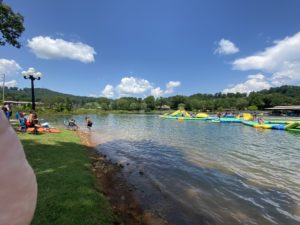 with the littles while Turner played, but they didn’t have that. It’s a rocky shore, and has a relatively shallow play area, but not what I would have expected. At one point I had Sawyer out in the water with me, about to my shoulders, and got a whistle blown at me and was told we both needed life jackets on to the play in the water – however I also saw some adults a little further to the side, further away from the main park area, on their own floaties and relaxing in the lake.

We brought a cooler of snacks, which is allowed. I 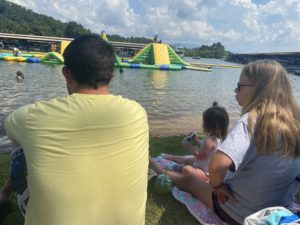 would highly recommend that. They do have snacks you are able to purchase if you don’t feel like packing a cooler. There are no alcoholic beverages allowed. Lots of people had pop up tents set up along the shore, which had pretty limited space. But if you were planning to spend the day there and are able to snag one of those spots, it would be a pretty sweet set up for a day. The park has a few picnic tables and chairs set up on the shore, but they were snagged up pretty early too.

Another cool part about the park is the extras they have available to rent – paddle boards and kayaks and even a banana boat they will ride you out on the lake with. I didn’t see this advertised anywhere, so I wasn’t expecting it, so it was a nice surprise. Had I known about those options, I would have planned to spend more time there taking advantage of all the cool activities to do. 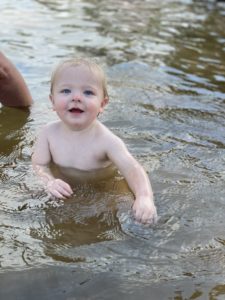 Overall, I would strongly recommend a trip to the waterpark. It’s a quick drive from anywhere in Western North Carolina and very affordable. Be prepared to get in your cardio while having the most fun possible!