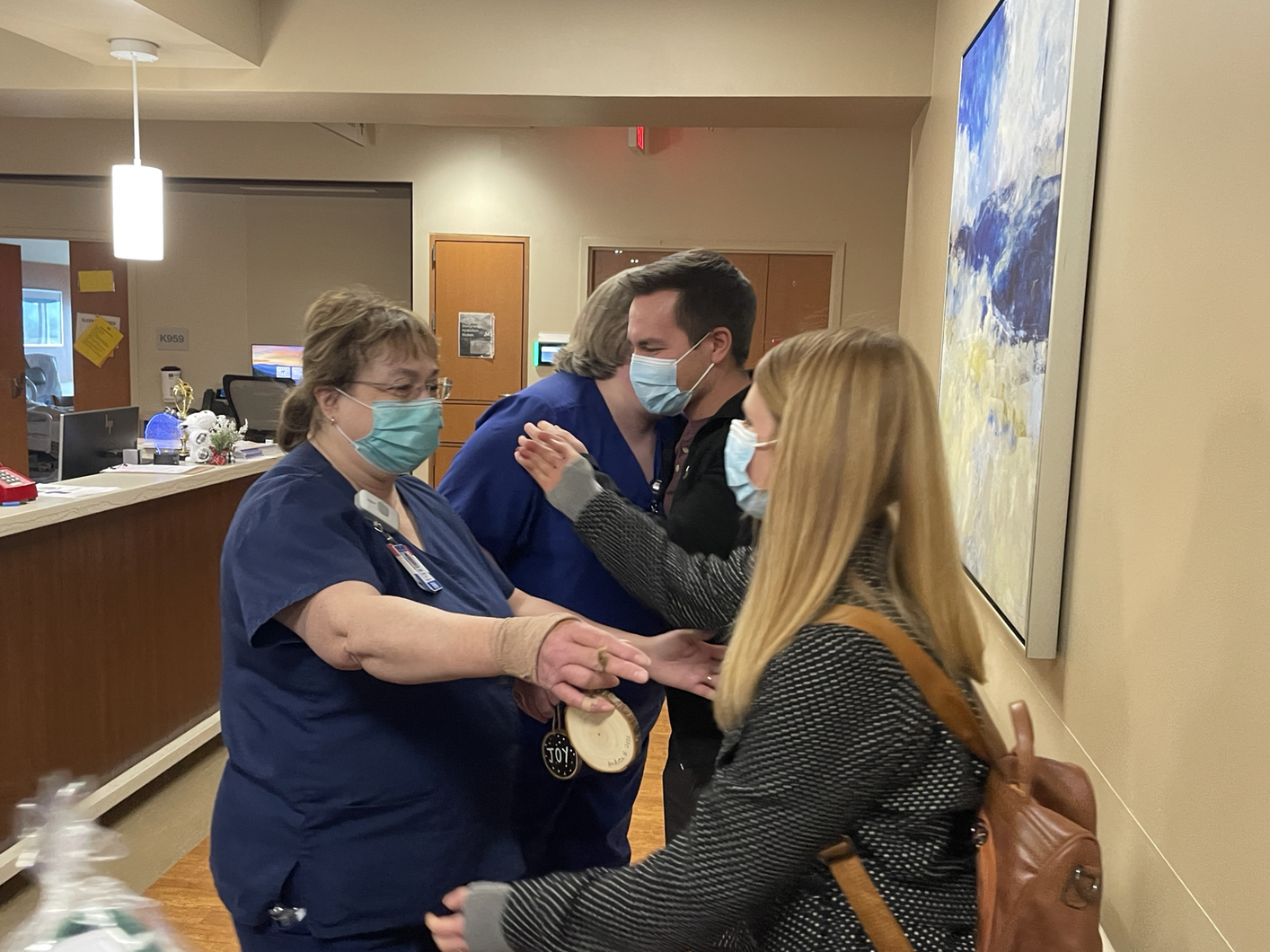 Christmas came early for some of the staff a Mission Hospital. A year ago, Andrea Bosio was not expecting to spend her 28th birthday in Mission Hospital recovering from a ruptured brain aneurysm. For her 29th birthday, however, she was thankful to plan her return.

Andrea and her husband Jeff brought gifts and treats to Mission Hospital December 20th as a way to celebrate her birthday and show her love to the staff who helped her through the difficult times.

A letter of gratitude was placed in each gift box she brought to the intensive care and step down units she was in during her stay. The boxes also included snacks and handmade ornaments for staff, and soft, grip-bottom socks, Chapstick and a message of hope for patients.

Andrea and Jeff, both from Franklin, were excited to have welcomed their second baby boy just two months before her health emergency.

“The boys were taking a nap so I went downstairs to spend some time on the elliptical. All of a sudden, I felt an intense rush of pain to the front of my head- there was nothing gradual about it, so I knew I needed help,” Andrea said.

In the process of calling for help, Andrea became so weak she began crawling up the stairs of her home. She also was having a difficult time speaking.

After being transported to Angel Medical Center, she was taken to Mission Hospital.

“Of all the uncertainty that surrounded this time for me last year, there was no denying how much I had to be thankful for. Big things, little things, all the things in between,” Andrea recalled in her letter. “Many of the nurses will be forever etched into my heart. I wish I could remember each name, but I so remember you.”

Andrea did nominate one of her nurses for the DAISY Award, which recognizes excellence in nursing, and that nurse was presented the DAISY in April 2022.

Andrea said of this nurse, “to lift my spirits, she took me for walks around the floor so I could get some fresh air. She took the time to do things for my care that made me feel more like her sister than just a patient. She washed my hair, gently combed through the knots and took the time to braid it.”

Andrea added that to these Mission team members, it was just another day at work, but to her, those days were some of the most significant of her entire life.

“May you know how valued you are, and never forget that miracles exist.”