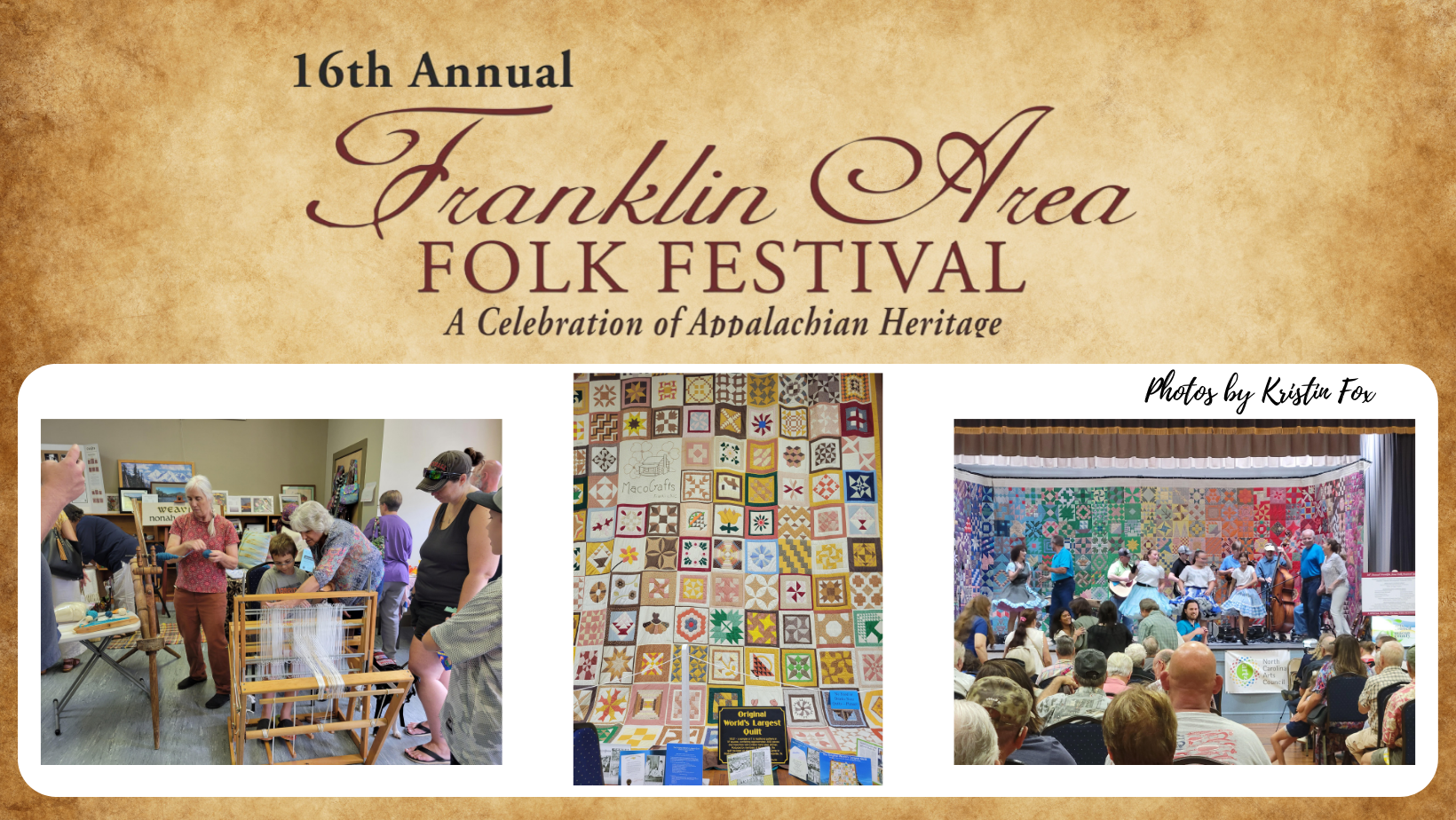 After a two-year absence, one of Franklin’s favorite festivals, the Franklin Area Folk Festival, returned this past weekend. An estimated 2,000 people visited the Cowee School Arts and Heritage Center for Saturday’s 16th annual festival. The festival, known as “A Celebration of Appalachian Heritage,” continues to be a favorite among locals, while also attracting visitors from North Carolina, South Carolina, Tennessee and Georgia.

Located in Cowee West’s Mill Historic District, the festival is a unique showcase demonstrating the everyday skills, crafts and music of our ancestors. The folk festival is held the third Saturday in August each year to help preserve and educate the community about the rich heritage of Franklin and Macon County.

“The festival gives people a chance to reminisce about how things used to be,” said Anne Hyder, Chairman of the Franklin Folk Festival. “It is mainly a heritage demonstrative event exhibiting traditional skills that you don’t always see everywhere.”

“We think if you don’t remember how things were in the past, it will affect how things go in the future,” added Hyder. “We want people to treasure and appreciate how things have been in the past and pass that down to future generations. We love that we have families of all ages recognizing and reminiscing about things about the past, which may be new to them.”

The festival featured several heritage demonstrators who are the heart and soul of the festival including rug making, chair weaving and pine needle baskets, blacksmithing, flint napping, woodworking/woodcarving, spinning, and quilting. Over 75 vendors were a part of the free festival celebrating all things Appalachian including the Civil War reenactors and camp.

An expanded kid’s program kept the youngsters busy throughout the entire day. On the field under the kid’s tent, the young crowd could try traditional activities such as weaving and churning butter as well as making a banjo and corn husks dolls. Traditional games such as egg & sack races and tug-of-war were available for children to enjoy.

Other activities for kids of all ages located throughout the festival grounds included Grandma’s wash day, corn shelling, milk cow challenge, pottery, and weaving. Children could have their face painted by Macon Faces & Henna and pick up a new book from the Read2Me booth.

Throughout the day, traditional mountain music, gospel, and bluegrass could be heard in the schoolyard on the outdoor stage, in the school gymnasium, and throughout the school. This year’s festival featured Kornbread Kreek, The Vagabounds, Frank Lee & Emolyn Liden, Rainbow’s End, Nikwasi Dulcimer Players, Lady & the Tramps, Susan Pepper, Wyatt Duvall, Richard Tichich, and the White Sisters.

Highlighting the importance of the Appalachian tradition of quilting, special quilts were on display including the famous Cabarras Quilt, The Celebrate America Quilt, and the original World’s Largest Quilt. The Cowee Quilters and Smokey Mountain Quilters demonstrated the art of quilt making.

The success of the event depends on many sponsors and individuals who support the festival each year. Sharing the same interests in preserving heritage and farming, Farm Bureau is a key supporter of the festival contributing time and financial support.

The annual Franklin Area Folk Festival is one of several events sponsored by the FHAMC, a non-profit 501(c) 3 organization, providing “living history” experiences preserving the heritage of Macon County for generations to come. Other FHAMC projects include the Women’s History Trail Project, 4th Grade Heritage Days at Cowee School, and special activities such as Cowee Christmas and Balsam Bee.