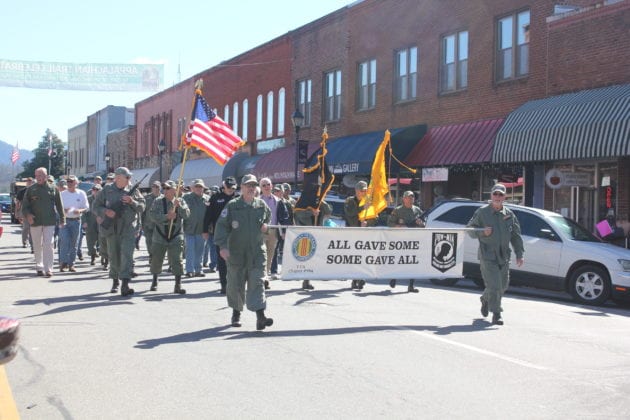 “Never again shall one generation of veterans abandon another”

The Vietnam Veterans of America Chapter 994, also known as the Nat Henry Chapter 994, will be hosting the annual Vietnam Veterans Day celebration this Saturday, March 26 beginning at 10:30 a.m. in Franklin. The parade will begin at the Franklin Town Hall and proceed up Main Street before finishing at the Town Gazebo.

The event program is scheduled to begin at 11 a.m. with Leigh Holbrooks, Director of Macon County Veterans Services, will be the featured speaker. In addition, The White Sisters will be performing special music and Bernie Coulson, will be presenting the VVA Chapter 994 Photo Project.

Vietnam Veterans Day commemorates the sacrifices of Vietnam veterans and their families and is part of a national effort to recognize the men and women who were denied a proper welcome upon returning home more than 40 years ago.

The Vietnam War Veterans Recognition Act, signed into law in 2017, designates March 29 of each year as National Vietnam War Veterans Day. March 29 was closed because on that day in 1973, the last combat troops were withdrawn from Vietnam and the last prisoners of war held in North Vietnam arrived on American soil. It is also the date President Nixon chose for the first Vietnam Veterans Day in 1974.

Locally, since 2009, the Macon County Vietnam Veterans have recognized their fellow Vietnam veterans and their families with the parade and ceremony, especially those who made the supreme sacrifice of giving their lives during the Vietnam conflict.

It is estimated that nearly 60,000 service people lost their lives, including the nearly 1,600 now considered missing in action. Approximately nine million actively served during the Vietnam War era and it is estimated that about seven million are still living today. White crosses representing and honoring the seventy-nine Maconians who gave their lives in the Vietnam War are always lined up in rows in front of the county courthouse during the annual celebration.