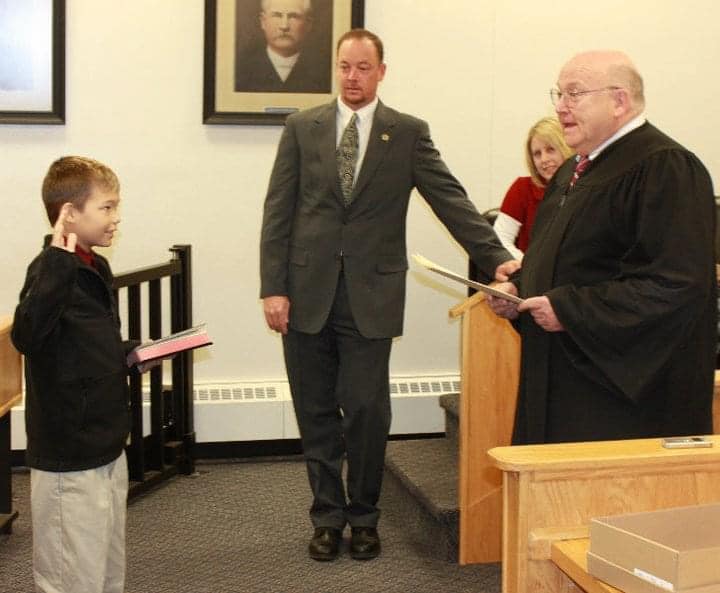 When officers with the Macon County Sheriff’s Office were sworn in on December 6, 2010, after Sheriff Robert Holland was re-elected, 11-year-old Gabe Bingham took his very first Oath of Office.

“Chances were slim that Gabe would live to see the day he would be old enough to become a deputy,” remember Sheriff Holland. “So with the help of another officer, we made him part of our Blue family in 2010.  Following my re-election, when the entire department was sworn in, we pinned a badge on Gabe and swore him in as the youngest deputy to serve in Macon County.”

Bingham’s swearing-in ceremony was symbolic and came just after a Make a Wish trip to Hawaii with his family. For as long as Bingham could remember he wanted to be a deputy, specifically a Macon County Sheriff’s Deputy, and after being diagnosed with Focal Segmental Glomerulosclerosis, a kidney disease, doctor’s didn’t expect him to live much longer than his 11th birthday.

FSGS is a rare disease that attacks the kidney’s filtering units (glomeruli) causing serious scarring which leads to permanent kidney damage and even failure. Not only was Bingham diagnosed with FSGS, according to his doctor, but his case was also the most severe he had ever treated.

Since 2010, the Macon County Sheriff’s Office has held a swearing-in ceremony every four years, in 2014 and 2018 and for everyone, Bingham as been right there alongside the rest of the department. It wasn’t until July 2, when he turned 21, that he realized he was actually going to be able to fulfill his lifelong dream.

Bingham was sworn in as an official deputy this week and today, on August 5, he began his career as a rookie deputy.

“It is more than I could have ever imagined,” Bingham said with a grin reaching from ear to ear. “It is s surreal for it to actually be happening.”

Bingham began dialysis in 2010 while waiting for a kidney transplant. Members of his church, Cowee Baptist Church, flooded the hospital with calls to have their members screened to see if they were a match to be able to donate a kidney to save young Gabe’s life. In 2013, a member of the church was found to be a match and she happily donated her kidney to the then 14-year-old Gabe.

Follow up testing after the transplant showed that Bingham’s disease returned, however this time it was less severe and has been manageable with experimental medications and drug trials. After Bingham graduated from Franklin High School he went on to Southwestern Community College where he obtained his Associate degree in Criminal Justice – all preparing for the day he turned 21 and was old enough to join the Sheriff’s Department.

Bingham spent his free time as a volunteer with the West Macon Fire Department and doing ride-alongs with the sheriff’s department, learning all he could about law enforcement. After graduating from SCC in 2017, Bingham made plans to attend Basic Law Enforcement Training at SCC, which he completed as the last step toward his journey of becoming a deputy.

Tonight Bingham put on his uniform to begin his first shift as a deputy in the department’s Field Training phase.

Bingham said he is excited to be part of the patrol division and plans to stay part of that unit for the time being.

“I really like patrol and the work that goes into it,” he said. “I also like investigations and could see myself growing and moving into that role someday.”

Bingham said that being an investigator one day with the department’s Special Victim’s Unit is his ultimate career goal.

Sheriff Holland wished Bingham well on his first day on the job.

“We are looking forward to seeing the kind of officer that Deputy Bingham grows into, said Holland. “He comes from a family of young public servants who love their community and is a welcomed addition to our law enforcement family. As I told him today, God Bless him and he’s got 29 years and 364 days to retirement!  Go Make a Difference! It’s going to be a tough profession to be in and it will take men and women with a true servant’s heart and God’s protection to make it to the end.”

If you want to support The Southern Scoop’s mission of providing quality, daily, up-to-date news and information, consider donating to the Patreon Account today by clicking HERE. There are also advertising opportunities available for businesses and organizations across Western North Carolina.