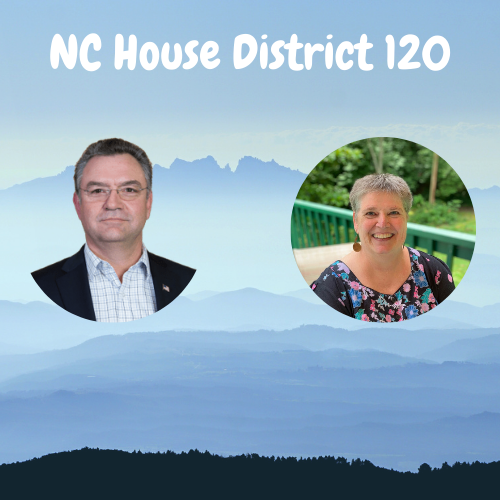 Macon County Republican Karl Gillespie and Cherokee County Democrat Susan Landis are both vying to represent North Carolina’s westernmost district – House District 120. The seat, which has been held by Kevin Corbin for the last two terms, is up for election this November as Corbin is seeking election in the North Carolina Senate.

Gillespie is a fifth-generation Maconian. He and his wife Janet have one son, Logan. Gillespie spent 17 years working on the road for Globe Communications, Inc. He started as a helper on a fiber splicing crew and was vice president of the company by the time he left in 1999. That same year, he founded National Communications, Inc., and has since grown the company into a regional provided of low voltage systems.

“I never started out to be an elected official,” said Gillespie. “I was appointed to be on the Macon County Planning Board and served on it for several years. Through being a public servant, I became familiar with the needs of the county and the projects that were on the table. When I was asked to run for County Commissioner, I decided to because I felt like I was up to speed on the needs of the citizens and would be able to continue to work toward accomplishing some of the very projects the planning board had been tasked to work on.  Since being elected as a commissioner for Macon County, I have taken the job of serving very seriously and learned a lot from it.  When Senator [Jim] Davis announced his retirement our current Representative Kevin Corbin decided to run for Senator Davis’s seat.  After conversations with several folks in the 120th House District, I decided that my experiences had prepared me to represent the citizens of the 120th district.”

Landis said that she is running for office to be a voice for the West.

“I’m running for office to have a part in the conversation about what is best for this area, politically,” said Landis. “I’m a blue dot in a sea of red, but I think it’s important for people to hear more than one side of things and to make informed decisions about who represents them best.”

Landis is originally from Chattanooga, Tenn. She and her husband moved to Murphy, N.C., 7 years ago when they retired. They have been married for 37 years and have three adult daughters who all work in science-related fields across the country.

Landis holds a B.A. and M.S. degree from the University of Tennessee at Chattanooga, both in psychology. She worked in the mental health field for about 10 years at a psychiatric hospital and then a psychiatric clinic. Then she spent 28 years working as a school psychologist for the local public school district. Landis worked mainly in special education helping to evaluate the needs of students.

Police reform is a major topic across the country and here in WNC. What is your stance on law enforcement and current discussions for reform and defunding police?

Gillespie: “These topics are both disheartening and disturbing.  I have spoken to several sheriffs and they are all open to making any necessary changes. Interestingly, most of these changes require additional funding.  We need to work with law enforcement at all levels to make sure they have adequate funding to provide the services our taxpayers deserve.”

Landis: “I wish that the term ‘defunding the police’ was not being used. I don’t actually know anyone who feels that police should not receive more pay, training and support. What I regret is that the police have become more militarized over time and often treat citizens as though they are enemies. I think outfitting police in military garb and weapons makes it hard to relate to them on a personal level. Their training has caused some of them to be less aware of, and less sensitive to the needs of the people. Having worked in the field of mental health, I have personally witnessed police treating mental health emergencies as criminal behavior to the detriment of the mentally ill person. Police have an incredibly hard but important job to do, but their training is essential to our safety and well being. Obviously, there are problems in their training or in the selection of recruits, so that people who should not be police are being given badges. Like many social problems, it is complex and the solutions will be complex but it’s important to try to get it right so that innocent people are not murdered at the hands of police.”

As an elected official, how would you improve educational opportunities for WNC?

Gillespie: “First, we must fund our K-12 schools at a level so our children can compete on a global playing field.   We need to create a pathway for technical training and admission to undergraduate studies.  Second, we must fund our community colleges as they provide the specialized training in the trade fields that we need.  I was fortunate to have been able to serve on the Board of Trustees for Southwestern Community College, this gave me an opportunity to see how community colleges change lives.  I look forward to working with Southwestern Community College and Tri-County Community College to ensure they have the tools they need.”

Landis: “Having spent decades working in public schools, and having attended school in many different places as a child, I think I can bring a lot to any discussion of education. I have a whole lot of opinions and insights into what changes need to be made in education but it boils down to this…money. There has never been one single day in the history of this country that the schools have had all the money they needed to do the job. Not even close. If teachers were paid the salaries of CEO’s, people would be running to colleges to become teachers. That has never happened. Just like with police, the vast majority of the thousands of teachers I have worked with over the years are hard-working, sincere, smart, educated professionals who would give anything in their power to help a child or teach that child. They just do not always have the tools or training. I remember going into a brand new school where they had a brand new computer lab full of brand new computers, but it was locked up because no one in the building was trained on what to do with those computers. Grant money had paid for hardware, but not training. So, money is a start, or at least we need to try it for a change.”

What is your stance on WNC’s current broadband issues and how would you address it?

Gillespie: “Like so many other rural communities, WNC suffers from the lack of affordable broadband, in some areas over 40% of the households do not have access to affordable broadband.  Currently, the USDA’s e-Connectivity program, North Carolina GREAT Grant, local county grants along with government/private partnerships are all working to enhance broadband.  The main issue with deploying fiber optic technologies in WNC is the cost of construction.  To make any significant impact will require a substantial financial commitment by the federal and state government.”

Landis: “Broadband is at the top of the issues I would like to address if elected to the legislature. Personally, I only have two options at my house for internet…both of them are terrible. I don’t even have cell phone service at my house. I can’t stream anything, zoom meetings freeze up constantly and I run out of my so-called “fast” gigs of internet every single month. For this lousy service, I pay a satellite company $147 per month, so I know first hand how frustrating it is to not have decent internet. It is one of the few things that could make me move out of these beautiful mountains. One step that the legislature could take is to change the law that prohibits local municipalities from creating and operating their own broadband systems. They can also allocate more money for this purpose. The GA recently allocated some money for this purpose, but it was a laughably small amount compared to what is needed, and it only went to a few counties. Legislation could be put into place to require any business offering broadband to make it available to everyone. That is what is missing now. I have decent wifi less than a mile from my house but no hope of ever getting it in my area. In the seven years, I’ve lived here, my options have not changed at all.”

What do you see as being the biggest issue facing WNC?

Gillespie: “Lack of affordable broadband, economic development/sustainable employment opportunities, healthcare are the biggest issues facing Western North Carolina,” said Gillespie. “Western North Carolina is a great place to live and an even better place to do business, but we have to provide our residents and business owners with the tools they need to be successful. Things like healthcare and access to broadband have to be improved if we want to stay competitive and keep moving our economy forward.”

Landis: “The biggest issue facing N.C. right now is probably the divide between the urban and rural areas. Urban areas such as the Triangle, Charlotte, Raleigh have needs that are very different from the needs in the rural areas. We need to ensure that some basic infrastructure is in place everywhere, such as broadband, but also in education, roads, water quality, media access, mail service, and training for public employees. I used to be on the board of our county social services. The staff had a terrible time getting all the required training because it was held so far away. It would require two days of travel to get to and from a place like Raleigh (360 miles away), which presented a hardship to the agency to be without employees for so long. Why the trainings were not offered virtually is probably due to the lack of funding and broadband access. It again hurts rural areas and costs rural areas more. During this pandemic, we literally have students sitting in parking lots trying to do their homework that requires broadband because up to 50% of the people in this area do not have it at home. Thank God for Bojangles and McDonald’s. They offer free internet.”

Anything else you would like for your voters to know.

Gillespie: “I love calling Western North Carolina my home. As a native, I grew up fishing, camping, rock hunting, riding the back roads, and climbing all over these mountains. I worked on the road for 17 years and as I traveled in and out of the country I came to realize how truly blessed I had been to grow up in this region. If elected, I will be its voice. I will represent it with integrity and enthusiasm. I am a small business owner and understand the issues a small business faces and will bring that experience with me. My family and I live on the family farm, where we raise registered black Angus cattle, being a farmer, I think I can represent the region with this knowledge and experience.”

Landis: “I am currently the Treasurer of the Cherokee County Democratic Party, the President of the Tri-county Democratic Women (Cherokee, Clay and Graham counties), as well as a candidate for NC House District 120. I am the delegate for this county in the Senior Tar Heel Legislature, which is a nonpartisan advocacy group that works to obtain funding for services for senior citizens across NC (programs such as Meals on Wheels and transportation). I am also one of the people who evaluate scholarship applications annually for the Ronald McDonald college scholarships for this region. And, in my spare time, I enjoy time on my porch with our two dogs, two cats, and lots of wild birds. My website is susanlandisnc.com.”