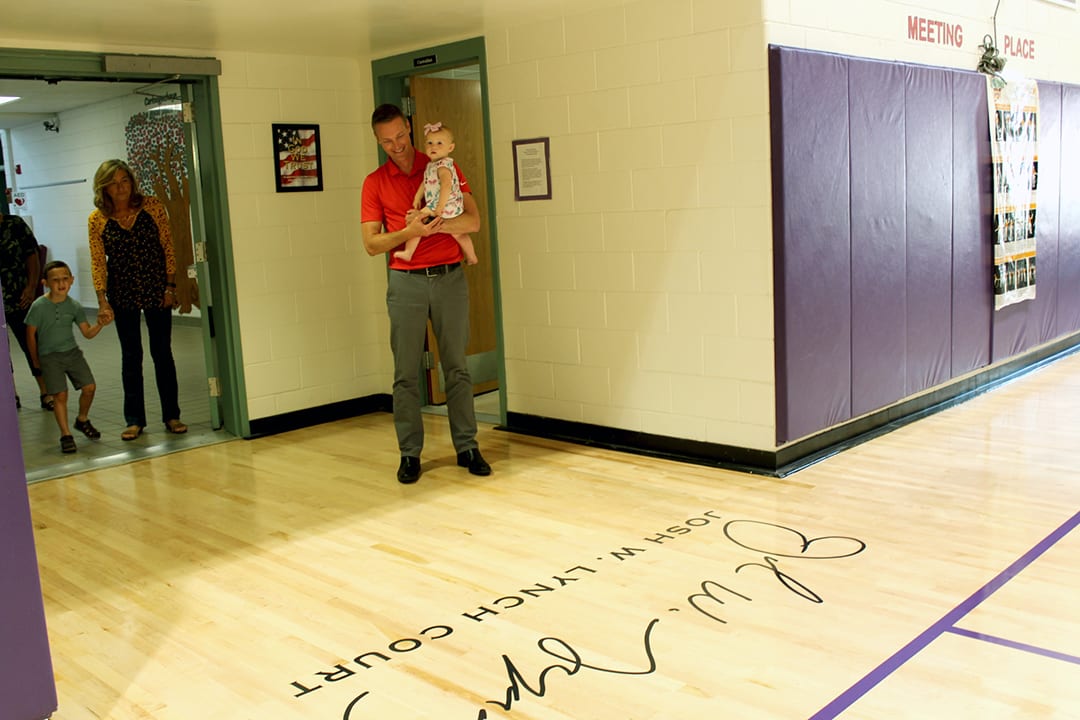 The Cartoogechaye PTO honored former Principal Josh Lynch this week, by including his name and signature along the gym floor, which was officially deemed the Josh Lynch Court.

“We have waited several years to refinish the gym floor due to water damage and termites,” said Aimee Trawick, president of the Cartoogechaye Parent Teachers Organization (PTO). “The coaches wanted new lines for their classes – like for four-square games – and PTO wanted to improve it by raising money for our school logo to be placed in the middle of the floor. When we heard Josh was leaving, we wanted to do something to honor him in a permanent way in the building for his wonderful legacy.”

Josh Lynch served as the principal of Cartoogechaye Elementary School for the last seven years. The Macon County Board of Education announced this Spring that he would be transitioning to the role of Curriculum Coordinator for the entire district, ending his tenure as principal.

The Macon County Board of Education had already allocated funds to refinish the gym floor, so adding a special tribute to Lynch was an easy decision.

Trawick credits Mike Arvey, who oversees maintenance of the elementary school for spearheading the project and getting all the final details in place.

The project took two weeks to sand the floor down to the original wood and finish painting and staining. On Monday, school staff unveiled the finished product, complete with the school’s logo in the center of the gym floor, new lines for physical education classes to play games such as four square, and his signature to memorialize Lynch’s impact on the school. The entire project cost $1,840.

The Lynch name won’t be entirely lost from Cartoogechaye. This coming school year, Lynch’s wife, Kristen Lynch will take over as principal.