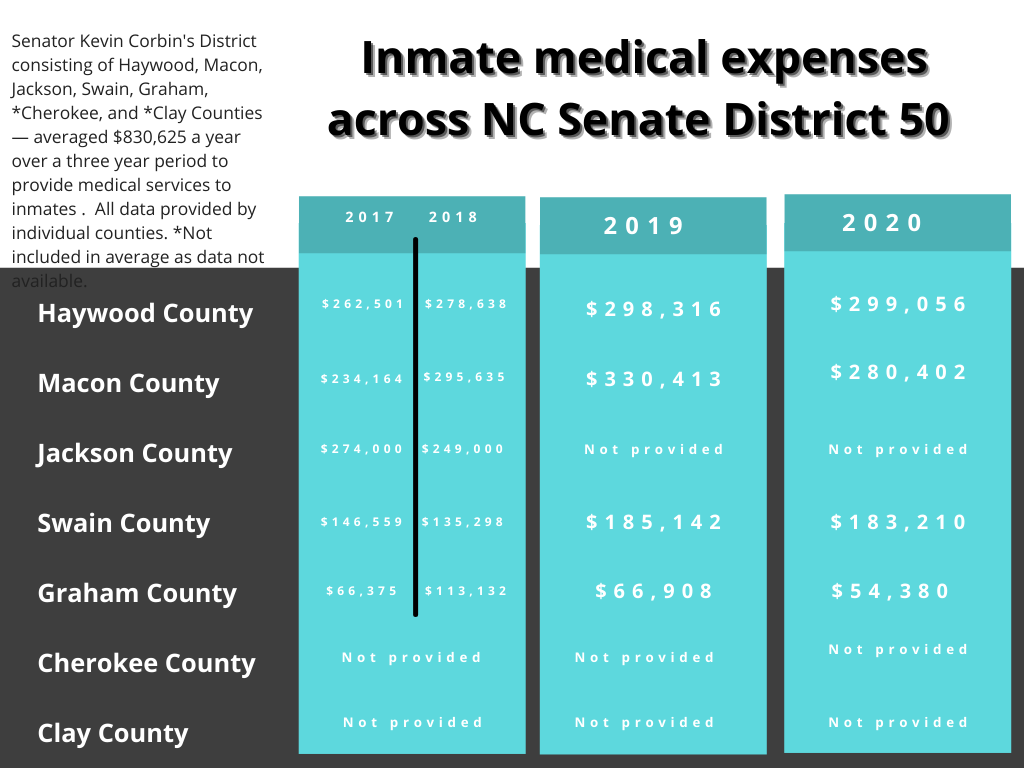 On average, counties in Western North Carolina spend just under a half a million dollars every year to provide medical care for inmates housed in county jails.

North Carolina general statute mandates that individual counties are responsible for providing healthcare to inmates and if that inmate doesn’t have health insurance, that medical bill gets sent to the county. County taxpayers foot the bill for inmate healthcare, a moving target for county budgets.

Since 2017, Macon County taxpayers have spent more than $1,140,000 — about $300k a year — for inmate healthcare expenses. After being responsible for an inmate’s medical expenses that exceed $50,000 a month for a portion of this year, Macon County is bracing to spend close to $f00,000 this year.

During a recent town hall event covering the economic impact of closing the healthcare coverage gap held at Southwestern Community College, Macon County Commissioner Ronnie Beale addressed the impact the uninsured have had on county taxpayers as it relates to paying for the healthcare costs for inmates — many of whom would be better served in mental health or substance abuse treatment facilities.

“From 2017 through 2020 we spent about $1.2 million on medical [care] for our inmates,” Beale said. “Prisons have become our treatment centers for mental health.”

Pregnant women require treatment before, during, and after delivery. And people on dialysis represent another big cost driver.

“It is not uncommon for us to get inmates with prior medical issues but once they are in our custody they become our responsibility,” said Macon County Sheriff Robert Holland. “It is also not uncommon for pregnant women who are “wanted” to try and turn themselves in custody just prior to giving birth in an attempt to keep from having medical expenses.”

Leaders in North Carolina are looking at options to close the health insurance coverage gap through Medicaid Expansion, which stands to save county governments a substantial amount on the cost of healthcare for inmates.

In North Carolina and nationally, county jail inmates tend to be older and sicker than the general population. Inmates who meet certain conditions such as a disability, pregnancy, or being older than sixty-five would qualify for state or federal Medicaid assistance when not in jail. But if they are held for more than a few days, their Medicaid coverage is terminated.

Federal and state inmates who have been convicted of crimes are eligible for Medicaid, but those awaiting trial some for as long as three years, lose their eligibility. If North Carolina were to expand Medicaid under the Affordable Care Act, many more inmates could qualify under a plan developed by the N.C. Association of County Commissioners and the state Division of Medical Assistance.

The State of North Carolina operates 57 prisons and provides medical, mental health, dental, and pharmacy services to inmates at a cost of $322 million annually, an $89 million increase from 10 years ago. The State spent $6,923 per inmate on healthcare in Fiscal Year 2014–15, which was more than 31 other states and 21% more than the national median of $5,720

By expanding the types of people who can qualify for Medicaid, expansion in NC would extend Medicaid access to 80 percent to 90 percent of state prisoners if it passes, according to the North Carolina Department of Public Safety — which would save the state an estimated $10 million a year.

North Carolina is one of only seven U.S. states that kicks people off of Medicaid when they go to prison or jail. The one exception is when an inmate is hospitalized for more than 24 hours. The DOC or county jails can apply for Medicaid funding to cover part of the cost if the inmate is eligible for the government health care plan.

By expanding Medicaid, states may be able to harness significant resources to address persistent criminal justice issues, including the opiate epidemic and the incarceration of people with severe mental illness who could more effectively be served in the community.

Medicaid expansion would also require the Department of Corrections to help counties get jail inmates back on Medicaid after their release — which could substantially reduce the cost associated with repeat offenders. Once an inmate is no longer incarcerated and enrolled in Medicaid, the inmate would have access to substance abuse treatment and mental health services outside of jail. Medicaid would be available to cover the cost of those programs and an individual continuing treatment upon release.

Of the approximately 750,000 people released from prisons in the U.S. annually, 40 percent of the men and 60 percent of the women released have mental health, substance abuse, or physical health problem, according to 2012 report from the National Governors Association that studied the potential impact of Medicaid expansion.

Further studies have shown that providing former prisoners with immediate access to healthcare upon release has a direct impact on reducing recidivism. A 2007, study, for example, of two counties in Washington and Florida linked ex-prisoners’ access to Medicaid with 16 percent drop in recidivism.