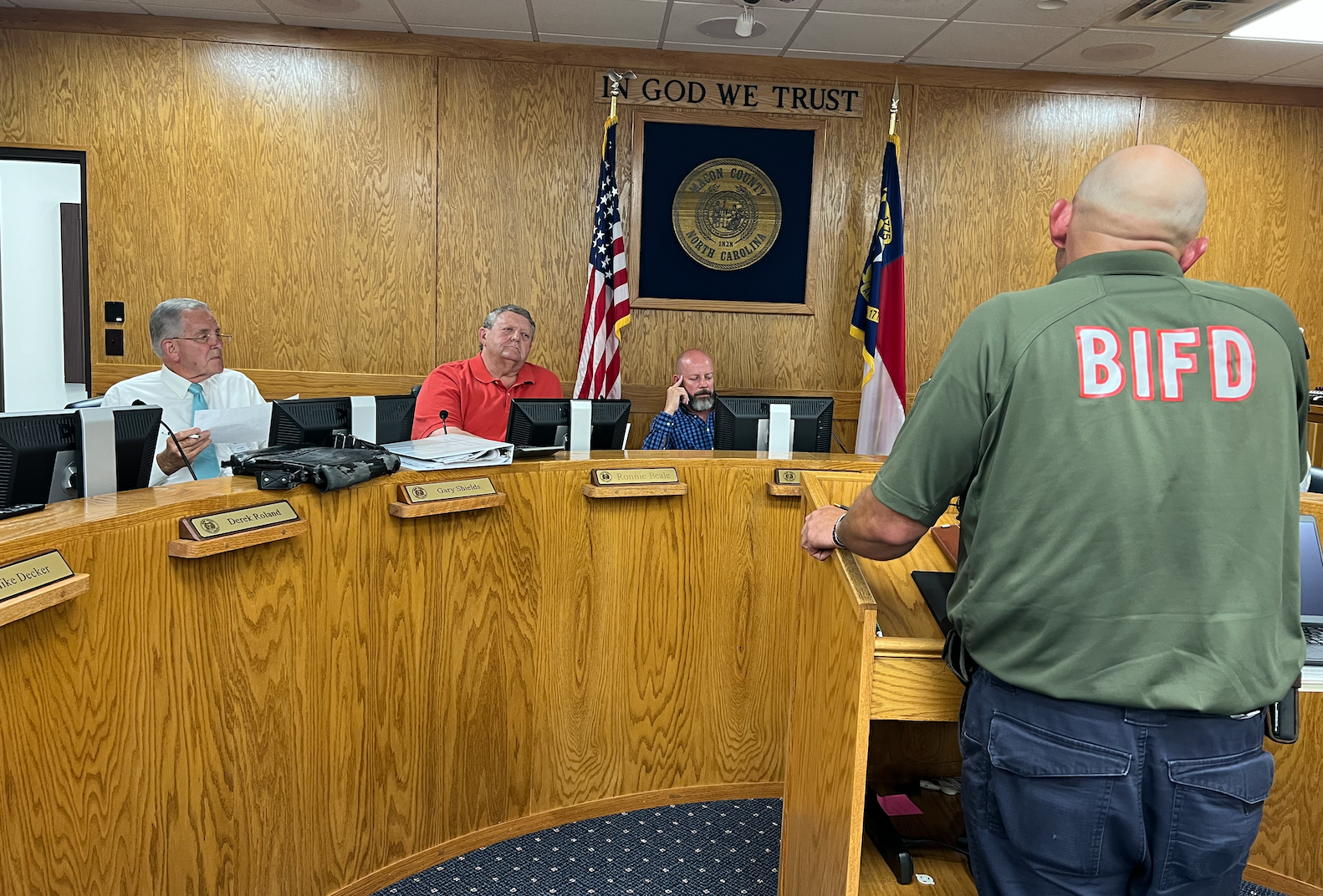 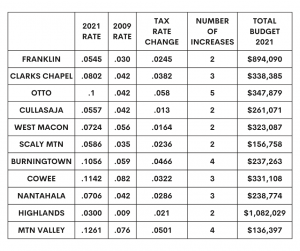 As part of the annual budget discussion for Macon County, local fire departments submit their own individual budgets. Each of the 11 fire districts in Macon County has its own respective fire tax rate and if a department has a budgetary need any given year, they must request a change to its fire tax rate during the budget process.

Addressing questions from Commissioner Paul Higdon regarding why four departments out of 11 are requesting tax rate increases and the other six are able to “make do” a representative with the Otto Fire Department explained that not every department requests increases each year. Prior to the increase for the building Otto made last fiscal year, the department had not received an increase since 2016.

Fire Departments in Macon County are primarily manned by volunteers, however, some departments have paid staff who handle the day-to-day operations — which requires departments to have paid staff. For fire districts such as Franklin, which are responsible for a much larger population area, several paid employees are needed to ensure adequate coverage and protection within a district. In addition to money for paid staff members of various departments, fire departments have a minimal payment that volunteers receive per call — on average about $15 for every call a volunteer responds to. Fire departments also need money for operational expenses such as electricity, rent or mortgage payments on their buildings, gas to operate the fire trucks, necessary equipment, and arguably the most expensive expenditure for a department, the actual trucks required to operate a department.

While community fire departments host fundraisers throughout the year to help cover the cost of operations, the majority of a department’s funding comes from the fire rate tax collected within each respective district. That’s a tax on real property items such as homes and vehicles.

In this fiscal year budget, the Franklin Fire District requested a tax rate from .0545 to .07 in order to generate an additional $252,694 annually. Franklin Fire and Rescue Chief Ben Ormand said the increase request is two-fold. Part of the increase would be used to fund three full-time firefighters and the other half to purchase new equipment. Prior to this year’s request, the Franklin Fire & Rescue Department’s tax rate had remained flat since 2017 — when it was increased from .0445 to .0545. Prior to 2017, the department had not received an increase since 2015 when it was increased from .03 to .0445. The department had been at the .3 tax rate since 2009.

To generate an additional $119,609 annually, the Burningtown-Iotla Fire Department requested an increase in the department’s tax rate from .1056 to .1596 during this budget cycle. Prior to this year, Burngintown had not received a tax increase since 2019 when it was increased to .1142 from .1103. Before that, the department’s tax rate was .0867, which it received in 2015 when it was increased from .069. Prior to that dating back to 2009, Burningtown had a tax rate of .059. Fire Chief Mike Shuler told commissioners the increase is needed this year for facility repairs to the department’s main station, built in the 1980s as well as to upgrade equipment and provide salaries to part-time employees.

To generate an additional $75,785 annually, Cullasaja Fire and Rescue is requesting an increase from .0557 to .0720. Cullasaja Fire & Rescue’s last tax rate increase was in 2019 when it was increased from .0537 to .0557. Cullasaja’s .0537 rate was established in 2015 after an increase from the department’s .042, which it had dating back to 2009. According to Jack Baird, Cullasaja Fire and Rescue needs the additional funding is needed to construct a new substation, purchase a new fire truck, and add a new paid firefighter position to the department while also increasing the stipend for paid firefighters.

To generate an additional $95,752 annually, Otto Fire and Rescue requested to increase the department’s tax rate from .1 to .1192. The Otto Fire & Rescue Department’s request was for the second half of the request made last fiscal year. Commissioners approved an increase last year, but it was only half of what the department requested in order to fund a new fire department. Last year’s increase brought Otto’s tax rate from .0684 to .1. Otto received the .0684 tax rate in 2019 — an increase from the .0650 tax rate the department had from 2016 through 2018. The Otto tax rate was .049 in 2013 and 2014 and according to county records was .042 dating back to 2009.

The four departments requesting an increase for the 2022-2023 fiscal year plead their case for their respective tax increases on Tuesday, June 7 during a budget work session with the Macon County Board of Commissioners.

Speaking to Chief Shuler with the Burningtown-Iotla Fire Department, which was the first of the four departments to present to the board, Commissioner Paul Higdon, who lives within the Burngingtown District said that he would be voting against all four tax increase requests based on the principle that he doesn’t support increasing taxes in general.

“I can’t personally, and I say this probably every year, I just can’t support tax increases for anything,” said Commissioner Higdon. “It is time for us to buckle down. I think our role is to lead the direction of publicly funded agencies and that is to learn to live with what you got.”

Commissioner Josh Young and Commissioner Ronnie Beale noted that the increase Burningtown was requesting would equate to about a 30 percent increase, and considering the economic climate post-covid19, neither commissioners were comfortable with approving the initial request from Burningtown. Commissioner Ronnie Beale motioned to award the fire department half of their request — however, his motion failed to pass. The Board of Commissioners then voted to provide a one-cent tax increase, which would provide an additional 22,152 per year for the department’s operating budget and increase the department’s tax rate to .1156. On a $300,000 house that would mean an additional $35 per year in fire taxes. The one-cent tax increase proposal was preliminarily approved by a vote 3-2 with Commissioners Young and Higdon voting against it. The public has an opportunity to weigh in on the proposed tax increase for fire taxes as well as the rest of the budget on Tuesday, June 14 at 6 p.m. in the Macon County Board of Commissioners’ board room.

Commissioner Higdon praised the Cullasaja Fire & Rescue Squad for their budget numbers, referencing their cost per call and low tax rate, and assured them while he would not be voting to give them their requested increase, he did appreciate their work. Cullasaja’s increase request will provide an additional $75,785 a year which would be around $57 for a $350,000 home. Commissioner Jim Tate said to be consistent with the stance he took on the Burningtown Fire Department request, he would like to see increases kept to a minimum. According to Macon County Finance Director Lori Hall, a penny increase for Cullasaja would be an additional $46,494 per year. The board approved Cullasaja Fire & Rescue’s full increase request by a vote of 3-2 with Commissioners Jim Tate and Paul Higdon voting against it.

Commissioner Josh Young noted that he lives within the Otto Fire District and appreciates the work they have done, which includes responding to multiple fire calls on his property. Commissioner Gary Shields noted that Otto Fire and Rescue’s tax rate increase was largely due to the need for a new building. While the new building would better serve the Otto Fire District, Commissioner Shields noted that it is also essential to house equipment from broadband providers that are currently partnering with the county to expand broadband services to Otto residents. That project is currently underway and the county has allocated over $500,000 for it, however, according to Commissioner Shields, without a new fire department to house the needed equipment, the project would not be possible and those funds would be wasted.

Commissioners voted on proposed tax increases for the fire departments last week — however, the public is invited to speak about those increases Tuesday night at 6 p.m. at the Macon County Courthouse inside the commissioners’ boardroom, prior to Commissioners taking a final vote on this year’s budget.