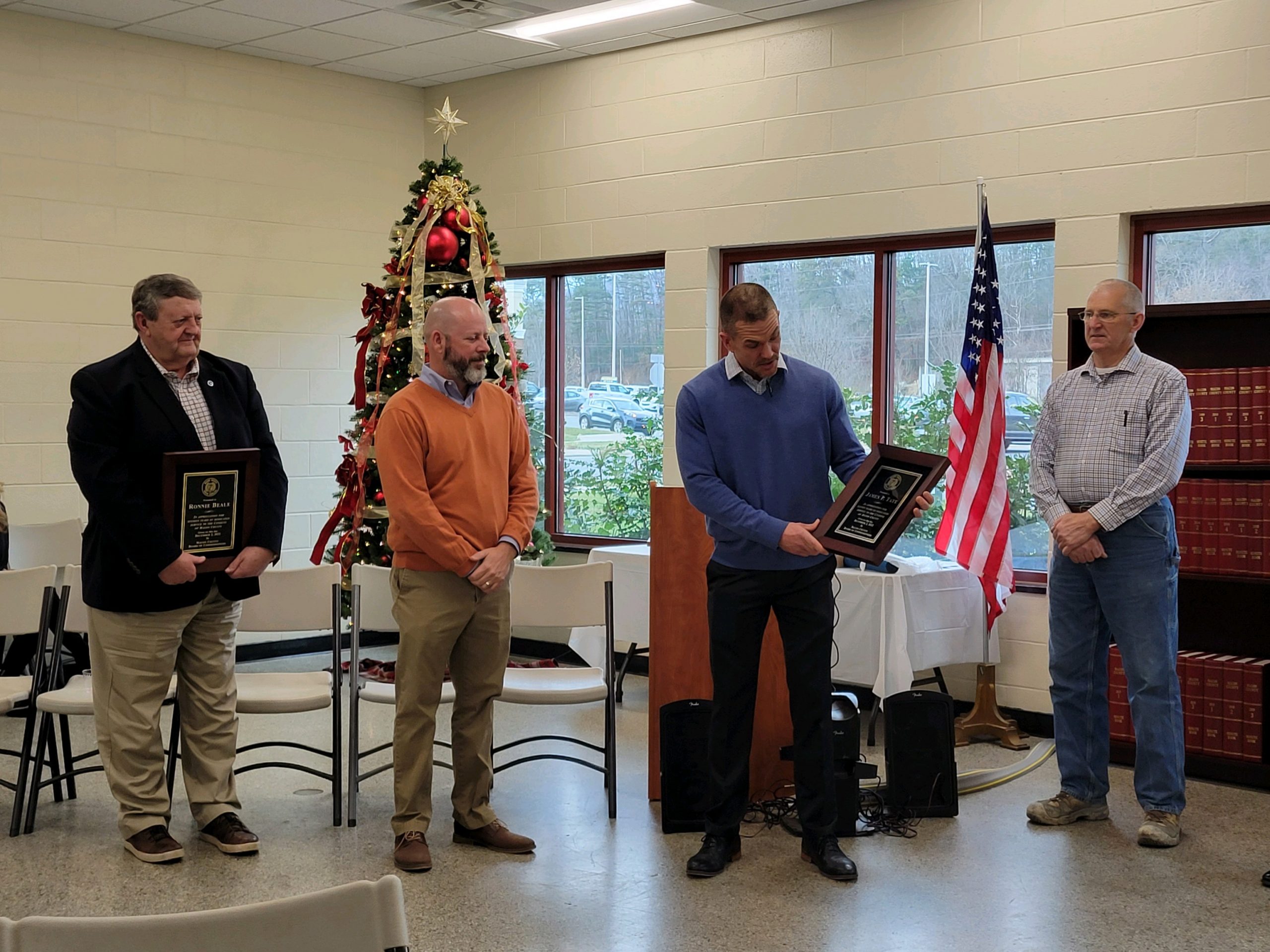 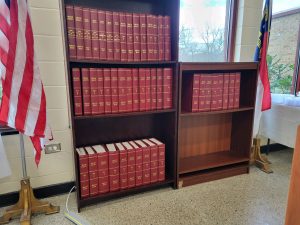 Forty-eight books stood as the backdrop for the recognition of Beale and Tate. These books representing the official minutes of record of the Macon County government from January 2006 through November 2022 contain an account of Beale’s 16 years in public office and 31 of those same books provide therecollection of Jim Tate’s 10 years of service from January 2012 to November 2022. 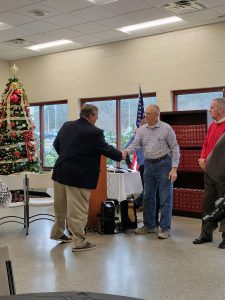 Anne Hyder, representing the Macon County Democratic Women, recognized Beale and his service. To honor his dedicated service to Macon County, Hyder presented him a check with a donation in his honor to No Wrong Door, a program he started that supports individuals and families struggling with substance use disorder and mental health challenges. 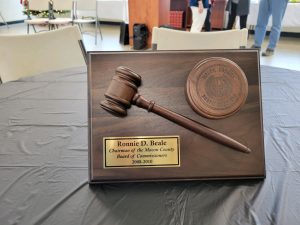 Macon County Manager Derek Roland, who was hired during Beale and Tate’s tenure, delivered the opening remarks for the celebration.

“These two men are special individuals as everyone in this room can attest to,” said Roland. “They both have done so much for Macon County it is difficult to fit all of that in; not only what they have done for Macon County but also across the state of North Carolina and our region. No matter what you do it could never be enough to thank these two men for the leadership they have shown to Macon County during their time in office.”

“’No monument has ever been erected in honor of a 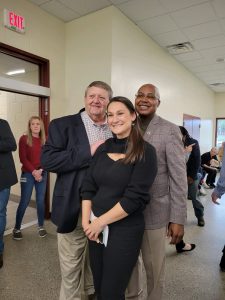 critic; let your time in public office stand for something more than a debate.’ Ronnie Beale told me that when I first started as county manager, and that quote has stuck with me ever since then,” he added. “As far as Macon County is concerned the rightful owners of this quote are sitting here before you today.”

“Written on thousands of pages in these series of these bookswill forever be the official story of Macon County for this 16-year time period,” said Roland. “As you look at these books and you begin reading the pages, the pages turn into years, the years turn into decades, you quickly notice the times change. You see times of economic recession; you see this board dealing with economic prosperity. You see the issues change such as fundingfor education and employee compensation come to the forefront. You see the board struggle as they deal with the aftermath of natural disasters and economic uncertainty, most recently the pandemic. The issues change during this 16-year-old story. All the main characters change sometime during these 16 years with the exception of one. With all these changes going on, I am amazed that one theme has always been consistent, that theme never changed over those years, and that theme is progress.”

“Progress is the advancement toward a better more 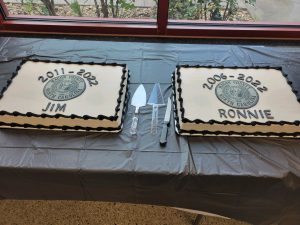 complete,more modern condition,” said Roland. “Today Macon County has without question advanced to a better, more complete placebecause of these two men. In reading the story found in these minutes, there seems to be no area their leadership hasn’t touched.”

Roland highlighted some of the accomplishments of the commissioners during the tenure of Beale and Tate:

• In 2006, $62 million was invested into our county’s most valuable assets, our children, in the form of capitalinfrastructure in the Macon County school system with the building of new infrastructure and the renovation of existing infrastructure.
• $13 million was spent to expand and improve the Macon County airport the hub of economic development in Macon County which continues to play a vital role in our economic growth.
• Funding for law enforcement increased 90 percent.
• Funding for EMS increased 102 percent.
• Built new recreation parks and renovated existing recreation buildings and facilities; made other numerousimprovements totaling millions of dollars all of which have gone to improving the lives of Maconians.
• Despite the financial investment and challenges, the county has maintained a solid picture of financial successthroughout this time period.
• From 2002 to 2022, the fund balance in Macon County’s general fund, the county’s savings account, has increased $16.7 million dollars.
• Much of debt of millions and millions of school projectsduring this time period have been paid off with 22 percentor $10 million paid off in the last 10 years alone.
• In the last five years alone, following multiple pay studies,the average salary of Macon County employees increased by 30 percent improving the quality of their lives and their families.

“All this was accomplished while maintaining the third lowest tax rate in the state of North Carolina,” added Roland. “During this time as the leaders of this organization you were the captainof this ship. You have always held those responsible for keeping the boat afloat, the county employees, in the highest regard.Throughout the history of the story contained in these 48 books you have kept the boat afloat. One would have to look long and hard to find an area of Macon County that your leadership has not touched. The love, compassion and dignity that each of you have led this organization with has touched everyone this room, in Macon County and thousands more across the state and nation. You should be proud you have advanced Macon County citizens and employees toward a better, more complete place over your years of dedicated service.”

Beale served as president of the North Carolina Association of County Commissioners (NCACC) from 2014-2015. He was one of two Macon County commissioners to ever hold this position.During his tenure as president of the NCACC, Beale hosted the NCACC Board of Directors meeting in 2015. Representatives from all 100 counties in North Carolina traveled to Franklin for the meeting.

“On behalf of the NCACC, Board of Directors, and the 100 counites of North Carolina we thank you both for your public service specifically your service to the people of Macon County,” said Leonard. “Being an elected official is tough joband being a commissioner is extra challenging. It is a 24/7 job, and you are always on. You don’t do this job because you care about fame or glory, but you do it because you care, you do it because you want to make a difference.”

“On a personal note, as NCACC past president Commissioner Ronnie Beale has given so much of himself to this association,”added Leonard. “He has been a champion and advocate for building bridges across all divides from mental health and human services. He has made an impact here in Macon County, he has made a positive mark across this state.”

“He has friends from all walks of life from Chatham to Cherokee, from Stanly to Stokes and everywhere in between;Because of Ronnie they all know where Macon County is, and they know it takes two sets of tires to get there. They know thatNorth Carolina continues west of Asheville. And they know there is a friend in Macon County who would do anything for them.”