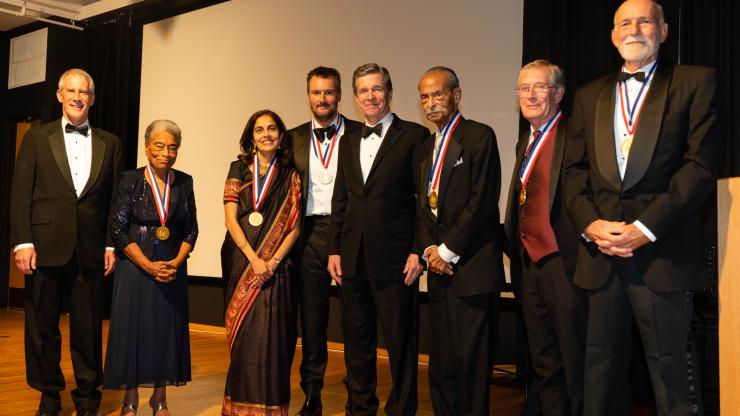 NC Native Eric Church was among six distinguished North Carolinians who were presented the North Carolina Award, the state’s highest honor, by Governor Roy Cooper during a Nov. 15 ceremony at the North Carolina Museum of Art. The award recognizes significant lifetime achievements in the areas of fine arts, literature, public service and science.

Established by the General Assembly in 1961, the first medals for the North Carolina Award were given in 1964. Since then, more than 250 notable men and women have been honored by the state of North Carolina. Past recipients include William Friday, Romare Bearden, James Taylor, Gertrude Elion, John Hope Franklin, David Brinkley, Maya Angelou, Billy Graham and Branford Marsalis.

Eric Church was born in Granite Falls, N.C., where his musical journey began at the age of 13 when he started writing songs and taught himself how to play the guitar. He earned a degree in marketing from Appalachian State University before moving to Nashville to pursue a music career.

A multi-ACM and CMA Award winner, including the 2020 award for CMA Entertainer of the Year, Church has also earned numerous GRAMMY nominations while amassing a passionate fanbase around the globe known as the Church Choir. In 2013, Church and his wife Katherine founded the Chief Cares Fund, a charitable giving organization that provides aid to those in need, in both the U.S. and around the world.

Details of the 2022 Award Winners:

Eva M. Clayton, the first African American woman to represent North Carolina in Congress, was also the state’s first Black representative since 1901 when she took office in the closing months of the 102nd Congress in 1992. Clayton, a staunch defender of rural and agricultural interests, revived the Rural Caucus along with Missouri Republican Jo Ann Emerson. They rallied more than 100 House members who pledged to continue federal aid to farmers, create new rural jobs, and expand technology initiatives. After retiring from Congress in January 2003, Clayton spent three years in Rome, Italy, as Assistant Director-General of the Food Agriculture Organization (FAO) of the United Nations. There, she facilitated the establishment of 24 National Alliances to reduce hunger, malnutrition and poverty in countries around the world.

Dr. Priya S. Kishnani followed a path into medicine first blazed by her mother, a pediatrician in India. She has treated patients and conducted groundbreaking basic and clinical research at Duke University School of Medicine for close to 30 years. Currently, Kishnani is the Chen Family Distinguished Professor of Pediatrics and the chief of the Division of Medical Genetics. Kishnani’s work applies basic science discoveries to clinical trials and pioneering approval of new therapies. Her innovative contributions translate laboratory science into treatment for people with lysosomal storage disorders (LSDs), glycogen storage diseases (GSDs), Down syndrome and other rare inherited disorders.

H. M. “Mickey” Michaux Jr. has spent more than 50 years as an activist, businessman and politician. He served in the N.C. House of Representatives from 1973-77 and later from 1983-2019. His time in the state House made him the longest serving member of the body. In 2020, at age 89, he was appointed to temporarily fill a seat in the N.C. Senate. Michaux was instrumental in preparing multiple state budgets as senior House Appropriations Committee chair and held numerous leadership positions in the House. Michaux was appointed in 1977 to serve as a U.S. attorney, becoming the first African American to serve in that role in the South since Reconstruction.

Dr. Stanley R. Riggs began his work as a marine geologist in the 1960s during a time when few people recognized the importance of climate change research. Riggs started working at East Carolina University in 1967 and spent 33 years teaching geology and tracking change within North Carolina’s coastal system. He was one of five scientists ECU recruited for its geology department to kickstart the university’s new geology and marine science program. He has published several books on coastal dynamics and climate change, including “Drowning the North Carolina Coast” and “The Battle for North Carolina’s Coast.”

David Zucchino, contributing writer for The New York Times and winner of the 2021 Pulitzer Prize for his book, “Wilmington’s Lie: The Murderous Coup of 1898 and the Rise of White Supremacy,” has covered wars and civil conflicts in more than three dozen countries. Zucchino began his journalism career as a general assignment reporter at the Raleigh News and Observer. He then worked for 20 years at The Philadelphia Inquirer as the bureau chief in Beirut, Lebanon; Nairobi, Kenya; and Johannesburg, South Africa and worked as a foreign and national correspondent for the Los Angeles Times from 2001 to 2016, focusing on Afghanistan, Iraq and Libya. He is the author of “Thunder Run: The Armored Strike to Capture Baghdad” and “Myth of the Welfare Queen.”