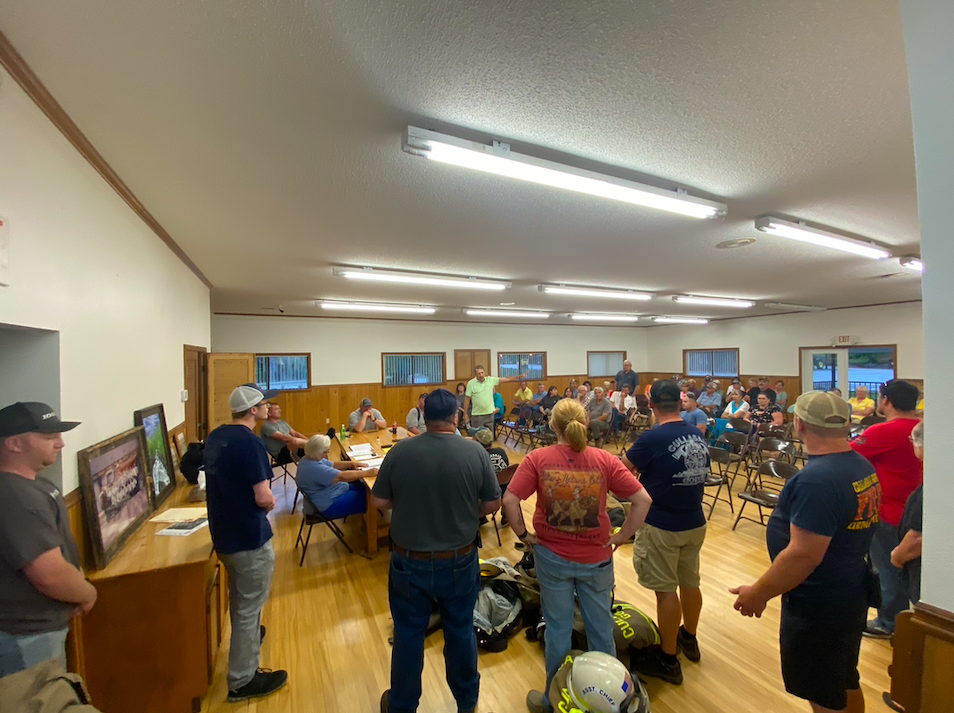 After months of internal disputes, Cullasaja Fire & Rescue held a meeting of the fire department association Thursday night which resulted in policy changes that prevented firefighters who do not live within the Cullasaja Fire Department from volunteering on the department.

Over the years, volunteer fire departments have struggled to meet roster requirements due to a decline in individuals signing up to volunteer. To address this, it has become standard practice for individuals who do not live within a specific fire district to volunteer with neighboring departments, which was the case at Cullasaja Fire & Rescue until Thursday night.

Because there are two sides to this situation and we are still working to collect as much information as possible, here is a timeline of what we currently can confirm.

Around 5 p.m on Thursday afternoon I (Brittney Lofthouse) was contacted and informed that two groups within the Cullasaja Fire Department were in disagreement about how to move forward with department leadership and the issue was going to be discussed during the fire department association meeting at 7 p.m. on Thursday. I made plans to attend.

Thursday’s meeting was advertised in the Franklin Press as an open meeting, as allegedly required by the department’s bylaws. Please note, that I state “allegedly” because, despite multiple attempts, I have not been provided a copy of the bylaws. I was informed by Interim Fire Chief Bobby Henry that my request to have a copy of the bylaws was made to the board and it would be up to them whether or not I would be allowed a copy. I have since learned on the advice of outgoing Chairman Jack Baird, I would need to request the bylaws through legal means. As of 7 p.m. on Friday, July 2nd, I have not received a copy to verify anything. I have also learned that many long-serving volunteers within the department have requested the bylaws and have not been granted access to them.

The meeting at Cullasaja Fire Department began at 7:30 p.m. Board Chairman Jack Baird called the meeting to order. Baird noted when calling the meeting to order that Thursday night was the first time during his 5 or 6 years as Chairman that a fire department association meeting had enough members of the community present for a quorum, meaning there were enough people present to vote on businesses or changes to the department. Again — due to not being granted access to the bylaws at the time this article was published, I have not been able to verify those procedures.

As soon as Baird called the public meeting to order, a gentleman in the audience made a motion to close the meeting to any member of the public that did not reside within the Cullasaja Fire Department. Baird then explained to the crowd that according to the association’s bylaws, business being discussed that would be voted on could be held during a closed meeting where only property owners of the Cullasaja Fire District could be present and be allowed to vote.

I initially left the meeting at that point to gather more information about the situation because, at that point, I knew very little of what was occurring.

The ranking members of a volunteer fire department are elected and voted on by the volunteer firefighters within the department. During a recent internal election, the firefighters voted to elect Tubby Zachary as the next Chief of Cullasaja Fire & Rescue. While Zachary does not own property within the Cullasaja Fire District, he and his wife reside across the road from the fire department for more than half the year, specifically in the months with higher call volumes, to provide a better response time for calls.

About half an hour into the closed meeting, the individuals who were forced to leave at the beginning of the meeting decided that based on the conversation about them occurring during the closed meeting and the attempt to circumvent the newly elected department leaders, entered the closed meeting and placed their fire department gear on the floor. *At that point, Baird asked for law enforcement, who were already on scene.  The volunteer firefighters were informed again that the meeting was closed and they were not allowed to speak. At that point, the members left their belongings and exited the meeting.

After consulting with my own legal counsel regarding the meeting being held close to the media, I elected to stay. I was not asked to leave the meeting although Interim Fire Chief Bobby Henry made Baird aware that the “media” was now present.

While I was in attendance, Henry spoke to community members to inform them that the Cullasaja Fire Department exists to serve the community therefore the operations of the fire department is ultimately up to them. Henry also noted that the individuals on the fire department who had just turned in their gear would allegedly check into the fire department as if they responded to calls — which means they would be credited with the $15 provided to volunteers for answering a call — however, those members never actually responded to calls. Henry did not provide any evidence to the claim nor provided the members he was referring to with an opportunity to address the claim.

Other concerns regarding the members who lived outside of the district were likely discussed during the beginning of the meeting, however, because I was not in attendance, I was not made aware of those issues.

Henry then informed the meeting that the county fire board responsible for overseeing volunteer fire departments were prepared to conduct an inspection on Tuesday to determine if the Cullasaja Fire Department could continue operating with the number of members on the board at that time. The Tuesday inspection was already anticipated prior to Thursday night’s meeting. County leaders had already been made aware that it was likely after Thursday night’s meeting, there would be fewer active firefighters on the roster. It was planned and organized prior to the meeting ever being held.

Baird told community members in attendance that if they wanted to ensure the department was in compliance with the 14 member requirement, they should consider filling out an application to join the department. He then informed them that it did not matter if they had the training or were able to answer calls, but rather having 14 names on the active roster was the main focus at that point.

A motion was then made by a member of the group to change the department policy to no longer allow volunteer firefighters to join the department if they do not reside within the Cullasaja Fire District. The motion passed with 43 votes in favor of the change — however once again there was no verification regarding the residency or property ownership of those who voted.

On a motion made by Melissa Henry, Bobby Henry’s wife, Bobby Henry was then appointed interim chief of the fire department due to Zachary no longer being eligible for the post he was elected to since he resided within the fire district but did not own property.

Zachary raised the question as to the validity of Henry being able to serve as Interim Chief of the Department because he does not own the home in which he lives. However, Henry stated that he did own other property and had intentions to build a home. When Zachary posed the question addressing Henry’s property ownership, Henry ordered Zachary and other members of the department removed from the premises by law enforcement. I requested documentation of that property ownership from Henry and although he informed me he would provide me with it, as of 7:30 Friday night, I have not received it, therefore I am not able to verify if Henry is a property owner and eligible to serve as chief or on the fire department at all — or if his wife is a property owner. If his wife does not own property within the district, she would not have been eligible to make a motion to appoint Henry as chief or vote on it.

According to Cabe, despite more than a dozen officers resigning from the fire department Thursday night, and even more being removed from the active roster due to the new residency requirement, residents of Cullasaja can expect the same fire coverage and effective response times. Cabe noted that volunteer fire departments are often dispatched with mutual aid with neighboring departments, therefore additional fire departments such as Franklin Fire or Clarks Chapel would respond to the same calls as Cullasaja to ensure coverage of the community.

*Clarification: A previous version of this article stated that Baird asked for law enforcement after members of the fire department entered the meeting and placed their gear on the floor. We have since been made aware by David Dabney, who attended the meeting last Thursday, that Baird called for law enforcement AFTER Dabney requested he do so twice.