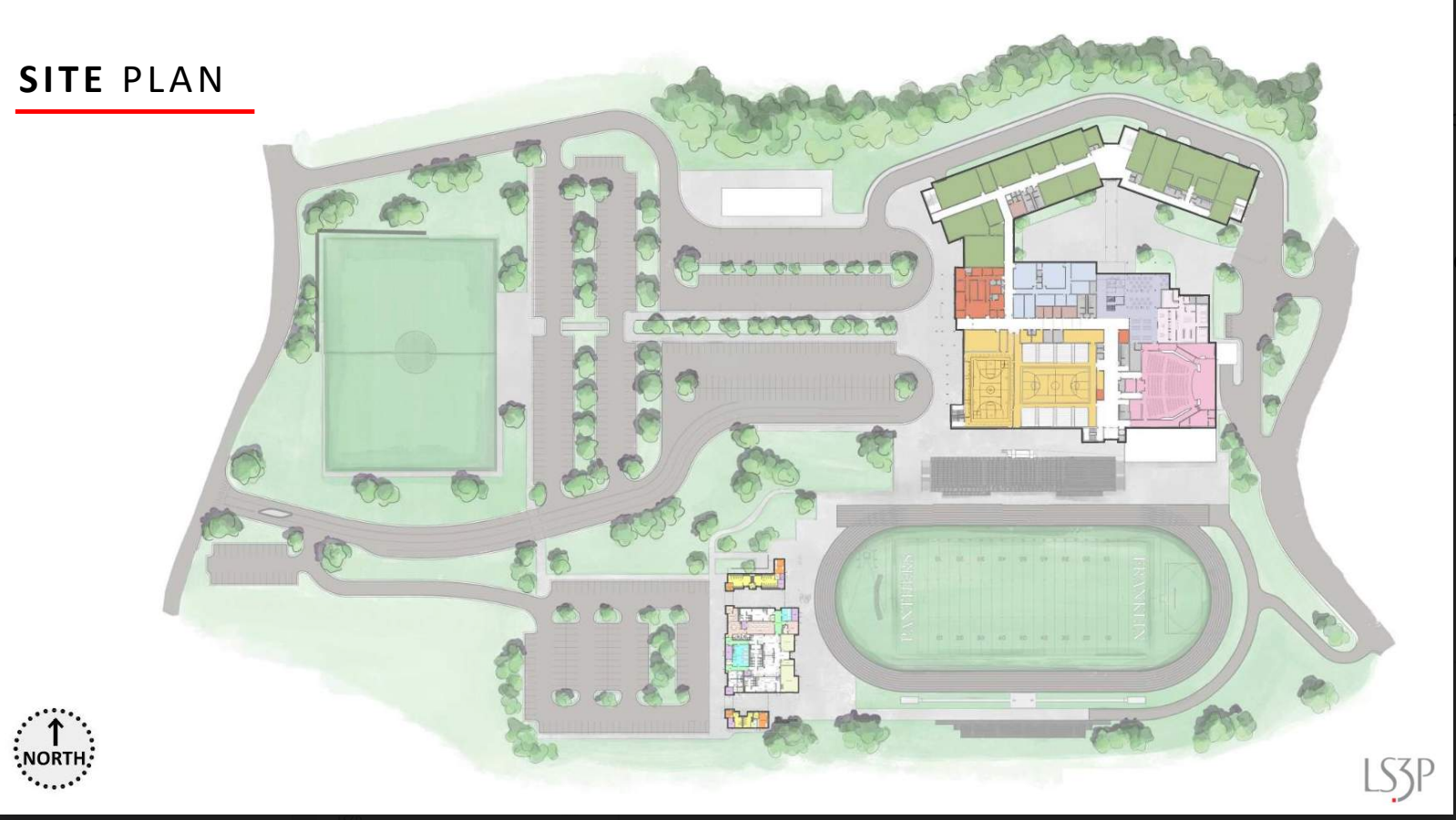 The Macon County Board of Commissioners voted Tuesday night unanimously to authorize LS3P, the architectural firm hired to design a new Franklin High School facility, to submit the Schematic Design Package for Franklin High School and Design Development for the Stadium local and state review agencies.

Chief Executive Officer of LS3P, Paul Boney lead the presentation, which laid out the plans of rate three-story facility that is expected to be 80,000 square feet larger than the existing campus.

The price tag for the project is $118,420,233— however that includes construction contingency and cost escalation of over $17 million, to address unpredictable building costs and inflation of today. The actual price tag of the building based on present-day value would be $73,603,998.

“What this is about is saving money for the county so your taxes don’t go up to run these buildings,” said Boney. “These (the current school facilities) buildings right here take a lot of energy. They have a lot of doors and are made up of energy-deficient systems.”

Boney outlined that when creating the new facility designs, the district’s goals of economic development, developing a safe & inviting space for students and faculty, creating a center of the community, developing energy savings, and strengthening community pride were all heavily considered.

The three-level design for the new facility places the auditorium, kitchen, cafeteria, gym, auxiliary gym, administrative offices, recourse/E.C. classes and the CTE classes on the first level. The horseshoe design includes a courtyard between the CTE section and the remainder of the first floor to offer green space for students. The agriculture classes are located in the corner of the CTE building to allow easy access to the school’s greenhouse.

Boney also explained that the first level of the school is unique as it sits just a short distance higher than the stadium entrance and physical education courses. 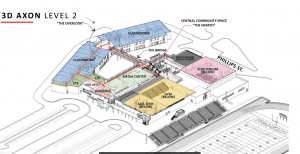 The second level of the proposed design elevates the portion of the building that includes the CTE building, Resource.E.C. and administrative offices. The second floor above those section will feature the media center, guidance, additional CTE classrooms and additional academic classrooms. To connect the second level of the design to the media center over the courtyard, a foot bridge will be constructed. 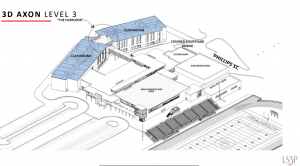 The third and final level of the design inlaces a third story above the academic classrooms to include more classrooms. 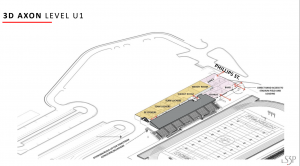 The first level of the stadium design will feature locker rooms, the weight room, and rooms for dance, band, and chorus. The band room will include direct band access to the stadium field and loading off of Phillips Street.

The football field will be raised to address draining issues and the grass field will be replaced with turf, allowing for year-round usage of the field.

How will a new high school be funded?

The new high school facility will require an increase to property taxes, however, how much of an increase remains to be seen as there are several factors that will determine the final increase to ad valorem taxes.

In addition to those shopping in Macon County such as tourists helping to generate the funds for the schools, increasing the sales tax would mean that all residents in the county would be contributing to public education funding. Right now, ad valorem taxes are only paid by people who own property in Macon County. So families who have children in the public school system who rent their homes, which accounts for a large portion, and nearly the majority of the public education population, aren’t currently contributing to funding the schools. A sales tax earmarked for public education would spread the cost burden of public education across the county to all residents.

Second- If the quarter-cent sales tax is approved in November — that is $2 million the county would not need to generate through other revenue sources, such as an increase to ad valorem (property taxes). Macon County is in an incredibly strong financial position, thanks in large part to the county’s existing fund balance. Just like when an individual goes to the bank to get a loan and the individual’s assets and credit score factor into what interest rates and funding they are qualified for — county funding via loans are the same way. Because the county has a strong fund balance, the county qualifies for a top credit rating, therefore having access to the best interest rates available and greater choice in lending options.

Macon County is in the midst of a property tax reevaluation, as mandated by North Carolina General statute. According to Macon County Tax Assessor Abby Braswell, Macon County’s property value is slated to increase from $8 billion to $13 billion. Because the county is mandated by state statute to produce a revenue neutral budget, because the property values are increasing, the county’s milage rate, which is currently at 40 cents of assessed $100 value, will be decreased the next budget cycle. Macon County residents are on track to see a decrease in the county’s milage rate — however taking on the substantial financial commitment of a new high school facility, without tapping into additional revenue sources such as the sales tax increase, would negate the milage decrease the county is currently expecting.

Because of those options — the county can take a gradual approach to funding the new high school — with step increases to the property taxes sooner — between 5-7 cents per $100 valuation — or wait and secure the needed revenue at one time with one large tax increase of 7-10 cents. For a house valued at $200,000, a 10 cent tax increase would mean an additional $200 per year on your tax bill. For the same house with a 5 cent tax increase, you would be looking at paying an additional $100 per year on your tax bill.

Third- Grant funding from the NC Lottery Need-Based Grant funding. The North Carolina Education Lottery has a specific fund for needs-based public school capital funds — which helps to cover the cost of new school construction and renovations. High Schools in the state can receive up to $50 million for the projects. Macon County applied for funding this year, but was not awarded the funding — however, the county intends to apply again. If approved, the overall cost of a new high school could change significantly — up to $50 million.

Jerry Moore is in favor of the 1/4 cent sales tax and explained that approximately 45 percent of retail spending in Macon County is transacted by visitors, which would benefit the county’s bottom line.

“ This alternative funding method will allow us to keep our property taxes fair and reasonable for our residents, while still allowing us to meet the demands of our county’s future,” said Moore. “Franklin High School must be replaced to address the inadequacies of the current facility. The school board and commission will need to continue to work closely to get the new Franklin High School project started immediately.  Early childhood education is critical to the success of our children and the future of our county and country.”

When asked about his stance on the sales tax referendum last week, John Shearl said that voters will decide in November, however when asked during the primary, he stated he did not support the increase, “Maintain what we have and explore what we need,” said Shearl. “How are we going to pay more? Can we pay more without raising taxes? No!” Speaking specifically about his stance on the proposed new FHS facility, Shearl stated; ““I would love to see a brand new school for our children however with us being in a recession, people living paycheck to paycheck, inflation at the highest in many decades, the high prices of medicine, groceries, gas, heating cost skyrocketing, every other costs extremely high and businesses closing because they can’t get help, the cost to build at the highest that I have ever seen and interest rates are extremely high, etc. How are we going to pay for it or any other project?”

Ronnie Beale stated that the he supports both the sales tax increase and the proposed new Franklin High School facility.

“Over the years we have continued to spend money at FHS which is the same as putting a band aid on a major wound.  I think a new high school is vital not only to our students, but to our community in many ways.   We must continue to give our students the best opportunities to succeed,” said Beale. “I support the quarter cent sales tax for several reasons. It will generate approximately 2 million dollars in revenue.  This revenue will be earmarked for education, which will help in keeping our ad valorem taxes low.  Since we are the only county in the far west that does not have the quarter cent sales tax, it will keep our money local instead of our neighbors receiving it.”

Danny Antoine stated in an interview with the Macon County News that he did not support the sales tax referendum and stated that he doesn’t think it is fair to raise taxes when people are already suffering. He said he wanted to see what the new board of commissioners elected in November can come up with before moving forward.

Gary Shields, stated “I am 100% for the 1/4 cent sales tax and a new school facility. The topic of a new Franklin High School has been a conversation for over 20+ years. In the past 2 years, I have served on the FHS Project Facilities Review Team and was first involved in searching for a school site of at least 30 acres.”

Betty Cloer Wallace noted that the county is in need of a new high school, but needs to be intentional in the planning and funding and is apprehensive about how the quarter cent sales tax will be utilized. “We need a new county high school, but not a little toy high school shoe-horned into the current 20.4 acres site. A comprehensive high school should be at least 50 acres with easy access and egress, and facilities to house a wide range of programs,” said Wallace. ““I am in favor of the sales tax if it is clearly designated for schools without displacing other funding, which is unlikely.  The sales tax hike has been disingenuously oversold by our commissioners in several ways—primarily as revenue from tourists without acknowledging that most buying in our county is done by our own residents year round.  Also, the minuscule amount of revenue from the sales tax is not a drop in the bucket when applied to the exorbitant cost of the projected high school, a cost that conservatively will approach $200 million over the next three decades.”

Local and state review committees are currently reviewing the design plans finalized by LS3P to ensure they meet requirements and needs of the district. Once that process is finalized, which will be after the November election, it will be up to the new board of Macon County Commissioners to determine the project’s next steps.

As it stands, the project is still in planning phases. If the new board members do not support the current trajectory of the project, then they can vote to halt the project entirely.