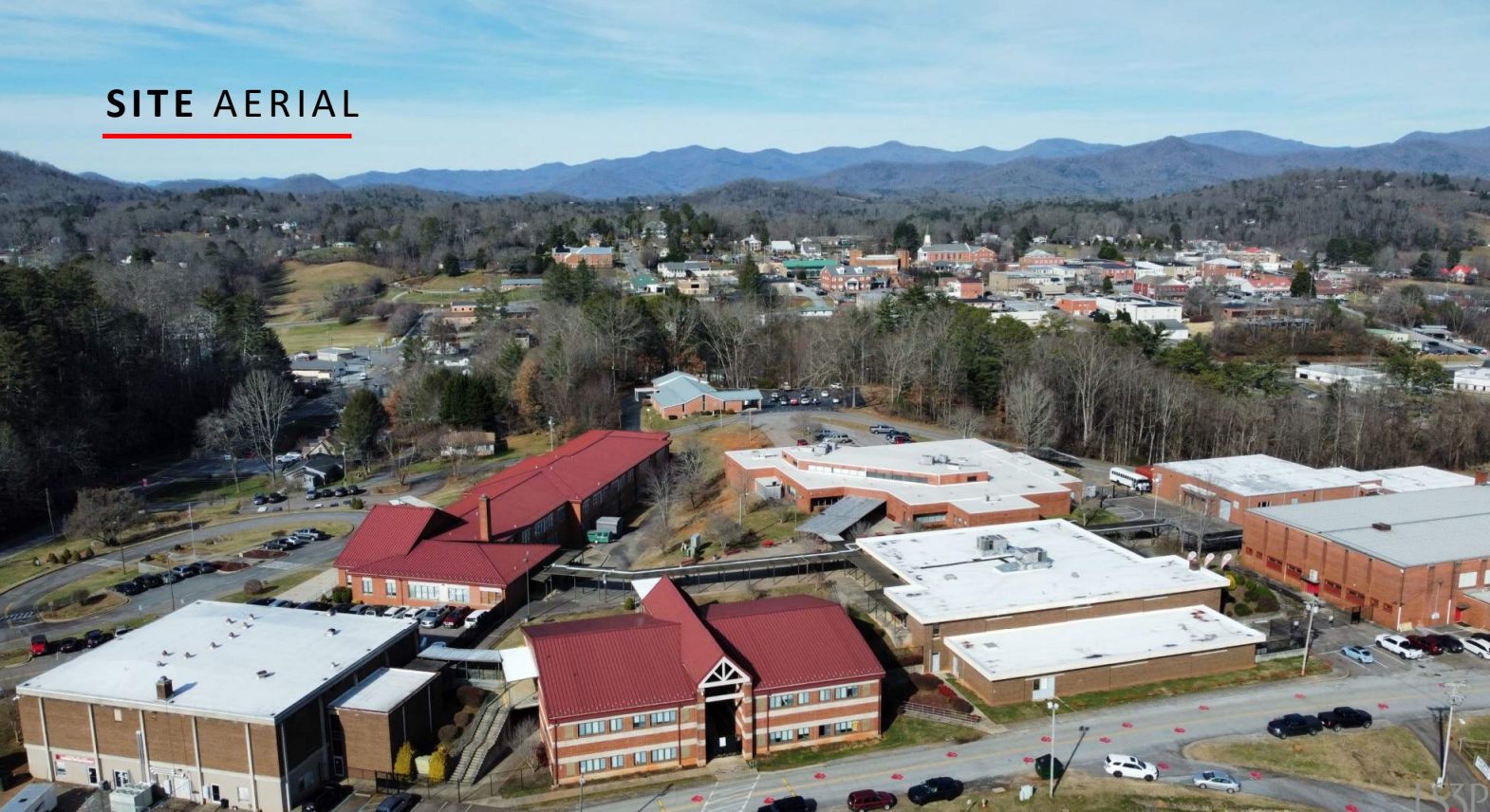 FAQ about the new FHS facility project in Macon County

In January 2015, members of the Joint Facilities Review Committee met at Fat Buddies in Franklin for lunch. The committee was comprised of county commissioners, board of education members, and leaders for both the county and school system. On a tripod at the front of the meeting room was a concept design and site maps for properties in Macon County where a potential new high school facility could be built.

While conversations about the need for a new high school in Franklin predate that 2015 meeting, that was the first conceptual plan I was privy to as a reporter in Macon County. The seven years following that initial meeting consisted of commissioner meetings discussing potential properties, school board meetings discussing future needs, and joint meetings debating feasibility and timing.

Over those seven years, both the board of commissioners and the board of education have changed members — as has county leadership and even the majority of reporters covering the events — however, I have been constant through all of those changes, and have attended virtually every meeting and conversation that has surrounded what the next steps for Franklin High School should be.

I say all of that because since the joint meeting last week where a vote was taken to move forward with a new high school in Franklin, there have been comments about the decision being random, or done behind closed doors, or not planning for the future or not meeting growth needs — however, in every situation, those comments are made from a place without context or background on how Macon County got from 2015 to 2022. As one of the few constants privy to the last 7 years of conversations, I hope to provide background information and details to better explain where the county is today in the process and how they got to that point.

When looking for property to potentially relocate FHS, Macon County looked for around 50 acres. Where did that 50 acre number come from?

North Carolina publishes “The Public Schools of North Carolina Facilities Guidelines” to provide school systems and designers consistent and reliable information o use as a basis for the design of new school buildings, additions, and renovations. According to state guidelines, for grades 9-12, schools should have a base of 30 developable acres with an additional acre per 100 ADM (average daily membership). For planning purposes for FHS, engineers used an ADM of 1,200 — which would put the needed space at 42 acres. The state also recommends an additional 10 acres for a stadium and spectator parking — getting Franklin High to the 50 acres the county identified.

When planning for the future of FHS, several variables were taken into account to determine future growth.

First — looking at data for the last 10 years, Macon County Schools as a whole ended the 2021 school year with 62 more students than in 2012. In 10 years, the school system as a whole gained 62 students.

Third-2020 Census- Planning for a new FHS facility lined up with the most current census data with the published 2020 census, which showed a net population gain for the county of around 2,000 or 6 percent growth. The county’s population increased 7 out of the last 10 years, with the overall population decreasing three years. While there was an average growth of .6 percent over the last decade in Macon County, the 65+ population was the fastest growing population— with an increase of 30 percent. The 35 to 49-year-old age group — the age group typically identified as being the age with students that would attend high school actually decreased 6.9 percent from 2010 to 2020. The youngest age group in Macon County, 0-4 years old also decreased from 2010 to 2020, with the age group population decreasing from 5.2 percent to 4.7 percent based on the 2020 census.

Why build on the existing campus?

While looking for 50 acres of centrally located property in Macon County for a new high school, multiple sites were considered. As with all property acquisitions, these discussions occurred in closed sessions, which is permitted under the state’s public meeting laws. Primarily, the parcels being considered were not made public, because had a site been considered publicly, it was likely the cost of such a site would have been increased.

Sites that were considered were around 50 acres — relatively centrally located — considerably flat as the terrain of a property and the potential grading needs to make it buildable could have easily doubled the overall project cost.

Without a feasible site identified, in May of 2021, the Macon County Board of Education requested the county build a new high school on the existing school campus. The county voted to move forward with exploring that idea based on the request and recommendation from the school board.

While some activities will inevitably be interrupted, such as a season of home football games, engineers working on the project are developing schematic designs that establish phases to allow for minimal interruption to student education.

Renovation and Repair Costs to FHS

Each year, the Macon County Board of Education reviews capital outlay needs across the district. Macon County provides the school district with funding specifically for capital outlay needs. Over the last 10 years, Macon County Schools has spent around $1.2 million in capital needs at Franklin High Schools. From $66,403 during the 2012-2013 school year for renovations to the high school dressing rooms to $58,712 in 2015 for repairs to the track to $15,046 for repairs to an elevator on campus in 2017, to $18,839 of new windows in 2018, maintaining the aging high school facility has become increasingly costly each year.

*Editor’s note- This timeline is limited to my personal experience. That does not mean there were things that were discussed or that occurred prior to when I began covering local government in Macon County in 2011, however, this timeline reflects what I can personally verify.

2015- Joint Facilities Review Committee at Fat Buddies regarding the need of a new high school.

Feb 2022- LS3P presents to BOC on renovations vs building

How will a new high school be funded?

The new high school facility will require an increase to property taxes, however, how much of an increase remains to be seen as there are several factors that will determine the final increase to ad valorem taxes.

Sales tax is often rounded up to 7 percent already, and those dollars get rolled into the redistribution of sales tax across the state. Out of the 6.75 percent sales tax, less than 3 percent is currently returned to the county. An education-specific 1/4 of a penny tax would be guaranteed to Macon County each year.

Second- If the quarter-cent sales tax is approved in November — that is $2 million the county would not need to generate through other revenue sources, such as an increase to ad valorem (property taxes). Macon County is in an incredibly strong financial position, thanks in large part to the county’s existing fund balance. Just like when an individual goes to the bank to get a loan and the individual’s assets and credit score factor into what interest rates and funding they are qualified for — county funding via loans are the same way. Because the county has a strong fund balance, the county qualifies for a top credit rating, therefore having access to the best interest rates available and greater choice in lending options.

Because of those options — the county can take a gradual approach to funding the new high school — with step increases to the property taxes sooner — between 5-7 cents per $100 valuation — or wait and secure the needed revenue at one time with one large tax increase of 7-10 cents. For a house valued at $200,000, a 10 cent tax increase would mean an additional $200 per year on your tax bill. For the same house with a 5 cent tax increase, you would be looking at paying an additional $100 per year on your tax bill.

Third- Grant funding from the NC Lottery Need-Based Grant funding. The North Carolina Education Lottery has a specific fund for needs-based public school capital funds — which helps to cover the cost of new school construction and renovations. High Schools in the state can receive up to $50 million for the projects. Macon County applied for funding this year, but was not awarded the funding — however, the county intends to apply again. If approved, the overall cost of a new high school could change significantly — up to $50 million.

Macon County Commissioners will consider approval of a contract extension with LS3P for the schematic designs of building a new facility on the existing campus of Franklin High School during the August 9 meeting at 6 p.m. The outcome of that vote will decide the future of the project.

It is important to note that as of right now, the only thing that has been approved by the county is to allow the planning process to move forward. No action has been taken to actually build a new high school in Franklin at this time.

We have reached out to all candidates in the Board of Education and the Board of Commissioners to seek their input if elected in November for the FHS project. We are waiting response from two commissioner candidates at this time, but hope to have them today (by the deadline given last week) to share with the public.