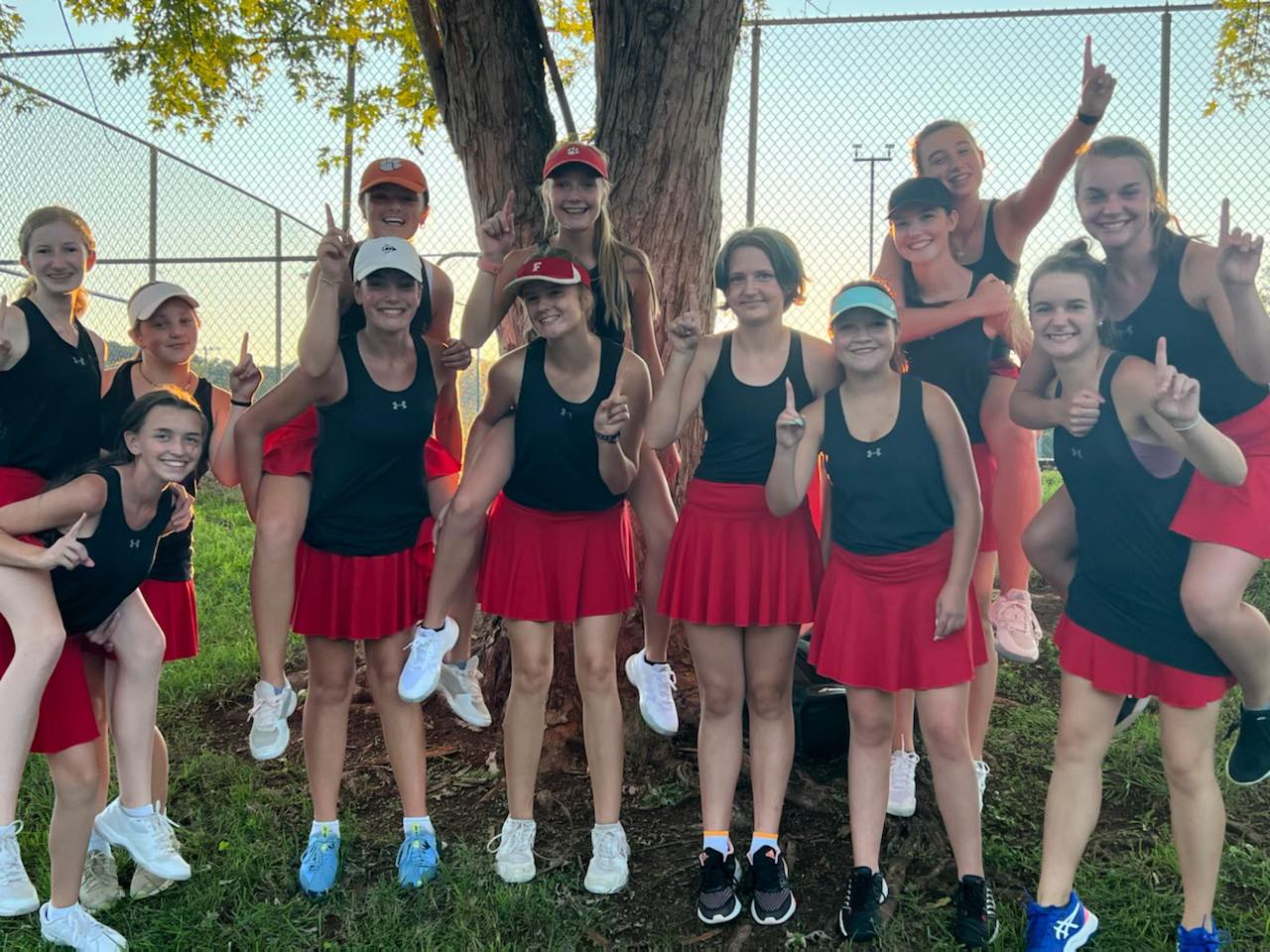 The fruit of that original team produced the 2022-23 FHS women’s tennis team who just completed the regular season with a perfect 14-0 overall record (12–0 in conference) and conference championship being named the 2002 Mountain 7 Conference Champions.

Alyssa Smith, FHS number one player, was the first to compete in that new middle school program and has helped to lead the women’s tennis team to earn a banner for the FHS gym representing their undefeated season and conference championship for the first time in 20 years.

“Many of the girls on this team are a product of that first middle school team and therefore have years of competition experience on some of our competitors,” said Bell. “This group also has spent countless hours collectively receiving lessons, practicing and hitting thousands of balls. Without the revival of the middle school program and each girl’s individual dedication and effort this team for sure would not be where it is at today.”

The last time the women’s team went undefeated was in 2009. That year they also sent six players to regionals and four players advanced to the state tournament. Last year, was the furthest a team from FHS has advanced in dual team playoffs, when the team made it to the quarterfinal round.

On Wednesday, October 19, the FHS women’s tennis team will host the first round of the Dual Team State Tournament at the Macon County Recreation Park at 4:00 p.m. The FHS team will take on the Forestview High School from Gastonia.

Abigail Angel and Maci Stork were selected all conference for singles and the two double teams of twin sisters Lydia Holland & Laura Holland and Kate Phillips & Alyssa Smith were selected for doubles. The girls will compete in regionals to be held in Hickory on Friday and Saturday, October 21-22. The first two rounds are played on Friday, with the semifinals and finals played on Saturday. A player must win both rounds Friday to advance to the state tournament.

“There are so many things that makes this group of girls unique, from their incredible work ethic to relentlessly positive attitudes,” said Bell. “So many of these girls are wise beyond their years, always considering coaches and teammates in their actions and words, keeping a mindset of team over self.”

“Focus, determination yet light heartedness continues to be unique attributes of this group, so many fun yet hard working personalities,” she added. “It’s rare to have so many individuals on one team at the same time that have such an incredibly high level of passion for the sport; many of the girls devote their free hours to being on court to receive extra instruction, playing in tournaments or hitting with friends.

“This group is levelheaded, as individuals but also as competitors,” said Bell. “Many of them appear calm on the court regardless of external factors. This often works to their advantage as they don’t let anything extra hinder their focus of simply winning every point that they can.”

There are many people in the community who have helped with FHS women’s tennis team as well as helping to build the middle and high school youth tennis program.

In addition to head coach Bell, coaches for the FHS women’s tennis team are: Head Assistants – Andrea Bosio & Rick Blanton and Assistants – Melinda Wilkins, Tom Miller and Lynne Jackson. These coaches have spent hours and hours on the courts with the youth here in Franklin, giving freely of their time and sharing their skills as well as their hearts.

“In addition to the many coaches, there are so many people who have helped the tennis program starting with Aaron Rinker and Sammy Gunter, both who currently coach the middle school team,” said Bell. “Rinker is an absolute gem and pours her heart into those players. She continues to be a huge asset to not just the middle school but both high school teams.”

The community has also been a tremendous support to the team such as Angel Medical Center in Franklin who provided the girls with towels and a tent for the team to use for shade. The FHS administration has been supportive including Blair King, Principal Michael Noe, Matt Bradley and Ryan Haley. The FHS Boosters have also went above and beyond to come out and support the girls providing food, uniforms and other equipment.

“Lastly, I would like to thank the parents who have been an incredible support, truly this team wouldn’t be where it is without so many of them pouring into their daughter’s passion and encouraging them to pursue tennis to the level that many of them are,” said Bell. “The parents are no doubt an all-star group in and of themselves.”

“This team has been an absolute dream to coach,” she added. “All around they are some of the best humans I know and a true joy to spend time with. They are funny and lighthearted yet train with purpose and attentive to coaching. To see a group like this be able to attain such success only makes it that much more fitting. They truly have and continue to put in the work and deserve all the best.”

“Proud could not even begin to capture how I feel towards this group of girls, they are solid in every sense of the word,” said Bell. “Not just on the court, but all around they are some of the best humans I know. Coaching this team is a privilege and deep joy. I would say this group is a once in a career type group, because they are all good teammates looking out for the team over themselves. They truly are a sisterhood and are all like best friends.”