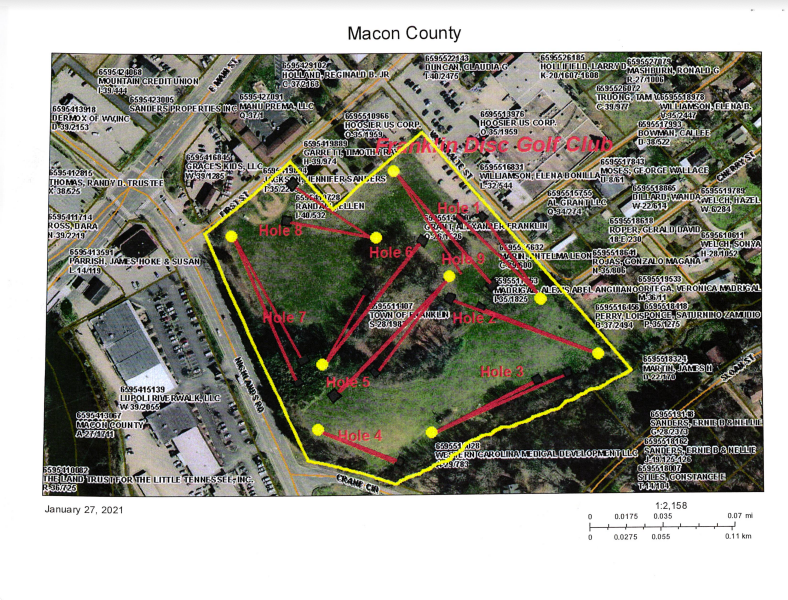 “What is the town going to do with the Whitmire Property?” This question has been put before the Franklin Town Council since the town purchased the land in 2004. Leadership on the board has changed with new mayors and board members, but the question has remained unanswered until last night when the town took solid steps toward finding the answer to that question.

At Tuesday’s special called meeting, the town voted 4-1 to use the property for recreation and possibly mixed-use housing. The motion gave the town manager, Amie Owens, and her staff the needed direction from the board to explore the use of the upper flat portion of the property for recreational use and the lower area for possible residential development and what it will take to accomplish these goals.

Owens suggested designating a section on the far side of the property for future use by the town, the middle 6.7 acres for recreation, and the remaining four-plus acres for housing as a starting point for the development of the property with the option to adjust the acreage as needed.

In addition, Mayor Jack Horton stated that the town will be required to do a phase 1 environmental, archeological study of the property and requested Owens find out the cost of such a study for the board’s consideration.

“One of the first things we will have to do will be a study to find out what lies below,” said Horton. “Any piece of property that belongs to a local government will require a study if you disturb the property that might have historical or archeological significance.”

The hour-long discussion of the Whitmire Property opened with Vice Mayor Joe Collins giving a brief history and background of the town’s ownership of the property. Collins is the only member on the board that was been present for the initial purchase of the property and all the meetings that have taken place since the purchase.

According to Collins, the town purchased the property with the intention of housing the town hall, police department, and public works. At that time, the town was in need of a town hall and was considering the old Lowe’s building when they noticed the Whitmire Property. After deciding it would be a perfect fit for a combination of these three town departments to be located on the property, the town paid $1.5 million outright for the purchase.

“The Whitmire Property would have been a perfect fit for the use for which it was intended,” said Collins. “However, at this time people were giving seminars and talks with the main point emphasizing to make sure your town hall is downtown. We were advised to not abandon our downtown, and it woke some of us up.”

At that time, the Scottish Tartan Museum was located upstairs and the police department was located downstairs in the current town hall. According to Collins there was already friction between the museum and the town, so the museum was relocated across the street at its current location, and a new facility was built for the police department freeing up the current town hall.

Although the original intention for the property changed, Collins said he thought the purchase of the property was still a good investment for the town. The town had a nice piece of property with everything needed – water, sewer, natural gas, close proximity to downtown, and good access. He also stated the town made the right decision to keep the town hall downtown.

Collins also spoke about the study that was completed in 2018. The town paid $14,000 to WR-Martin Management Consulting to assess the Whitmire Property to identify potential future uses of the property. The consulting firm determined the top three potential uses – passive recreation cultural use, land banking and mixed-use development of housing and commercial development by ranking them based on the number of positive community factors.

However, the town did not get a good feel from the study as to what they should do with the property, and without any such direction the town chose the land banking option. Land banking is the practice of collecting parcels of land for future sale or development. With this option, the Franklin Town Council choose to hold the Whitmire Property for future development and took no action to sale or develop the site.

In the 2018 study using the property as a passive recreation cultural area received the most positive community factors. In this option, a recreational area could be developed on the site which could include picnic areas, parking, restroom facilities, and a connection to the Greenway trail. The passive park could incorporate an amphitheater with stadium seating or the construction of a covered picnic shelter pavilion, walking trails, dog park, and other recreation uses. A passive recreation area could become a community destination, linking the downtown area, the Little Tennessee River Greenway, the river, biking, and pedestrian routes, and culture assets.

Town Council member David Culpepper spoke at length about the need for recreation for the youth of the area.

“You cannot continue to ignore the most important demographic in our community continually,” he added. “The Whitmire Property becoming a park would do more for this town than any other use that could be on that site.”

Selling the Whitmire Property has always been an option for the town. Collins stated he always felt the town would get their money back for the property, but over the years there hasn’t been a lot of interest in the property. The town had one offer which was not considered as it was well below what the town paid for the property.

Horton also told the board the property has been considered as a potential site for industry and manufacturing jobs by the Macon County Economic Development Commission. Although marketed as such, the commission has never had any serious offers or interest in the property.

Salain spoke of the tremendous need for housing in the Franklin area, and that she would like to see the town consider using some of the property for residential development. The property is zoned Commercial 2 (Secondary Commercial) and could be used to establish a broad range of general commercial activities including some type of housing development.

Town Council Member Mike Lewis stated he was open to exploring all options for use of the property including recreation and housing, but he expressed that whatever the board decided he wanted it to be a unanimous decision.

“At the end of the day, the board needs to be unified in our decision about what to do with the Whitmire Property,” said Lewis.