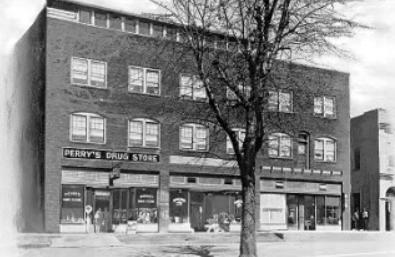 More than 95 years after the Scott-Griffin Hotel first opened it’s doors, the town of Franklin has partnered with local stakeholders to restore the four-story 16,500 sq ft building and renovate it with the addition of a rooftop restaurant which will offer a 360-degree view of the Nantahala and Cowee mountain ranges.

The project is estimated to cost between $5 – $7 million with an anticipated job creation of 30. The restoration will transform the upper three floors, which currently sit vacant, into a 16-20 room boutique hotel with a rooftop restaurant. The lobby of the building will be located in the space of the old Art Room.

The hotel restoration is a public-private partnership with the Town of Franklin, the Jacobs Family, and Appalachia Community Capital through the Opportunity Appalachia Grant managed by Mountain BizWorks.

When the hotel first opened, the February 1, 1926 edition of the Asheville Citizens Times read, “New Hotel to be Modern One, Franklin Institution Expects To Eclipse Anything West of Here.” The article boasts the hotel brought a commercial hostelry to Franklin that stood superior above anything West of Asheville.

The Scott-Griffin Hotel was a joint effort in the late 1920s by three businessmen, Sam L. Franks, postmaster, H.W. Cabe, banker, and W.C. Cunningham, merchant and cost an estimated $50,000. The hotel was built in what was then the very heart of Franklin’s business section and was built to accommodate the old Sloan’s store building as well as Smith’s Drug Store, and a barber shop that was occupied by Lester Conley. Now, nearly 100 years later, the restoration of the hotel will keep that same business-centered initiative in mind to house businesses in the bottom floor in a shared space with the hotel lobby.

The original hotel had 36 bedrooms, a dozen baths, steam heat, a circulating system of hot water, hot and cold water in every room, and was furnished with the highest quality available. The bedrooms were all on the second and third floors, and kitchen, dining room, ladies parlor were all on the second floor.

While the hotel’s restoration will include a rooftop restaurant, the first of its kind in Franklin, the rooftop of the original building was a unique feature as well. Considered the hotel’s most attractive feature, the roof of the original Scott-Griffin Hotel featured a roof garden which commanded a remarkable view of Franklin and the surrounding mountains.

The three local men who constructed the hotel signed a five-year lease with Mrs. J. L. Farmer from Gainesville, Georgia. At the time, Farmer also operated the Princeton Hotel in Gainesville. Clarence Brown, a former traveling salesman announced his purchase of the hotel on October 17, 1929— Brown’s wife, C.S. Brown, managed the hotel along with People’s Market, which shared the hotel building.

The hotel, regardless of the name that hung on the front of the building, was not just a hotel serving tourists traveling across the South, but was a central focal point for Franklin residents for decades. The 1935 Asheville Citizens Times featured the headline “Franklin Plans Celebration on Fourth of July,” with details that the local Boy Scout Troop was in charge of the 1935 events which included a doll parade, games, athletic contests, a parade with floats, and dances at Camp Nikwasi and the Scott Griffin Hotel.

In February 1939,  the hotel was sold to Mr. and Mrs. R. L. Doc Bryson, natives of Macon County who had left the area at the time, and the name of the hotel changed from the Scott Griffin Hotel to Hotel Bryson. Mrs. Bryson (Laura Wild) was the sister of Mrs. Frank Jarrett (Sally)— the original owner of the Jarrett House — originally named Jarrett Springs Hotel— in Dillsboro.

By 1945 the hotel switched hands again and was once again sold and renamed this time dawning the name Hotel Montague after new owners, Mr. and Mrs. K. F. Montague. By 1946 the hotel had went from 36 rooms to 30 rooms with some of the rooms now having private baths and some connecting baths. The dining room, which was on the first floor, had an increased capacity of 44, with plans to expand that even further. The Montague’s owned the hotel for less than a year before the property sold again, this time to Franklin residents Mr. and Mrs. Walter W. Hearn.

The 1946 sale was said to have been around $40,000 and also brought John Hauser to Franklin to serve as the hotel’s manager. One of the first improvements Mr. Hearn completed was the installation of a public address system, on which the latest musical recordings were played during meal hours. The name was changed to Hotel Hearn.

Hotel Hearn was short-lived and shortly owned by Mr. and Mrs. Walter W. Hearn as it was sold to Dr. Furman Angel for $48,000 in August of 1946 at an auction. By the time Dr. Angel purchased the building, the hotel had 44 rooms and after purchase, Dr. Angel leased the hotel to Mr. and Mrs. F.S. MacConnell, of Toccoa, Georgia for a 10 year period.

MacConnell didn’t hold the lease long as she sold the lease to Miss Dorothy E. Bartman, a Florida resident. By 1949 the lease for Hotel Hearn had been sold to Mrs. Vera Savage’s who then sold it to T.J. Beasley of Clearwater, Fla. Once Beasley took over the lease, Hotel Hearn’s name was changed to Skyway Hotel.

On October 6, 1955, the Skyway Hotel closed its doors for the final time as an operating hotel. In 1955 Bill Bryant and his business partner J.C. Jacobs took over the entire Skyway Hotel. Around the same time, Mr. Bryant purchased Mr. Jacobs share of the business and renovated the lobby to be used as a sales section with the upstairs space being used for storage.

The fiduciary agent of the project is Opportunity Appalachia and is one of a selection of 34 projects to participating in the selected projects to create over 1,700 jobs and attract over $177 million in financing to develop manufacturing facilities; downtown development; community centers; health, wellness, and childcare centers; food and agricultural facilities; hotels; and retail enterprises in downtown and rural areas across Central Appalachia.

Once project technical assistance is completed, a highly visible Investor convening event will be held in early 2023 that will target both local and pre-vetted national investors, as well as federal and state funders. A curated web-based platform hosting prospectus/pitch decks will also be made available to facilitate investor due diligence.

With another smaller application round anticipated for September 30, for applicants in Tennessee and Virginia, Opportunity Appalachia is expected to assist a total of 40 rural and downtown Appalachian communities to structure investments in real estate projects that support strategies for economic restructuring and diversification. This builds on the 2020-2021 Opportunity Appalachia efforts, which supported 17 projects seeking to raise over $250 million in financing.

The program is supported by the Appalachian Regional Commission, the US Department of Treasury CDFI Fund, Truist, Goldman Sachs, and the Dogwood Health Trust.